This painting is not by Alexander Pope. It’s Richard Wilson’s View of the Thames at Twickenham c.1762 in Tate Britain.

This painting by Wilson is just the reason I’m reading I.R.F. Gordon’s Preface to Alexander Pope. It’s on the cover  – Pope lived at Twickenham – and it’s one my favourite pictures. If you’re walking from Richmond to Ham, Marble Hill House appears through a gap in the trees on the opposite bank, suddenly, like something beamed from Italy.  An almost audible Wow! The river is almost unchanged, and Wilson gets the lazy Sundayishness of that walk.

Thanks to this painting, I’ve been reading about Alexander Pope and painting. In 1730 he was asked which one he liked better, poetry or painting. ‘I really can’t well say,’ he replied, ‘both of them are so extremely pleasing’. Pope was at the centre of the early Georgian culture. His friends included fellow writers  Jonathan Swift and John Gay, architects like the 3rd Earl of Burlington, gardeners like Lord Bathurst, and the painter Charles Jervas. His poetry is a sharp and often very funny manifesto for modern taste. He writes about painting a lot – metaphorically, comparing it with poetry and landscape, and actually, writing about pictures he’s seen. He likes to use painter’s jargon, and – this is the interesting bit – he uses it very well.

This is from his Epistle to Lady* 1743, describing twelve portraits of women painted as nymphs and goddesses. Each pictures is as subtly painted, he says, as the sitters’ own character. It has to be. They are so changeable.

Pictures like these, dear Madam, to design,
Asks no firm hand, and no unerring line;
Some wand’ring touch or some reflected light,
Some flying stroke alone can hit ’em right:

Pope certainly understood exactly what effect the best painters were aiming for, and he uses their language. It could be Gainsborough talking. Pope could talk the talk. Could he walk the walk. I knew that Jervas had taught him painting, but I’d always thought it was just as a hobby.

The DNB surprised me, saying, So long as his sight held out he might, it appears, have made a living as a portrait painter, an art which he actually practised and in which he took instruction from his friend Charles Jervas. (His maternal aunt Christiana had married the celebrated miniaturist Samuel Cooper, some relics of whose work were bequeathed to Pope after the death of another aunt, Elizabeth Turner.) Poetry, however, a felt vocation for him, seems to have been the one obvious way out of his dilemma [as a Catholic, Pope was forbidden by Law from going to University or taking what he called ‘posts of Profit or of Trust’].

Gordon publishes an excerpt form a letter to his friend Lord Caryll, dated April 30th 1713 when he was twenty-two. He writes, ‘I have been almost everyday employed in following your advice in learning to paint in which I am most particularly obliged to Mr Jervas, who gives me daily instructions and examples.’ He was a published poet but it was a precarious career. Four months later he writes to his friend the playwright John Gay:

I have been near a week in London, where I am like to remain till I become by Mr Jervas’s help Elegans Formarum Spectator [Edmund Burke later translates this as ‘a refined judge of Composition’]. I begin to discover beauties that were till now imperceptible to me. Every degree of light or shade on a cheek, or in a dimple, have charms to distract me… I have thrown away three Dr Swifts, each of which was once my vanity, two Lady Bridgewaters, a Duchess of Montague, besides half a dozen Earls, and one Knight of the Garter. I have crucify’d Christ over againe in effigie, and made a Madonna as old as her mother St Anne. Nay what is more miraculous, I have rival’d St Luke himself in Painting, and as ’tis said an Angel came and finished his Piece, so you would swear a Devil put the last hand to mine, ’tis so begrimed and smutted. However I comfort myself with a Christian reflection, that I have not broken the Commandment, for my pictures are not the likeness of anything in heaven above or in earth below, or in the waters under the earth.

How do we read between the lines of this camp banter? However bad his pictures were, this still makes him sound rather good. Even with exaggeration that’s a lot of copies for a novice to do in a few  months. Is that how Jervas’s studio worked? Usually a trainee would spend months drawing before they were let loose on a brush. Richard Wilson’s pupils weren’t allowed to use colours for two years. Only then would have mastered form and tone. Pope’s tuition has something of the amateur crash-course about it. A real apprentice learnt the craft from the ground up, grinding pigments, stretching canvas, getting a feel for the bones of it before they learnt the technique. And drawing, constant drawing.

Pope’s letter to Gay is an interesting picture of Jervas’s studio in 1713. Lady Elizabeth Churchill Countess of Bridgwater, who died that year, was one of Jervas’s star sitters. There are many studio versions of her portrait, copies of this autograph version in Dublin. This or one of them may be the one that Pope copied from. 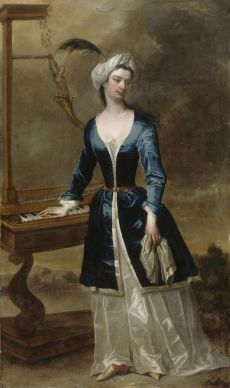 Pope also copies a Crucifixion and a Madonna. Were they Jervas’s too? I’ve not heard of them but it’s possible. Or paintings in his collection? Jonathan Swift was a great friend of Pope and Jervas, and Pope would’ve painted his copies with a real insight of the sitter’s character, and maybe different from Jervas’s. Those are portraits I’d love to have seen. Oddly, I’m sure that Jervas copies of Swift have come up at auction with old attributions to Alexander Pope. I wonder if any of them was real. Waterhouse dismisses Pope’s talent as a painter ‘studied long under his friend Charles Jervas but the results were undistinguished’, quoting a secondary source, MR Brownell’s Alexander Pope and the Arts in Georgian England 1979. But if Brownell’s source is the that Gordon quotes, then with no surviving pictures to back it up either way, Pope’s talent stands on his own opinion. I’ll walk between Waterhouse and the DNB. He must’ve had talent, but I’m not sure he had the temperament to be a successful portraitist.

*Women and Alexander Pope, an interesting subject for another time.