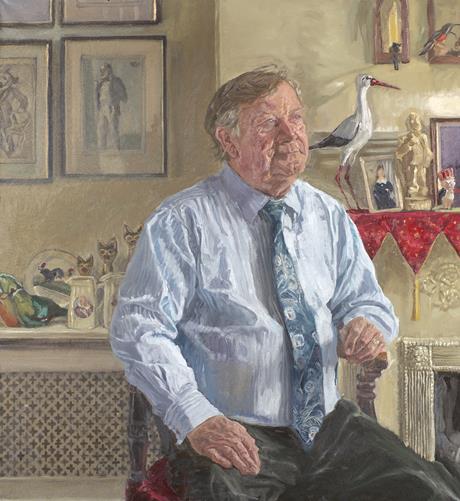 Back in 2007, I was at Parliament for the unveiling of James Lloyd’s portrait of Ken Clarke.

Ken Clarke is a man made to be painted. An incredible face. Watching him on telly this week, I wished that Lucian Freud was still alive. He would do him brilliantly. Lloyd’s portrait is an image of a man turning his back on (at that date) 37 years in Parliament and looking forward to his retirement, birdwatching and spending more time with his grandchildren, and that was the tone of Clarke’s speech at the time. David Cameron was leader of the Conservative Party. A new generation of One Nation Tories was to the fore. Time to hand over the baton.

So it’s remarkable, and a measure of the times, that 12 years later Ken Clarke, one of the Immortal 21 who defied the Government Whip on September 3rd, has been named by many for Prime Minister in a national unity Government (or Dame Harriet Harman, or Sir Keir Starmer). The thought of him in Number 10 gives many of us a warm feeling of instant security. That would be marvellous!   I wonder how to counteract 40 years of negative propaganda about the EU in six weeks. Perhaps a daily Ken Clarke fireside chat, dispelling confusion and prejudice, imparting genial wisdom and the wealth of vast experience, so that by the end, the entire country views our continued EU membership as, at least, the worst option except for all the others.

It saddens me when people diss Parliament at the moment – and are encouraged by the insidious tenor of the next election to see them as the enemy. People v Parliament, as Nigel Farage is teeing it up. Trust the People as Dominic Cummings mutters to journalists. Don’t be fooled. I worry that Cummings might care precious little about the people, and I fear that they’re a means to an end for his private goal of demolishing Parliament, with no care what to put in its place. But Parliament is what keeps us safe. The Tory members voting for conscience and the national over party;  Sir Nicholas Soames, visibly moved as he reflected on his 37 years of service, before unleashing an urbane and rumbling cannonade at the Front Bench – ‘whose serial disloyalty has been such an inspiration to so many of is’ – supported by Jess Phillips fighting like a tigress for her constituents, because she won’t let them ‘be used as a bargaining chips in a game.’ Caroline Lucas reminding members that the potential hardships of No Deal are more than mere ‘bumps in the road’ to most people. And lastly the Government backbenchers, asking on behalf of their anxious constituents for some outline of our current negotiations with the EU, and getting no answer, and forming their own conclusions from it. This is what Parliament is for. This is why we have a society as just and as open as we do. Beware of an election fought against Parliament, when it comes. The tone of an election predicts the government it creates, and I worry that an election won on a rightist, populist programme will herald a repressive, secretive and unjust government. How could it not? The voters who put it there will be the first to suffer, because it will have no purpose but to keep itself in power, and no rationale but to keep the country churning and divided, and to find scapegoats for its inevitable failures.

First thing this morning there was a lot of talk that the Government might disregard or finesse the anti-no Deal law passed today. It was said that they considered sending two letters to the EU on October 19th, the first asking for an extension, and the second inviting them to disregard the first. (It’s quite a witty solution: it reminds me of when Caligula pulled a Roman senator out of his seat in the theatre – he hadn’t clapped loud enough at the emperor’s acting – and sent him at once with an urgent message to the King of Mesopotamia: one huge and massively expensive journey later, the King opened a letter that said ‘Do nothing t all, either good or bad, to the bearer.’ ) This seems to have died down, I’m glad to see. Parliamentary Law, and Parliamentary scrutiny are our best defence against arbitrary government. I’m reminded of this fantastic scene in A Man For All Seasons, where Will Roper says that he would cut down every law in the country to go after the Devil, and More brings him down with a bang.

As I write this, John Bercow is announcing that he will stand down as Speaker from ‘the close of business on October 31st.’  He makes no apology for the way he’s interpreted the role of Speaker (applause) and says that he views his role as ‘standing up for members rights individually and for the rights of Parliament as an institution.’ Huge applause. Thank God for such a Speaker. (Followed by votes binding the Govt to release documents relating to Operation Yellowhammer, and the Prorogation, and another vote obliging the PM to obey the law regarding the anti-No Deal law, and finally – and we were long in bed by then – the failed call for a General Election, and at last the prorogation. Clive Lewis and Lloyd Russell Moyle made a show of trying to stop the Speaker leaving his chair, reminiscent of 1628, when King Charles I dissolved Parliament, and Speaker Finch was held in his chair by Sir John Eliot, Denzil Holles and Benjamin Valentine so that they could still pass the laws that the King was trying to stop.)

No time now for a roundup of the week’s tandem spectacular, last weekend’s England cricket and the rugger. No time for Mike Atherton’s rhapsodising in the Times last Sunday of Ben Stokes as Horatius on the Bridge (with Jack Leach as Herminius and Lartius – a mate asked me who was at the crease with Horatius); nor for England’s transformative substitution of Genge and Sinckler against Italy on Saturday, proving, as I like to believe, that matches are won in the front row. What a battle in the scrum in Ireland v Wales. A privilege to watch great props like Cian Healy and Taigh Furlong at their best. Ireland’s finishers quite there yet. Like England, Wales has incredible depth in props, (enough to drop key players like Rob Evans and Sampson Lee, they reckon). And to cap it all, a beautiful bit of sportsmanship in  when Dan Biggar told the referee he hadn’t scored a try, rather than waiting for the TMO.

A quick minute for these two pictures on the wall of a corridor at work. I hadn’t seen this one before, two dustmen and a dustcart by Thomas Rowlandson (1756 – 1827), drawn around 1790. The Yard in Brighton was open at least by 1820, and might – surely – be the oldest council waste depot still in continuous use. Curiously, the Victorian Society tells me, there is no comparative data on the subject.

This photo is pinned next to it. It shows the Glasgow binmen in 1955, still using the same sort of wicker basket. I love that. Interestingly, 1955 was the last year that horses pulled dustcarts in Glasgow, so there’s an incredible continuity. 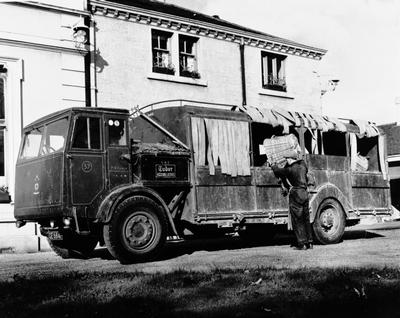