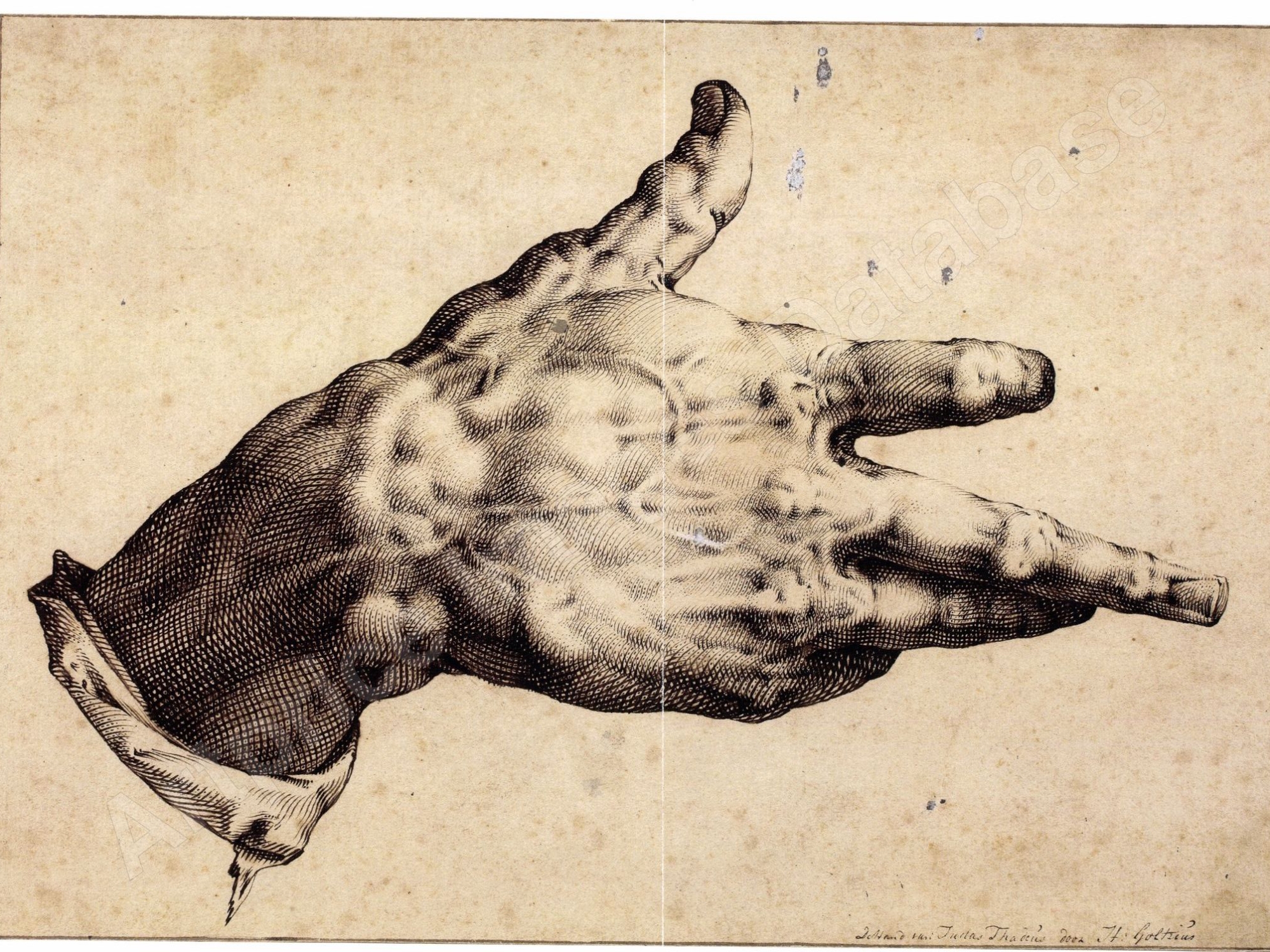 One of the most remarkable things about Goltzius’s art was the hand he made it with. This drawing, Goltzius’s drawing of his famous right hand, exists in two versions. One of them was sold at Christie’s 10th July 2014 lot 22 for £2,658,000.

Goltzius’s right hand was so famous, more famous than he face, that when he wanted to travel incognito in Italy he kept it wrapped up in case he was recognised by other artists. ‘Van Mander reports a moment of revelation almost like that of Christ at Emmaus, in which Goltzius announced his identity to his travelling companions, Jan Matthysz. and Philips van Winghen, by showing them his monogrammed handkerchief and unveiling his distinctive hand.’ (from Christie’s brilliant catalogue essay written with information from Dr Ilja Veldman; worth reading in full)

According to Karel van Mander, Goltzius’s friend and biographer, the artist had fallen into a fire when he was one year old. Both hands were badly burned and he was left unable to fully close the fingers of his right hand. Nevertheless he could still use a burin, the engraver’s tool, with it, and his right arm and shoulder were so powerful he could create a powerful sweeping line with it. The drawing of his right hand demonstrates that he drew with the left hand, showing him to be ambidextrous. And as a final flourish, because art is all about being a master of illusion, the drawing is in ink done to look at first glance like a print. An original masquerading as a copy.

The 1580s is the decade when Goltzius really owns his disfigured hand and parades it as a strength. The inscription at the bottom of the drawing says that it is a study for his engraving of Judas Thaddeus, from his 1589 series of ‘Christ, the Apostles, St Paul and the Creed’. It is even more clearly the model for St James’s hand in the same series.

Goltzius’s most famous print, ‘The Great Hercules’ 1589, clearly uses the artist’s own hand for a model. It is the largest print ever produced in the renaissance, from a plate measuring a Herculean 22 x 16 inches. There are various interpretations of Goltzius’s print, for when we look at the Haarlem Mannerists, but it’s as though the artist has looked at his own mighty hand and imagined the body that should belong to it.

One thought on “The multiplex talent of Hendrick Goltzius, intermission: the hand of the master”