With most of the country indoors at home this is a time for blogs, box-sets and big books.  Or as a guy said as he was leaving Iceland with his shopping yesterday, ‘right I’m back to movies, hours and hours of movies.’  Like the rest of the internet, the online art world has got the bit between its teeth, and there’s some brilliant new content.  Also a massive shout-out to Christie’s archivists working from home who were able to answer my stencil query recently. Thanks very much indeed!

Amy Lim, an Oxford doctoral student is posting a day-by-day trip round the Tate Britain’s blockbuster exhibition British Baroque: Power and Illusion. Amy was involved with the exhibition and took photos as it was being set up. Baroque would’ve been open til April 19th – we’d planned to see it in its last week – but it closed a fortnight ago, along with most museums, galleries and archives. Thanks to @amyplusthree, we can still see it.

Samuel van Hoogstraeten’s dog (1662-6) stands at the boundary of the painted world, as though about to step into the real one #BritishBaroque pic.twitter.com/G5nKNtqzAF

Philip Mould has been putting his time at home to the best use. ‘Art In Isolation‘ is a series of short online tours of his collection, housed in one of the most beautiful miniature Cotswold manor houses I have ever seen. He’s passionate about the way that old houses open themselves up to owners who love them, and with the help of a local historian he has made some fascinating discoveries about the house’s history and owners, as far back as the Domesday Book. His wife Catherine discovered a portrait of one the previous owners in a London antique shop, one of the mystical coincidences that do happen in the art world. 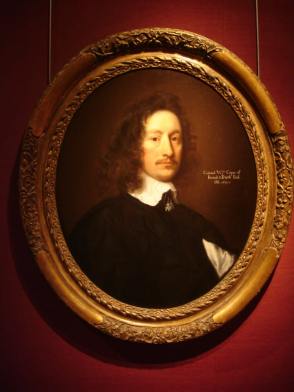 In episode 2, Philip showed us this view of a portrait painter’s studio. The style of the portraits and the type of interior suggests that it’s a painter working in Britain. You can’t exaggerate how rare it is to see inside a painter’s studio like this at this date. It’s a real snapshot in time. 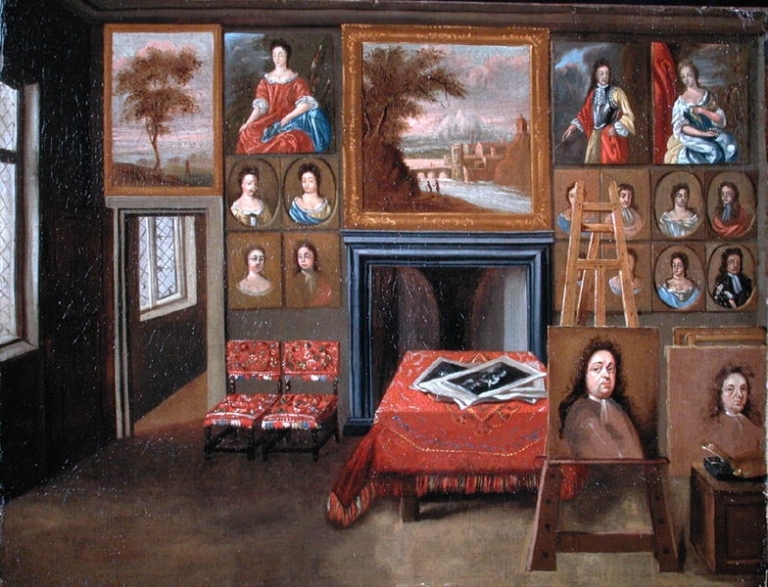 In one of John Cornforth’s books on English interiors (can’t remember which one) he illustrates a 1740s painting of four women having tea, and says ‘every detail in this picture repays study.’  So with Philip’s picture of a painter’s studio.  The portrait painter’s studio was intended to be as much like the interiors that the clients themselves lived in as a painter’s workshop.  Between smart Italianate landscapes in gilt frames – note the Lely panel frame over the fireplace – are finished portraits, waiting to be approved, paid for, framed packed and collected, and unfinished canvases where the master has painted the head and the drapery and feigned oval are still waiting to be painted in by an assistant. The head and shoulders portraits are probably the standard 30 x 25 inch size, and the three-quarter lengths 50 x 40 inches.  The picture itself is painted on a 30/25 turned sideways.

Philip feels that the unknown portraitist would’ve been a provincial artist rather than a fashionable London painter, pointing out that the handling is a bit naive.  I wonder if it was painted by one of the master’s assistants. Or by a further jobbing decorative painter?  But he is certainly right that painters created studios in which their clients felt at home, and this is very more of a middle class interior than a place for courtiers to hang out.  I like it.  It’s very liveable in.  And a painting you can hear as well as see.  I can imagine hearing the sounds of Covent Garden, or Fleet Street through the windows.

The ceilings are high – twelve foot to the cornice if the scale is right – and the bolection moulded chimney piece and cornice are bold, solid and unfussy, and date the interior to c.1660 and later.  Sash windows were not widely used til c.1700, and these wooden casements with their leaded lights would’ve been standard throughout the seventeenth century.  The back-stools with their turkey-work covers and bobbin-turned uprights are quite old-fashioned.  They probably date from the mid-century, like this example from c.1640.  It’s a distinctively English style, supporting the idea that this is a studio in England.

For a long time I could never understand the painting of the fireplace. What a weird shape inside.  Then I realised that it must be a painted board put over the fireplace in summer, a piece of chairoscuro perspective painting along the lines of this one at Snowshill.

There is a carpet on the table – as was the fashion, you see it in Dutch still-life – and on top of that a series of engravings of portraits. These might be examples of the artist’s own work, or of other painters, and they functioned both as an advertisement and a guide so that clients could choose poses and motifs for their own portraits.  They are casually splayed as though someone has just been flicking through them, an echo of the conversation between painter and client.  Throughout the painting, there’s a haunting sense of simultaneous absence and presence.  It’s surprisingly powerful.  The room is empty of people, but there are fifteen presences, fourteen clients and the man whose portrait is still on the easel.  Whether this is the artist’s self-portrait, or a favoured client, it clearly shows, as Philip says, that the painter is working on two canvases of the same portrait at the same time, proof that artists might produce two autograph versions of the same painting.  I remember when I first learnt that. It amazed me that artists would paint one or more identical versions of their own work, sometimes like this painter – and Sir Joshua Reynolds – painting the two in tandem.

The mystery painter has only just left the room, because they’ve put their palette and brushes down on the little table by the easel.  So who were they? This painting also exists in two versions.  The other – and I’m sure it’s illustrated in Cornforth –  belongs to an architectural historian but neither has a provenance. I said ‘man or woman’ before, because (if the man on the easel is not the artist) there were successful women painters in England at this date, and the portraits in the background remind one of Mary Beale (1633 – 1699).  The style of them dates the painting solidly to c.1690.  Beale seems to have retired from painting by the later 1680s, but this feels very like how her studio in London would’ve looked, or perhaps that of her son Charles Beale II (1660 – 1726).  But as anyone who has tried to attribute works from this period knows, there are a surprisingly large number of portrait painters out there, with tens and tens of them still to be identified.

Meanwhile, I have just finished reading Hilary Mantel’s The Mirror and the Light, the last part in her Thomas Cromwell trilogy.  More of that next time.  Stay well.