The Jordaens Van Dyck Panel Paintings Project has recently posted a trio of lectures on on the Project’s youtube channel.

In Charles I, Van Dyck and the Spanish Match: Connoisseurs and Collectors as Royal Diplomats, with new findings on four famous Van Dyck paintings  delivered on the occasion of the Charles I King and Collector exhibition at the Royal Academy, Justin Davies, Project Co-founder, shows how closely international diplomacy and art collecting were entwined in the 1620s and 30s.  Ambassadors were also expected to be art experts, and painters and picture dealers were employed as back channels with other European rulers, who communicated publicly with each other and their Courts through a shared understanding of artistic taste and Baroque style.  Justin Davies discovers new details surrounding the crack team of connoisseur-diplomats (and Van Dyck patrons) behind Charles’s trip to Spain as Prince of Wales in 1623, one of the strangest episodes in British diplomatic history, when the heir to the throne left England in disguise and turned up in Madrid quite unexpectedly, asking King Philip IV if he could marry his daughter.

Jacques Jordaens. An artist revisited; the man, the draughtsman and his time in Antwerp a lecture at the Pushkin Museum, Moscow by Dr Joost Vander Auwera, Project Co-founder and Senior Curator at  the Royal Museum of Fine Arts, Brussels, looks at Van Dyck’s stablemate in Rubens’s studio, a vigorous, realist whose work is often about the pleasures of everyday life. Jordaens inherited Rubens’s mantel of chief painter in Antwerp, and worked for Catholic patrons despite being a Protestant who was fined for publishing Reformist tracts.  Dr Vander Auwera adds new research – including the fact that Jordaen’s first name, thought for centuries to be Jacob, was actually Jacques – to the life of a painter who deserves to be better known to a British audience.

In the final lecture The Royal Hospital ‘Great Piece’: Van Dyck or not Van Dyck delivered at the Royal Hospital Chelsea, Justin Davies and I retrace a true life Edwardian ‘Fake or Fortune’, the story of a forgotten correspondence that we found in the NPG archive between Charles Dyas a Chelsea Pensioner and Sir Lionel Cust the Keeper of the King’s Pictures.  Dyas had researched the vast painting of King Charles I, Queen Henrietta Maria, the Prince of Wales and Princess Mary at the Royal Hospital, and had compelling evidence that it might be Van Dyck’s original, making King Edward VII’s painting at Windsor Castle only a copy.  Following on from their research over a century ago, the Project was able to make some remarkable new discoveries about just who painted the Chelsea picture. 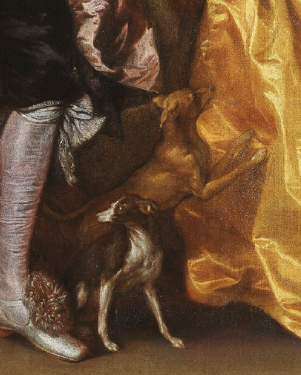