Scarcely has Obadiah Sim’s heir blown the dust off Barstow Hall when it seems an old evil has reawoken, and once more something terrifying hunts the fields at night.

Was there a connection between a happening of over six hundred years ago and now? The idea seemed just too fantastic and at the same time more than a little frightening.

Continuing with my book, the storyteller recounted that, after several more terrible happenings with two villagers were being murdered in the most horrible way and livestock being ripped apart, a rumour spread the village that the evil emanated from the Abbey, for the monks’ debauched behaviour was well known in the village. So it was that on one Winter’s evening a mob from the village descended on the Abbey and burnt it to the ground. The monks and nuns who escaped the blaze fled to the nearest Abbey at York.

After the fire the charred body of a very tall man had been discovered in the Crypt. The missing monk Bernard de Riche was well known for his exceptional height.

The villager’s fear of the Abbey had seemed well founded and their drastic actions vindicated because the evil happenings ceased from that moment.

It was well after midnight when I put down the book. There must surely be a link between what had happened in the 12th century and what was happening now. With those thoughts running through my mind I tried to get some sleep. Sleep was fitful, tossing and turning with images of screaming monks and nuns running for their lives from a monstrous wolf who towering over them scooped them up in its giant paws and stuffed them into its gaping jaws which were dripping with blood.

Then through these sounds of Hell I heard the voice of Obadiah crying out to me “Thank goodness you’ve come, you must help me. But first please listen to what I have to say. All my life I have been obsessed with witchcraft and the occult and I had heard of the old Abbey of Barstow and the rumours surrounding its demise, which is the reason I purchased the house in the Abbey grounds. I was also aware of the story of Christopher de Courcy and the Book he had been given by the Devil and the legend that after his execution the Book had been spirited to a Cistercian Abbey in Yorkshire. After many years my research led me to the old Abbey of Barstow and after my visit to the St Peter’s Church in the village and reading the small book on the Abbey’s history I knew I was right.

“Well I spent years digging in the Abbey ruins looking for where Bernard de Riche may have hidden the Book and finally I found it. Digging in an area close to where the Abbey altar would have been I came across some large stone slabs just below the surface. Moving them to one side revealed a set of stone steps winding down into the ground. Returning to the house for a lantern I then descended into what was the Abbey Crypt. Holding my lantern high I could make out that the Crypt was quite small, the light throwing up grotesque shadows on the walls. There were two rows of three pillars each—either side of a central aisle— holding up a vaulted roof. At the end furthest from the entrance I could make out a mound of earth, which looked like the shape of a grave. Remembering that the villagers of Barstow had found the charred body of Bernard de Riche in the Crypt all those years ago dare I hope that perhaps they had re-buried him there. In excitement I dug into the ground with my bare hands and a few inches down I found the blackened leg bones of a skeleton. Moving upwards I began to reveal the rest of the skeleton of a very tall man, There was no doubt in my mind that this was the skeleton of de Riche but I couldn’t see the Book until on lifting the skull the back of my hand brushed against something else in the ground. With my trembling hands I moved the skull to one side dug down under where the head had lain and there it was before my eyes, the Devil’s Book that had once belonged to Christopher de Courcy. Brushing off the damp soil and picking up the lantern I rushed from the Crypt clutching my treasure. By now night had fallen the sky was clear and the moon was full.

“Once back in the hall I could make out two words written in Latin on the cover ‘APERI ME (OPEN ME) The Book was bound by two metal clasps and with some difficulty I broke the clasps and opened the Book. Inside were written two further words in Latin ‘DIMITTE ME’ (RELEASE ME) on the facing page was the frightening image of a gigantic figure—with a wolf’s head— exuding total evil, on the last page two final words ‘COMBURET IGNI’ (BURN ME) Turning back to the page opposite the huge Werewolf before I had realised what I was doing I spoke the two words DIMITTE ME my voice echoing throughout the house. It was then that I remembered it was the night of the full moon! What had I done! As I stood there in the hall I was suddenly aware that something dreadful was happening to me I was becoming the picture in the Book, that of a gigantic Werewolf and on the night of each full moon I am destined to terrorise the countryside to quench my insatiable desire for blood. Please, please stop me, the answer is in the book”.

Those were the last words I heard from my uncle. I couldn’t sleep any more that night I lay on my bed going over in my mind what my uncle had said to me. How was I going to help him? A full moon was due that next night.

I rose early that morning and went straight to the landlord to find out what he knew about the attacks on the villagers and their livestock. He told me that they were convinced that the evil emanated from the house of my uncle Obadiah and that a group of them were planning to go there and burn it to the ground before anyone else was murdered. On hearing this I decided I must return to my uncle’s house. The driver of the pony and trap refused to take me so I had to walk the five miles. I arrived in the early afternoon and my first thought was to find the Book which was the cause of all this evil. Where in the house could it be, where would he have kept it? I searched all the rooms and found nothing and each passing minute brought the villagers closer. Then I had an idea that maybe he had kept the Book in the Crypt in the place where he had found it, in the the grave of Bernard de Riche. Picking up a lantern I rushed over to the ruins and remembering that my uncle had found the entrance to the Crypt near the altar of the Abbey church. In the fading afternoon light I worked out from the footprint of the ruins of the Abbey church where the Altar would have been and found an area of disturbed earth. Frantically brushing the earth to one side I found the stairway entrance to the Crypt. 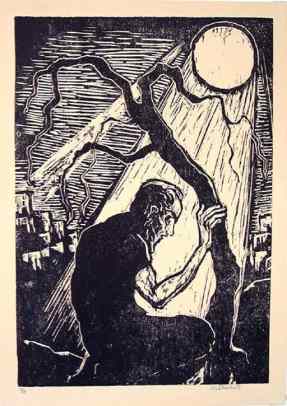 Holding the lantern before me I plunged down into the darkness. The Crypt was exactly as described and at the end farthest from the entrance stairs was the grave of de Riche. Bernard de Riche’s bones were still there and reaching down I felt in the mould for the skull. Brushing the damp earth to one side there it was its empty, hollow, sightless eyes staring up at me causing me to shiver in horror. Forcing myself to put my hands into the grave again where the skull had lain I found the Book.

I left the Crypt as quickly as I could for the late afternoon sun was setting fast and a full moon was due that very night. How was I going to release my uncle from his pact with Satan? For soon it would be too late for Obadiah and the evil would once more be free to roam the countryside. From somewhere Obediah’s last words came into my head, that he had said the answer was in the Book.

There were distant shouts and screams and I realised the villagers—intending to burn the house to the ground—had by now reached the gates of the park. In shock I dropped the Book and as if by a guided hand it fell open on the final page and I found myself starring at the two words ‘COMBURET IGNI’.  I ran into the hall and with all the rubbish there quickly built a fire in the large stone fireplace and as the last rays of the sun died I hurled the Book onto the fire. It sat in the middle of the flames for what seemed an eternity before it began to burn and as it burned the image of a huge howling werewolf began to materialise in the flames and to my horror stepped out of the fire into the room. The huge creature stood there before me in flames mouth wide open emitting an horrendous howl. Its yellow eyes staring at me with such loathing and hatred that in horror I closed my eyes. Then I heard the voice of my uncle it came quietly “Thank you so much I am at peace at last.” I opened my eyes, the werewolf had gone and in its place within the flames was the small figure of my uncle dressed in a white robe with a look of complete happiness on his face. As I watched spellbound the figure faded the fire died and the room fell silent.

The villagers had by now reached the house determined to burn it to the ground and I rushed out to assure them that the evil had gone forever. As I stood there with them a feeling of peace and tranquillity descended like a curtain.

In the morning to my astonishment the leaves of the trees were no longer brown and shrivelled but a beautiful green and the sweet sounds of birdsong could be heard all over the garden.

Hans Holbein The Bishop 1543 woodcut from The Dance of Death on pinterest.

One of five engravings of a Skimmington Ride (scene from Hudibras) Estate Consultants invaluable.com

Featured image The Hunt for the The Beast of Gévaudan 18th Century woodcut from cnet.com