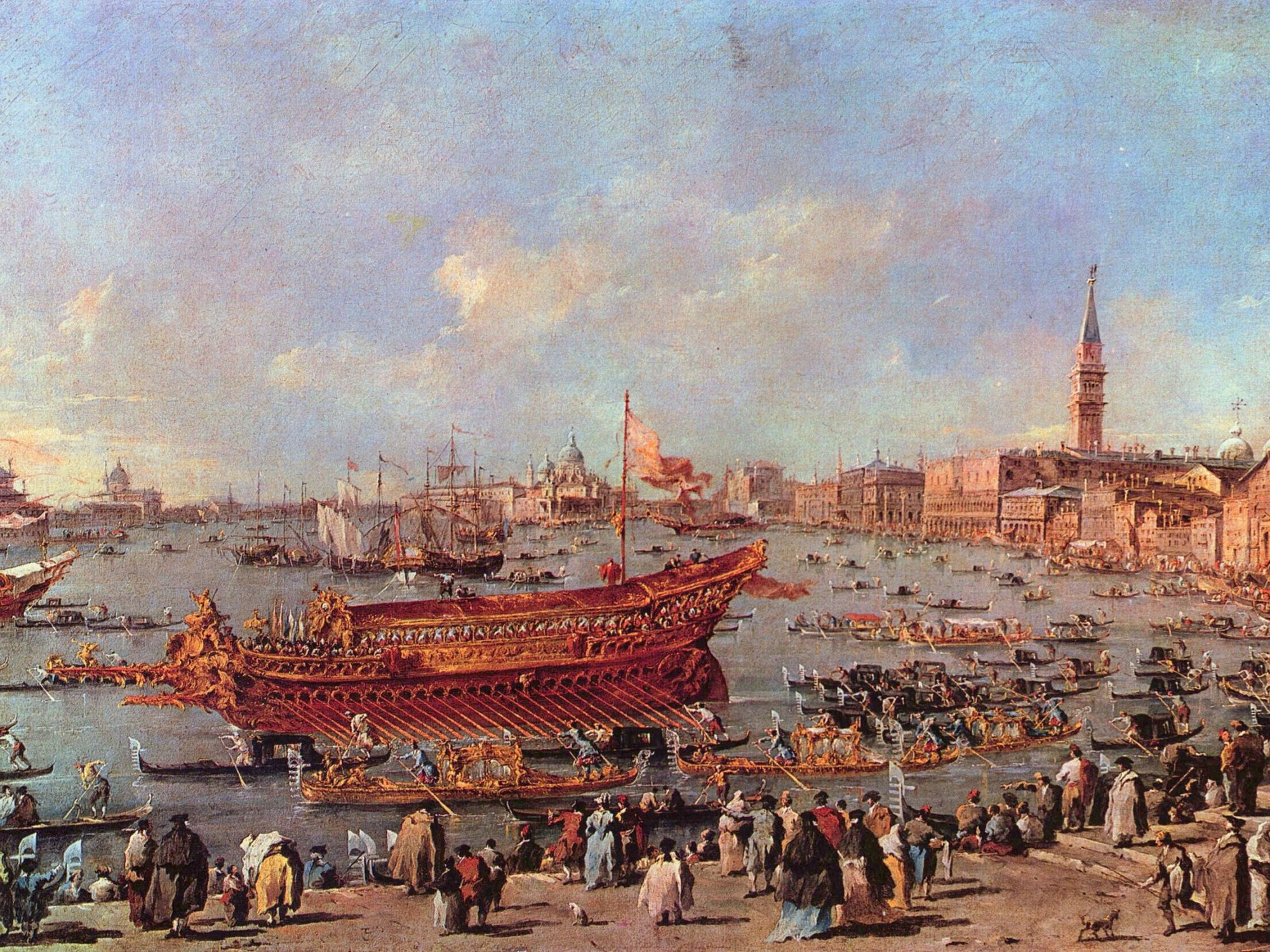 Cadogan writes from Turin, after a stay in Venice; he has a ringside seat for the ancient ceremony of the Marriage of Venice with the Sea; the Doge was rowed out on a vast gilded barge, the Bucentaur, and threw a gold into the sea with the words ‘we marry you Sea, as a sign of true and everlasting dominion.’ Venice relied entirely on the sea for her power, so the gold can also be read as a wise superstition. Cadogan’s letter from Turin is in Latin; his next three months later is from Nîmes, where he’s been recovering from a serious illness, and is in no state for Latin.

Charles to his brother William, greeting,

I found your very welcome letter here when I arrived on the 5th day before the Ides of this month (the 10th). I set out from Rome on April 19th and reached Venice on the first of May, when I saw the last two Venetian ambassadors whom I knew at Constantinople. They showed themselves the greatest friends and hosts to me, and I spend a thoroughly enjoyable time at their houses. I stayed at Venice for 26 days, and among many public and private galas I was at the annual Ascension Day Ceremony, the ‘Marriage with the Sea.’ I also had the greatest honour to ride out with the Doge on the Bucentaur, and I stood next to him when he cast the gold into the sea. He went from there to Church, and I was ferried in kind of skiff, which is called a ‘Gondola’ at Venice.

From Venice I made a very convenient journey across Lombardy, through Vicenza, Verona, Mantua, Cremona; but I can’t tear your eyes away from Venice without a line of Horace. ‘Heaving with publicans, sailors and ruffians’* That’s exactly what it’s like there at Ascension Time. I’ll gladly allow you your criticism, lest you think that a true friend can‘t be a bit critical. In fact I think the opposite. However much ‘de Dictu nihil curem’ came to mind, so did Horace. Truly and rightly, in all things I am yours etc.

I wrote to you from Rome on April 18th, the day before I left there, and I hope this letter of congratulations has reached you. Here I repeat my happiness, and I hope all is well. May all turn out the best and happiest for your wife, Father, and Mother. The sound health of your wife fills my heart with joy. Give her all good wishes suitable from a brother. from  I’m not surprised Loveday and Vatas are tottering a bit with age, nor that the Old Maids of Coley Park are withering for the same reason.** But Vatas is always green and never gets old. How are Blane and Becca?

I should think that Father will be settled in London by now, and that your own household gods will be happily installed in Chelsea. I shall set off from here tomorrow, after a very agreeable week with our friend Trevor. I’m going to Nice, and Trevor will favour me with his company for the first twenty miles, as far as Princess Carignan’s borders, where he’s hoping to install his household gods. I shall stay the first night – for the Opera – and then set off.

In my last letter from Rome, amongst all the congratulations, I mentioned my will, now in the hands of Father who has written about it to me again, saying that he will give it to you. Please let me know you’ve got it in your next letter, and direct the same à la Poste restante à Angers, where I’ll be on the first of August. I shall go via Nice, Marseilles, Aix, Avignon, Nimes. Toulouse and Bordeaux.

My you live and be well, dearest Brother.

P.S. You may tell me freely what you think of this, and all my future letters.

** Including Frances Jennings, who Cadogan wondered about marrying (June 27th 1788)

After a tedious and most dangerous Illness of three Months at this Place I’m now thank God on the Eve of my Departure for Montpellier, where I shall stay till Christmas, and where I hope to receive (in your elegant Latin) an answer to this directed to the Poste restante as usual. My Recollection (please God) will be sufficiently returned by that time, to answer you in that Language; tho not only not elegantly but even accurately. However I’m convinced you’ll not flog me when I see you next for my faults and blunders, I hope we shall meet at Reading next Summer in good health. I’m advised to remain the winter in these Parts and on no account to think of Spain; all which I shall accurately observe: I’ll not trouble you with a tedious account of my past Illness; suffice it to say, that by the Grace of the Allmighty, I have escaped so as to pass a few more years comfortably in England among my Relations and Friends in which list you stand very high, as well as Mrs Cadogan; to whom I beg my Love, and who I sincerely hope is well. I hope also to find you both so, and be perfectly so myself next Summer. In the meantime I hope to hear from you as usual, and that you’ll be so kind as to get me on in my Latin, which I am very anxious to recover, since my travels in Italy. I go tomorrow to Montpellier, to stay til Christmas; and hope to be favored there with a Latin Letter from you, and I’ll favour you with my inaccurate/contemptible Stuff from thence.

This place affords some venerable Remains of the Old Romans; viz: an Amphitheatre, a Watch Tower, and a Temple; was formerly a large City on a Hill; but is now a very near Country town at the bottom of the same. I’ve not an acquaintance but Cottrell in the whole Place, as you may easily imagine. I’m glad you received the Letter he wrote you upon my Order. Pray give me an account of Loveday and Vatas, Blane, The Veteres Ancillae Colienses etc: in your next; which I shall look for with great Impatience at Montpellier, and believe me Dear Brother most affectionately yours CH Cadogan

P:S: Cottrell begs his Duty to you. It is a long long time since I heard from you.