Pog the dog died last month, aged fourteen, much loved by all his family and friends. He was a red miniature pinscher. Minipins are originally bred from Italian greyhound, German terrier and dachshund. They’re either a German lapdog traceable back to the Seventeenth Century, or a Nineteenth Century terrier bred for ratting; opinion is divided.  Pog’s character suggested both. At 13″ he was taller than the breed standard by an inch. He was the most powerfully-built minipin we have ever seen, and he could run like a hare.

He was afraid of nothing –  he would hold his own against larger dogs, and growl at ghosts – but he hated going out in the rain. If he was caught in the rain he could bear it with half-closed eyes and grim determination. But if it was raining when he went out to the lamppost you had to take an umbrella for him.

Pog used to go with us on auction viewings and gallery visits. A guy sitting opposite on the train drew this in his sketchbook years ago. It’s a brilliant drawing. He gets Pog exactly right, officially asleep but watchful and listening. Note the flickering right ear.

He made great friends, and when was too old to come with us on every trip, he still loved visiting two friends of his at their gallery in Surrey, sitting with us when we had tea and crunching chunks of digestive biscuit in his cheekless mouth. A magical sound. A trip with Pog was always an adventure. One night we were standing under the Ritz Arcade, when I saw Lucian Freud, not only one of the greatest painters in oil, but one of the greatest painters of dogs, coming up Piccadilly towards us. He was wearing a long grey tweed coat and looked like Gandalf. As he passed us he seemed for a beat to dart over Pog just like a hawk, to fix his image with a painter’s eye. His gaze was so intense that his eyes glow in my memory of it. Pog took this in his stride, but I was dumbstruck with awe.

One summer we were so keen to be on time to get to a village auction to bid on a Sixteenth Century Judith and Holofernes (catalogued as Nineteenth Century, and now in the collection of the Shakespeare Birthplace Trust) that we got there at Dawn. We had a drink at the pub when it opened for the draymen, then slept in the car til the sale started.

This drawing was in the same sale, described in an old label on the back, An English Bull-terrier pup by Joan Warburton c.1940.

Bull-terrier pup was selling without reserve and well below estimate. I put in a quick lucky bid.  It’s a beautiful drawing, it looks like Pog and it’s a memory of a brilliant day with him. We hung it on the wall, and I’d never looked into it further until last month.

The portrait and landscape artist Joan Warburton (1920 – 1996) was at the East Anglian School of Painting and Drawing in Dedham from 1937 to 1940, a contemporary of Lucian Freud, who was there from 1939 to 1942. Their linear drawing style is very similar at this date. Warburton drew the famous early portrait of Freud half asleep at his desk in a sweater (Sotheby’s March 10th 2005 lot 26). Comparing the hand holding the dog with Freud’s spadelike hands in Warburton’s drawing, it can’t be his hand in the drawing. Warburton also drew My Belgian hare on Cedric’s knee (Reeman Dansie April 9th 2019 lot 1111). Cedric Morris the artist and plantsman co-founded the East Anglian School with his partner the English surrealist painter and designer Arthur Lett-Haines. Judging from their hands in this photograph on the jacket of John Potvin’s book (Lett-Haines on the left, Morris on the right), either of them might well be holding the dog in the drawing. It’s unproveable, and adds nothing to the price of the picture but much to its value. And I like how important animals obviously were to them.

More recently, Pog inspired Zak to take up photography again, and for the last eight years Pog has been Zak’s photographic muse. Here is with Zak’s mother in a photograph from his his project on Alzheimer’s Thinking Through Fingers.

With my mother at Bramber Castle around Pog’s birthday, 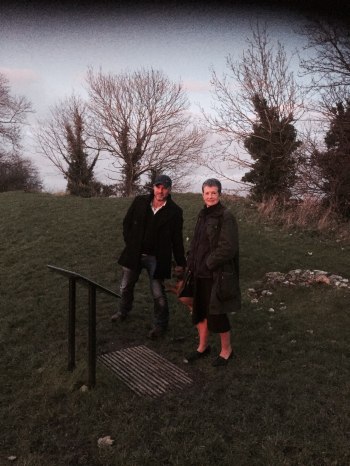 and on holiday with us last September, chasing a tennis ball on a beach in Cornwall.