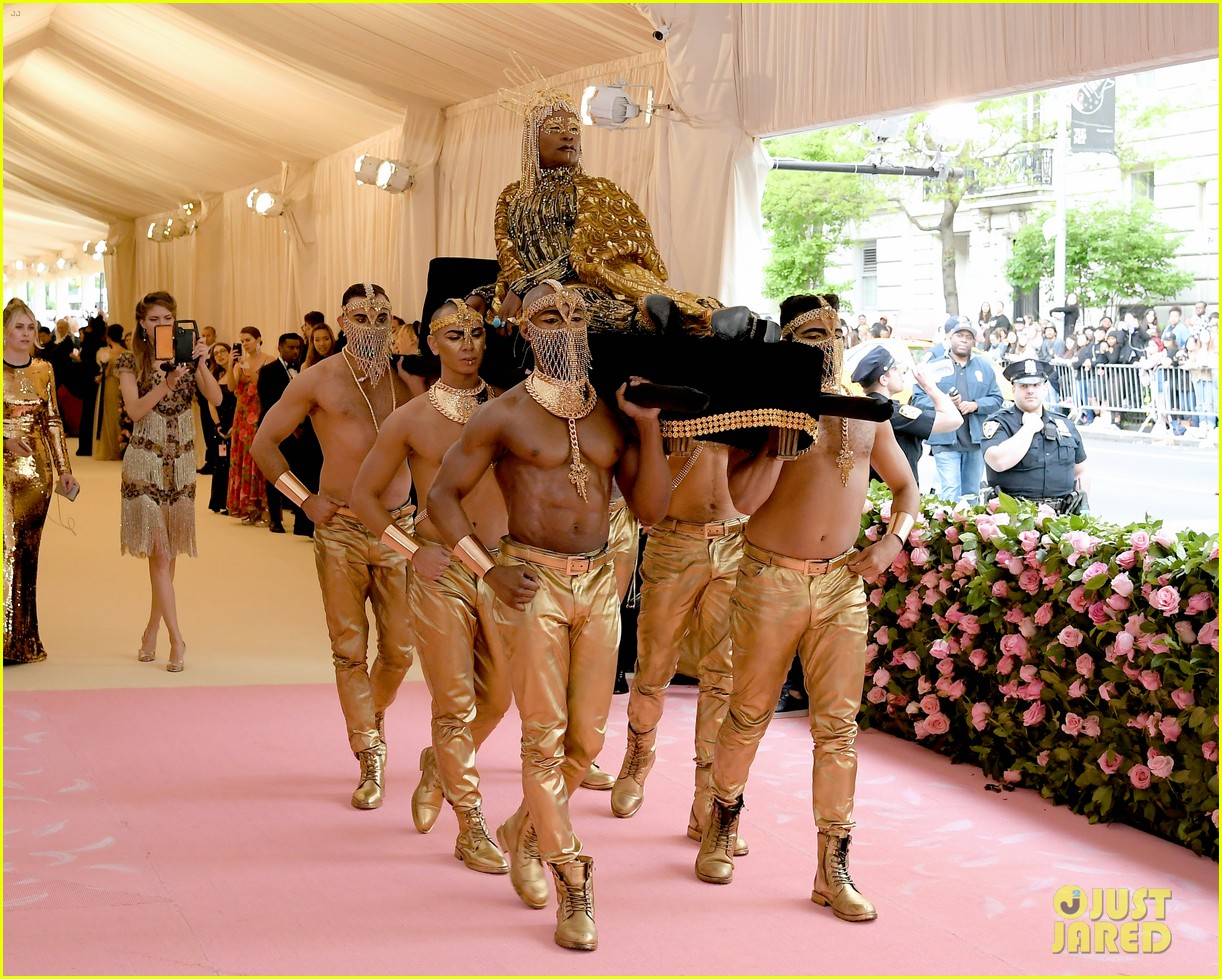 This Friday, we found ourselves watching – with much fast-forwarding – a four hour youtube video of arrivals at the Met Gala in New York. I had heard of the Met Gala, but I didn’t know what it was in aid of. The Gala raises funds for the Costume Institute, and the theme is taken from the subject of that year’s annual exhibition, held at the Metropolitan Museum of Art in New York.

It’s not usually the sort of thing that interests me, but I’d heard that the actor Billy Porter – winner of a Golden Globe for his fantastic performance as the MC in the also fantastic FX series Pose – was carried in on a litter, and that I wanted to see. 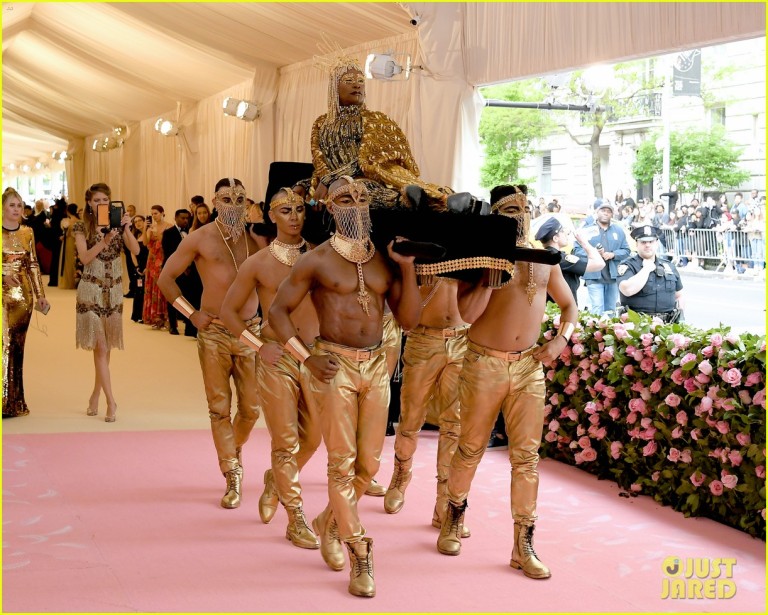 I like Porter, and I was reminded of Jean Cocteau who arrived at a smart party in Paris just the same way, over a hundred years ago. All much in keeping with the 2019 Met Gala theme ‘Camp.’ (This year’s exhibition is based around Susan Sontag’s 1964 essay Notes on Camp.) It is said that Porter announced himself with the words The category is… Old Testament realness!

I like this enormously. Zak had already shown me Madonna’s medieval performance, complete with Like a prayer sung in Latin by monks, for the 2018 Gala.

At the Met Gala – Zak explained – each guest gets an entrance proportional to their donation to the Costume Institute. And between the crowd-stopping names and costumes, there were others less famous arriving with less fanfare, and gaggles of the unknown, log-jammed and waiting while the great ones repeated their turn for the crowd.

What did this all remind me of though? Certainly the 18th Century crowds waiting in the streets to see what Georgiana Duchess of Devonshire would be wearing to the next ball. But something earlier and (even more) spectacular, the great extravaganzas of the Renaissance and Baroque courts.

The Met Gala reminded me of Jacques Callot’s famous engravings for Combat à la Barrière, a tournament staged by the Duke of Lorraine at his court in Nancy. The Duke and his friends fought for the favour of the Duke’s cousin, the Duchess of Chevreuse, who had just been exiled from France for her part in a plot against Cardinal Richelieu. The competitors entered the great hall where the combat took place on magnificent floats, in the guise of Classical gods and heroes. The effort that went into all this is just extraordinary, and like the Met Gala, you could spot the richest and most celebrated by the size of their entrance and their entourage.

The Duke’s brother Henri – as Pirander, ‘the man of fire’ – rides a salamander with his soldiers. An orchestra and singers go before him on a phoenix….

Messieurs de Couvonge and Chalabre, who were probably rather cool, arrive standing in the jaws of Hell, with flames, Furies, devils and three-headed Cerberus.

The Prince of Phalsbourg, the reigning Champion, arrives with drums, trumpets and torches, lutenists singing his praises drawn in a chariot by Fame and a heavenly throne complete with gods going before him.

The Duke of Lorraine, of course, played the Sun, preceded by floats representing a terraced garden pulled by living trees, the Forge of Vulcan (designed by Callot) and Apollo with choir and orchestra.

The Comte de Brionne came as Jason, with Tritons but without his Argonauts, curiously. The Golden Fleece hangs on a tree, complete with monster; the Temple of Fame awaits.

While Messieurs de Vroncourt, Tyllon and Mariment clubbed together to arrive with great style on a whale accompanied by a lutenist riding a dolphin. The drawing of the whale’s suggests that the head might have been articulated, and could have been turned fiercely side to side, steered by the driver sitting on its forehead.

The soldier Monsieur de Macey makes a good, plain entrance, with his officers and a mere dozen of pipes, drums and torches.

and a view from the side of the actual combat taking place, with two competitors facing each other on foot with lances across the barrier. Happily the whole thing was a fix, no one was injured and the Duke won. 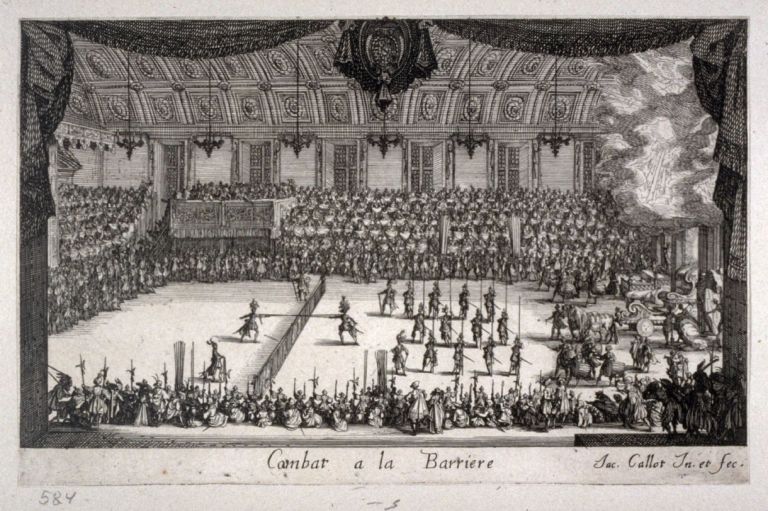 These court pageants and extravaganzas are fascinating for art historians because they were central to the artistic culture of the time. Most of the work that court painters – including great artists such as Holbein and Rubens – did in designing and producing sets and effects for these spectaculars is entirely lost, because they were one-off events. Everything that couldn’t be recycled for the next production would be discarded. There are rare survivals, such as Inigo Jones’s costume designs for Court masques. Music historians are luckier perhaps, because the music survives in some cases, and literature still has entire masque scripts by Jonson and Milton.

The intermedi – big musical numbers performed between the acts of a spoken play – survive from the wedding of Ferdinand de’ Medici and Christina of Lorraine in 1589. That’s forty years earlier than the Combat but this video recorded in the 1980s as Una Stravaganza de’Medici gives a superb idea of what the audience would have seen and heard in 1627. Hence my appreciation for Madonna’s performance at the Gala in 2018, which has the same impact these early performances must have had. This scene of Apollo killing the dragon at Delphi is one of my favourites, and probably as real/unreal to us as the original staging would have seemed to the first audience. Gods entering on clouds would have been winched down to the stage, along with their musicians. The operas performed at Versailles for Louis XIV had so much moving scenery that only sailors had the strength and stamina for the constant pulling on ropes, and the backstage was run by the French navy.

As I watched the Met Gala on Friday, I thought the backstage must have been equally in plain view during a pageant like the Combat. The same visible yet invisible dressers scuttling forward to trim and rearrange – wonderfully unmentioned either by Callot or by the radio describing Lady Gaga’s triple dress-change on the red carpet as ‘miraculous’ – must have been in constant attendance on the Duke of Lorraine and his friends as they inched forward into the great hall that night in 1627.