There’s a beautiful custom in Brighton, of leaving things you don’t want out in the street, for people who might want them. 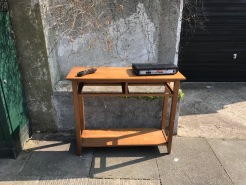 It’s a thin line between free-cycling and fly-tipping, so presentation is key. In Lounge, an installation on my street recently, a trio of essentially worthless objects are arranged in a cozy serving suggestion. It worked, and the table was gone within the afternoon. Sometimes this wit goes too far, and a post-it on a filthy mattress saying free please take is considered in poor taste. Good stock goes fast. We got our ironing board this way, as well as a chair and a chest of drawers. And there are some remarkable things. A while ago I found a set of oil paints in a chest of drawers. And recently, this. The print is on metric paper, so unlikely to date from the 1960s, but it plunged me into a moment of history I knew nothing about. 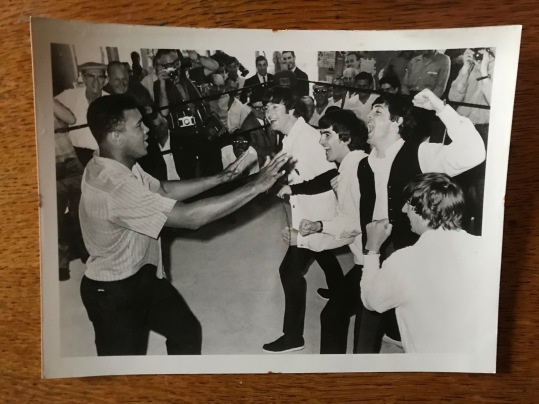 Cassius Clay with the Beatles in Miami 1964, photographer unknown.

Gosh, I thought, that’s Muhammad Ali, and then I recognised the Beatles. It was an extraordinary meeting of talents, that very nearly never happened, because the Beatles were expecting to a shoot with the reigning World Heavyweight Champion Sonny Liston. On February 18th 1964, Cassius Clay, not yet famous and not yet Muhammad Ali, was in training at the Fifth Street gym in Miami, a week before beating Liston to become a very unexpected World Champion. The Beatles had arrived in America on February 7th for their first visit to the States. Two days after landing they had been seen by 75 million people on the Ed Sullivan Show. Like Mozart, everyone wanted to meet them. In George Harrison’s words

Obviously we were having an effect, because all these people were clamouring to meet us – like Muhammad Ali, for instance. We were taken to meet him on that first trip. It was a big publicity thing. It was all part of being a Beatle, really; just getting lugged around and thrust into rooms full of press men taking pictures and asking questions. Muhammad Ali was quite cute, he had a fight coming up in a couple of days with Sonny Liston. There is a famous picture of him holding two of us under each arm.

Chris Smith, the American sports photographer was with Ali. He took this iconic photo of Ali knocking all four Beatles unconscious. 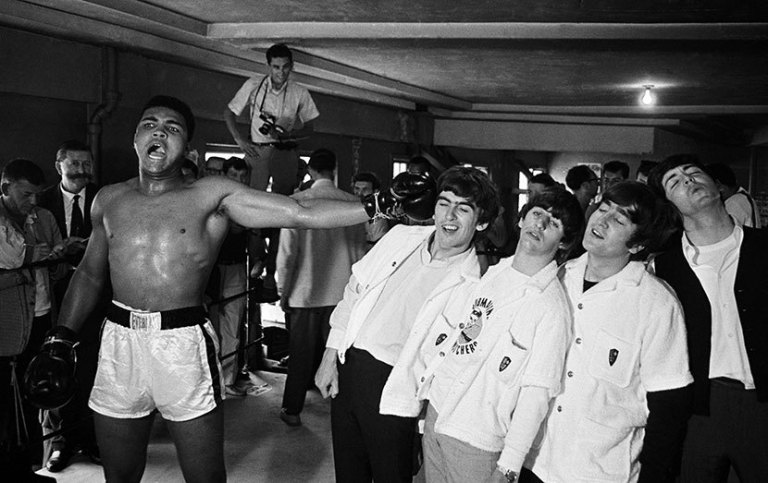 Robert Lipsyte the boxing writer gives a vivid and pungent account of their meeting. It contradicts George Harrison’s account slightly. According to Lipsyte, Ali hadn’t known who the Beatles were, but the photos bear out Lipsyte’s description of the spontaneous choreography and the instinctive rapport between them. The photos also show that Ali posed with the Beatles before and after getting changed into his trunks, so it was a longer session than Lipsyte recalls.

As I walked up the stairs to the gym there was a kind of hubbub behind me. There were these four little guys in terrycloth cabana suits who were being pushed up the stairs by two big security guards. As I found out later, it was a British rock group in America. They had been taken to Sonny Liston for a photo op. He had taken one look at them and said “I’m not posing with those sissies.” Desperately, they brought the group over to Cassius Clay—to at least get a shot with him. They’re being pushed up the stairs, I’m a little ahead of them. When we get to the top of the stairs, Clay’s not there. The leader of the group says, “Let’s get the fuck out of here. “ He turned around, but the cops pushed all five of us into a dressing room and locked the door. That’s how I became the fifth Beatle. [laughter]

They were cursing. They were angry. They were absolutely furious. I introduced myself. John said, “Hi, I’m Ringo.” Ringo said, “Hi, I’m George.” I asked how they thought the fight was going to go. “Oh, he’s going to kill the little wanker,” they said. Then they were cursing, stamping their feet, banging on the door. Suddenly the door bursts open and there is the most beautiful creature any of us had ever seen. Muhammad Ali. Cassius Clay. He glowed. And of course he was much larger than he seemed in photographs—because he was perfect. He leaned in, looked at them and said, “C’mon, let’s go make some money.”

And then—if I hadn’t known better I would have sworn it was choreographed—he turned and the Beatles followed him out to the ring. You can see this now on YouTube [see below]. They followed him out to the ring and they began capering around the room. They lined up. He tapped Ringo. They all went down like dominoes. It was a marvelous, antic set piece. And then it was over and they left. Cassius Clay works out. At the end he’s back in the dressing room being rubbed down after the workout. He and I had yet to meet. He beckoned me over because he had seen me in the dressing room, and he said, “So, who were those little sissies?” [laughter] And then the best thing in the world happened. He won and I became the boxing writer.

Library of America (with film footage of the meeting)

Ali had been 7/1 against in the fight with Liston, and Lipsyte had been sent down to cover it, because it wasn’t thought worth the regular writer’s time. As Ringo Starr said

I sparred with Cassius Clay, as he was called then – I taught him everything he knew. That was a thrill, of course, and I was putting my money on Liston, so I really knew what was happening!

I still don’t know who took this particular photo though. There’s a view of a close moment from the other side of the ring (Ringo has moved round) but you can’t see our photographer in it. 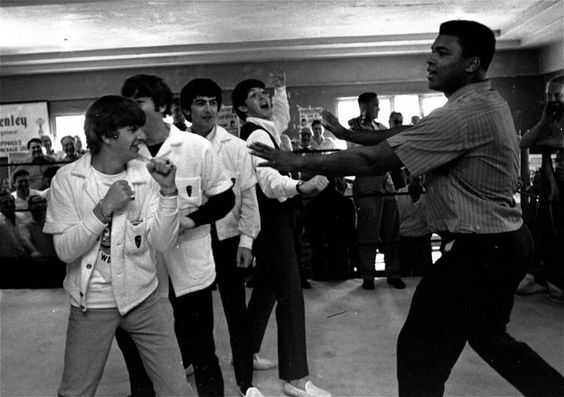 There’s an image of our photograph with the Grainger Archive (information courtesy of Austin Farahar at Chiswick Auctions) but no record of the photographer.

Perhaps the photographer will remain an enigma. There were a lot of cameras there. But I think they’ve taken a remarkable photograph, especially as a portrait of Muhammad Ali. Like the other images from the shoot, it captures the instant sympathy between great talents. And like them it shows how Ali’s sense of humour, how likeable he was, taking time at a crucial point in his training to throw himself into this Hard Day’s Night-style caper. But since it is the only photograph with a hint of real menace in the Beatles’ pantomime punch-up, it reverses the roles, and captures a conciliatory almost vulnerable aspect of his character. Ali was soon to be involved in the American Civil Rights Movement, and, perhaps unintentionally, this photo echoes more violent images from that time. An extraordinary piece of history to find in an old carrier bag.