Vasari, who was Michelangelo’s pupil, says that one Winter, Piero de’ Medici asked Michelangelo to built a giant snowman in his courtyard. As you’d imagine, the lucky few who saw it said it was his greatest work.

I thought of this yesterday when Zak told me this this happened on Friday at Sotheby’s. Banksy’s Girl with a Ballon sold for just over £1,000,000 (including premium) and the second the hammer went down, the frame buzzed and the picture shreds out of the bottom like a till-receipt. Is this Banksy’s greatest work?

According to the Evening Standard

The auction house said they were in discussions with the buyer about what the next steps would be.

Alex Branczik, Sotheby’s European Head of Contemporary Art, said: “You know what, I’ll be quite honest. We have not experienced this situation the past… where a painting spontaneously shredded, upon achieving a record for the artist. We are busily figuring out what this means in an auction context”

Banksy, whose true identity is unknown, shared a picture of it on Instagram and wrote: “Going, going, gone…”

An expert today said that the shredded artwork could now have doubled in value.

On this video released today, Banksy shows how he built in the self-destruct.

Some are saying it’s all a big stunt and Sotheby’s were in on it. I don’t think so. The instant it happens their staff go on super-calm red alert, and I don’t think you can fake that. Nor would they. Their reputation is worth more.

Where does it leave Banksy? This one is worth more for being destroyed. Will the next one be worth less for not being? Have we reached peak-Banksy? Was he trying to shock the art market or share a joke with them?

Who cares? Banksy is a street-magician. He makes you laugh. He makes you think. You’re in the bidder’s head for that nightmare ride, the hammer goes down, the joy of ownership, the disbelief, the horror. Then as if by magic it’s all ok. It’s even worth half as much again. You’re right, he says, modern art is all bosh.

In a more elegant world the picture would burst into flames, or blink out of existence, and the buyer would have nothing but the memory and their place in a cultural legend. That’s got to be worth a million.

This morning I looked up what else you could buy a bit more cheaply, if you didn’t want Girl with a Balloon or any other Banksy. This fantastic Constable of the ‘South Downs near Brighton’ sold for half a million at Christie’s in 2010, about the size of a postcard and what a bit of painting! It looks like the fields on the right looking towards Waterhall after the Devil’s Dyke turn. 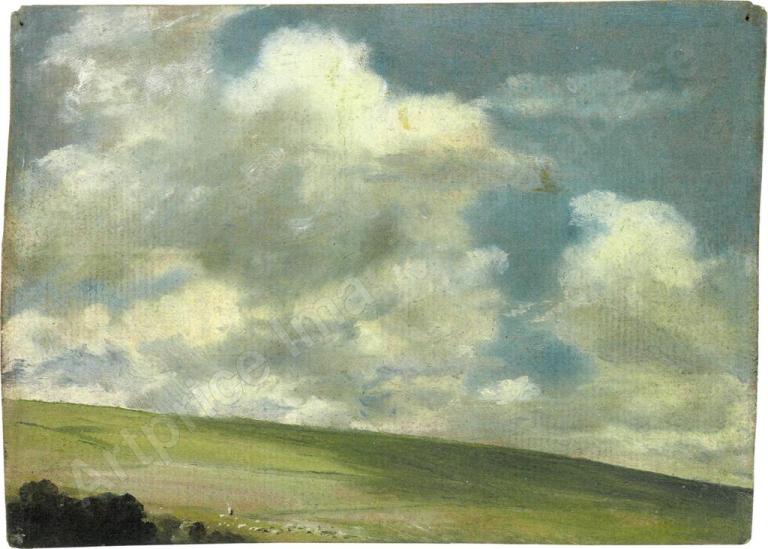