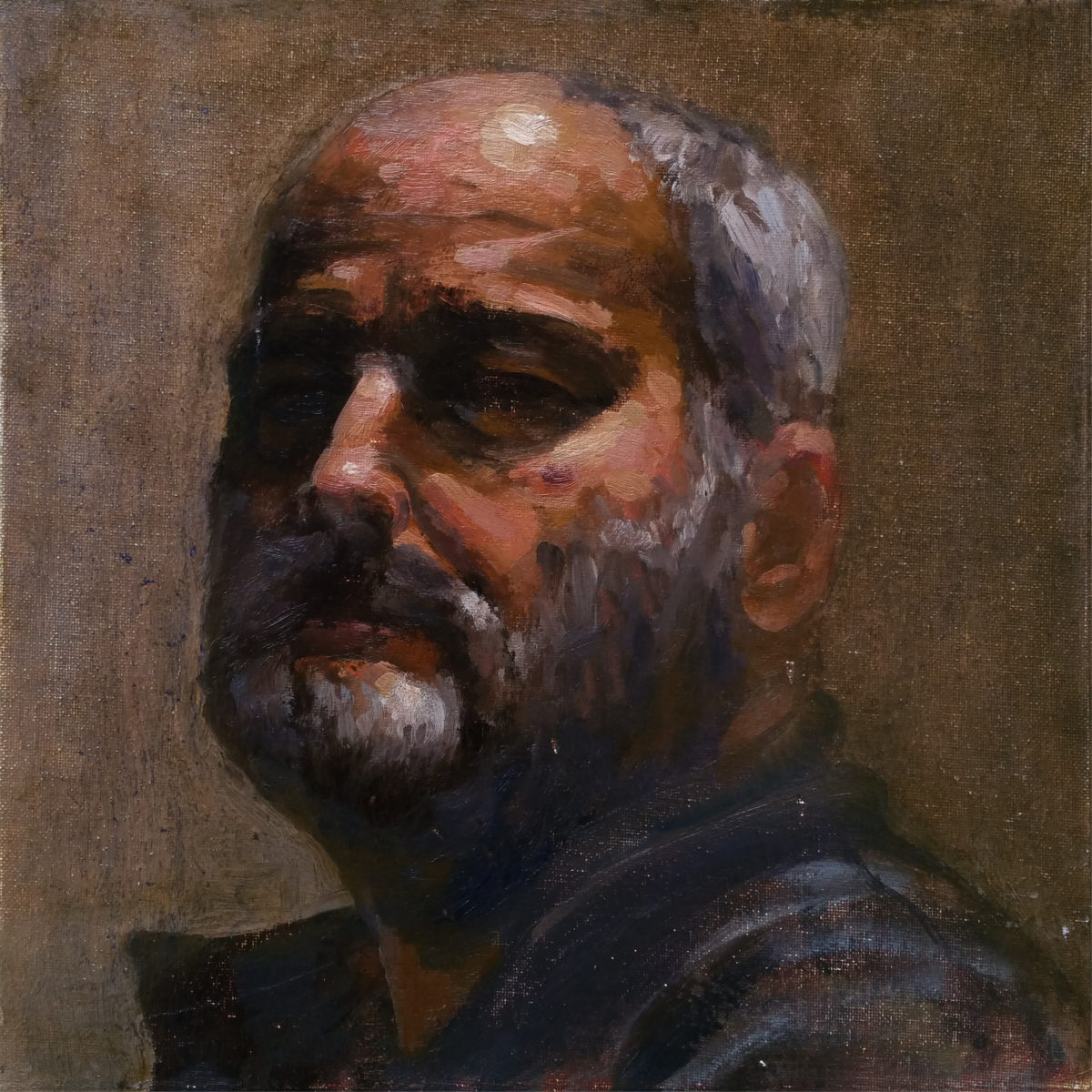 Lately I’ve been having an interesting conversation at work about self-portraits with my colleague Pierre Halé.

Pierre has been painting all his life, but only started self-portraits in the last few months. I was amazed when I saw the first of these little canvas panels, each about 12 x 10 inches. 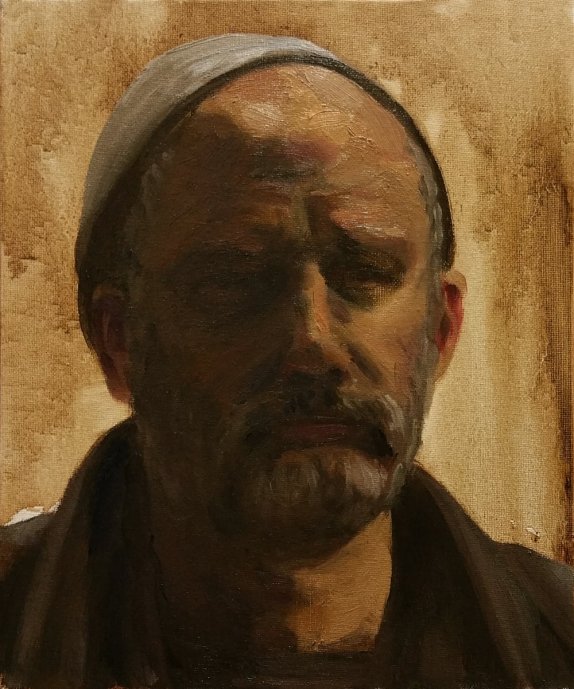 ‘Self-portrait as a fisherman’ looks like someone in the background of a Caravaggio. It is superbly observed. The artist works the oil paint lusciously, sculpting his head as a three-dimensional object. The sense that we’re seeing the momentary play of light over a solid form gives the impression that this is a snapshot of time. It creates a real sense of presence, the spark of life in the viewer’s synapses where you can imagine the expression changing.

Self-portraits are often described (frequently by me) as being a self-advertisement, or a form of artistic self-therapy. Rembrandt – 120 self-portraits and counting – is usually considered self-obsessed. But I’d never asked a living painter how fair these labels really are. Is it about character analysis? No, he said. ‘It’s purely about form. Until you mentioned the likeness (below) I hadn’t thought about it. 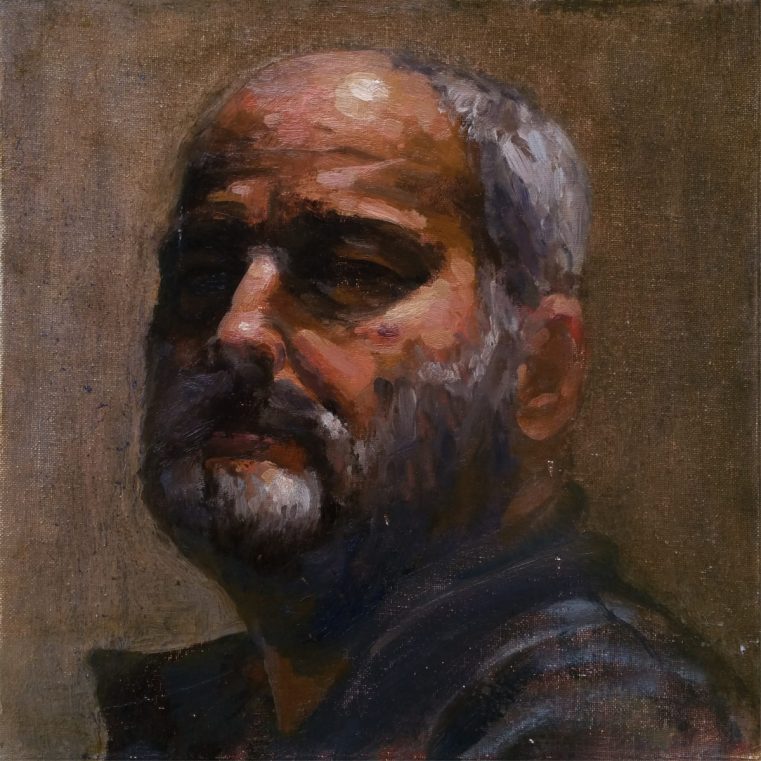 He doesn’t buy the painter-as-navel-gazer theory. You’ve got yourself as a model and a mirror. That’s all it is. A purely technical exercise, in which I have to say the results are quite spectacular. Setting aside mere likeness and physical plausibility, they are very elegantly done. In the first self-portrait here the curve of the hat and the collar are precisely, effortlessly drawn. Like the unturned collar in the second portrait, these shapes echo the pose of the sitter. They are a part of the whole package and contribute to the psychological punch, but they are also abstractly beautiful. The blue shoulder here makes you want to get your face in the painting. The lightness of touch. The curved line of the seam and the lightly brushed highlights with the canvas grain still showing, like a landscape sketch, or a phrase of music you keep whistling to yourself because it’s so completely satisfying.

But for the painter, still a purely technical exercise, a working-out of process. You can see where the line of the collar has been lowered, initially drawn higher up towards the ear. The final position creates another harmonious encircling curve. I was reminded of something Evelyn Waugh said about his novels. The interviewer asked him what he was trying to say in his books. Waugh told him he wasn’t trying to ‘say’ anything in them. He saw them as exercises in style. Detachment is a crucial part of artistic creation. Critics, being fans rather than players, are rarely detached. As Turner said of Ruskin, ‘He sees things in my pictures that I never intended.’

Pierre’s self-portraits were begun to resolve the technical aspects of portraiture, before painting a portrait of his wife. And as technical experiments they are absolutely stunning. In this latest example. he tries reducing his palette to four or five colours. 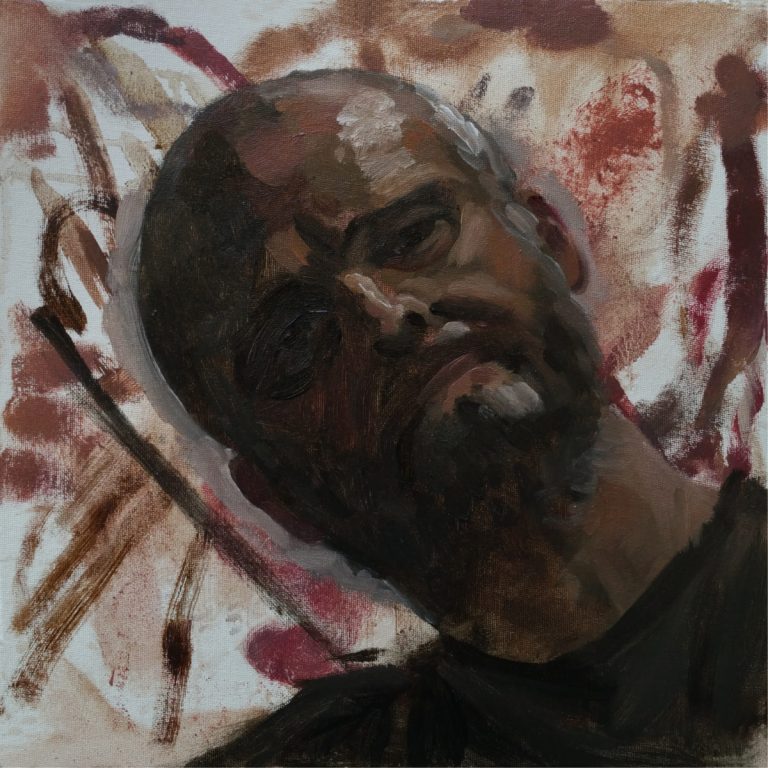 This hand-study could have been painted in the Seventeenth Century. It’s so rapid and free and well-drawn. There’s such an instinctive feel for what oil paint can do on canvas, a delight in its textures and possibility. Or perhaps no delight at all, merely the dispassionate resolution of technical questions. 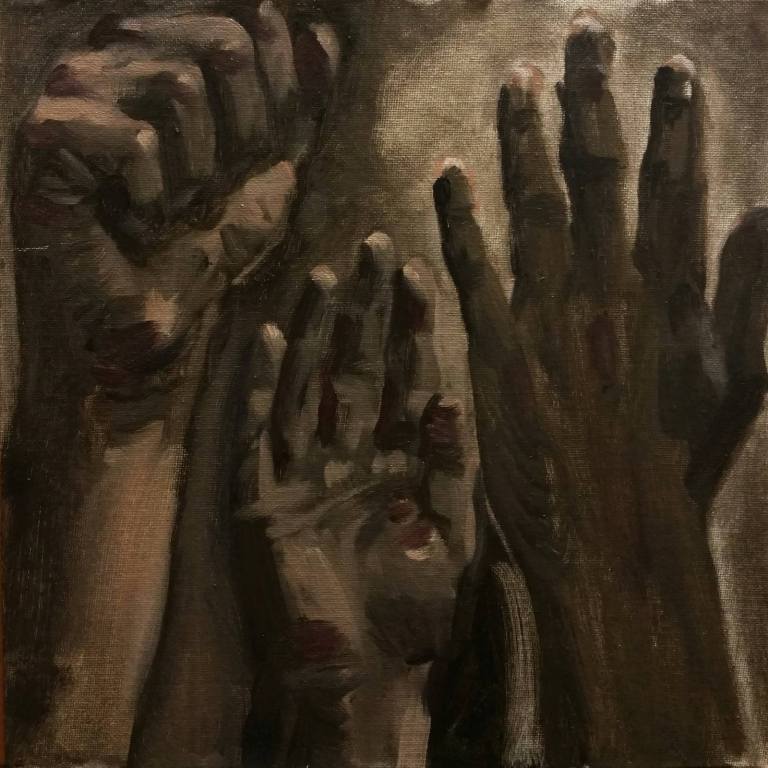 Either way, the result delights me. With sound technique the rest follows. The hands are not just anatomically convincing but lively, expressive, passionate even. These things are not easy to do, even for painters.

I asked Pierre who his favourite painter was, expecting him to say someone like Courbet or Manet, one of the great Nineteenth Century revolutionaries in paint. I was surprised when he said Julian Schnabel, the painter and film-maker. I didn’t know who Schnabel was – he’s interviewed here for Surface magazine in 2013 – so Pierre filled me in on his work, and the reputation of a man who, to many, makes Michelangelo seem modest and retiring. He described travelling many miles to visit a French chateau where giant paintings stretched down from a distant ceiling and, too huge for even for the vast walls, rolled around the viewers’ feet on the floor. Deep calls to deep. It was like the way that climbers talk about the greatest mountains. I tried to imagine myself in the presence of this annihilating artwork. Like the Painted Hall at Greenwich where if you don’t hang on you might fall up into it. Wow, I said.

All work and photographs on this page (c) Pierre Halé 2018

3 thoughts on “‘Yourself as a model, and a mirror.’ The self-portraits of Pierre Halé”