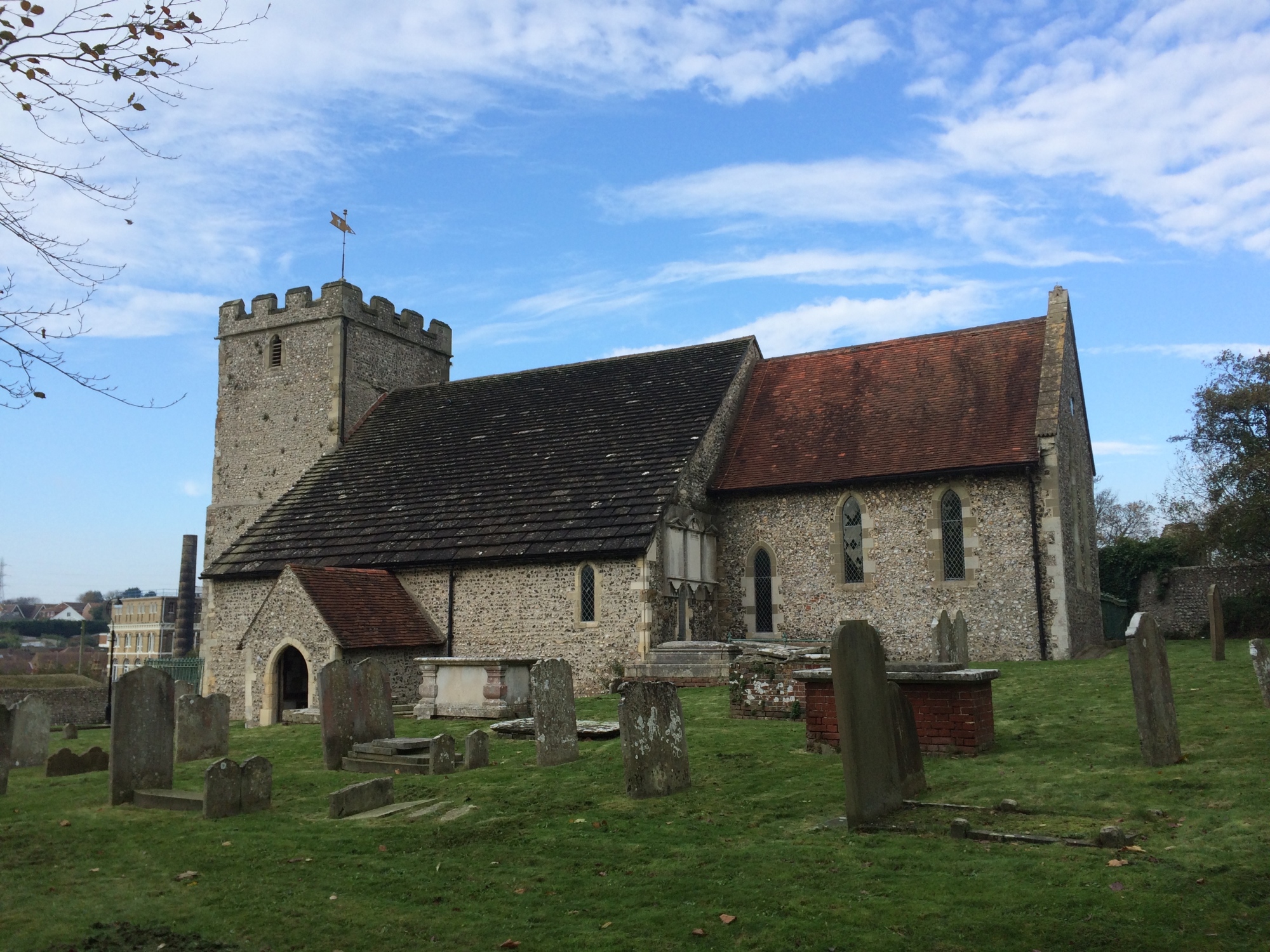 You’ll have heard of churches built with weeping chancels. This is where the nave and chancel are built at an angle to one another rather than on a single axis.

Traditionally, this angle is so that the church in plan imitates Christ’s head lolling on the Cross, with thanks to this image from Photographers’ Resource. 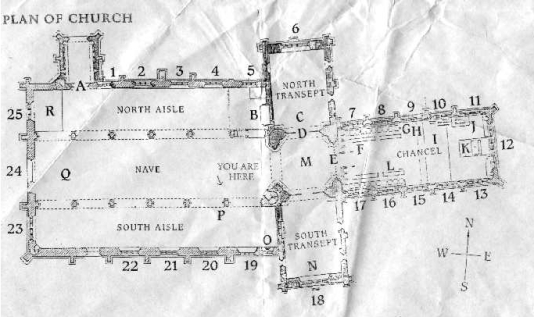 I had wondered about this, because in other churches the angle is less dramatic, and not so easily noticeable. At St Nicholas’s Portslade, by my round at work, the chancel is just slightly off-centre. 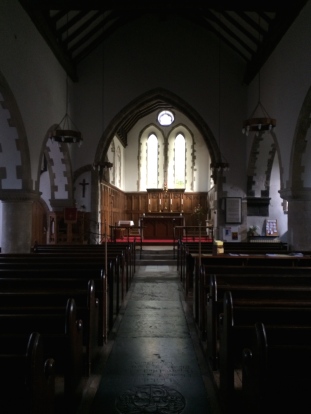 I had wondered with a pagan’s mind whether it was linked to the sunrise, and  googling as I had breakfast leaning on a tomb in the churchyard, I was delighted to read that it did. This brilliant article, still unfound,  took measurements of chapels built at Canterbury Cathedral, and knowing the dates on which they were consecrated, calculated that each had been aligned to the sunrise on Easter Sunday in the year they were begun.

The Nave and North Aisle of Holy Trinity were in building by the late Thirteenth Century. The Chancel was in use from 1420, and rebuilt later that century. So two distinct phases of building are aligned on two different sunrises. And at St Nicholas’s, the main church with its cavelike Norman pillars was built in 1170, and the Chancel was added 1250.

I loved this image of medieval masons sighting their work on the first sunrise of the fruitful year, like their stone-age forebears. Thus I was disappointed just now to read two superb articles by Dr Ian Hinton of the University of East Anglia. Do Chancels Weep? Church Archaeology  Vol 5&6 2004, pp42-54, [reference courtesy of Dr Ian Hinton] and Church Alignment and Patronal Saints Days (Antiquaries Journal 2006) are breathtakingly through scholarship. Dr Hinton surveyed over a thousand churches throughout England, and examined whether chancels wept more to the left or the right, and whether they were aligned to sunrise on their patron saint’s day, or to Easter, and if they just happened to be slightly crooked because they were built on a slope. Where possible Dr Hinton even explores the weather, the geography and the likely conditions for building and materials in each year, but he concludes that chancels weep for none of the above reasons. We still don’t know why, though he notes that in each instance the realignment appears to be a conscious decision, and in many cases the later building is aligned more closely than the original with true East.

This is fact, implacable, and inscrutable. But it leaves open a lepers’ squint for my romanticism. Does that suggest the earlier phase is sighted on the sunrise then? As it’s lunchtime I’ll leave it there, but I hope so. Our forebears lived outside, and the Seasons were immediate to them. The first sun of Spring was as potent to the early medieval builders as it was to their ancestors, and for me these East windows are a numinous link with the sun-aligned stones and barrows of three thousand years ago.

Happy Easter one and all.

In February I received an email from Dr Ian Hinton: “The research [in the 2004 and 2006 articles mentioned above] was extended for my PhD and was published in 2012 as “The Alignment and Location of Mediaeval Rural Churches as BAR British Series 560. The number of churches surveyed went up from some 900 to almost 2100. The results are proportionally similar and the conclusions the same. I have extracted the relevant part of Chapter 4 on chancels [Misaligned chancels as religious symbolism].”

I am hugely grateful to Dr Hinton for sharing this mammoth piece of scholarship with me and reproduce his chapter conclusion below:

In answer to the two questions posed in the title, firstly, do chancels weep? Yes, half of all chancels that are aligned differently from their nave re aligned to the left of the nave and therefore do weep, but this is what would be expected of a sample of this size if the distribution were just random.

The answer to the second question, does the misalignment actually mean anything?, is obviously yes, in the majority of cases. Since churches are almost equally split between left and right misalignments, it is obvious that there was no intention to represent an image of the Crucifixion, but churches with misaligned chancels fall into two groups.

Firstly, those that had their chancels rebuilt, of wh over 80% were realigned closer to east probably as part of this process. The improvement of alignment during rebuilding, even though it is usually only by a few degrees, is further emphasised by the fact that the later the rebuilding of the chancel, the more likely there is to be an improvement in alignment towards east.

Secondly, those that were misaligned when they were first built. At first sight these appear to present an almost random variation of 54% closer to east and 46% further from east, but which increases to 62:38 when naves aligned very close to east are excluded. This appears to reduce the possibility of random setting out errors an ows that there was intent even here – almost two thirds of these churches have a chancel aligned closer to east.

This is supported by the fact that in the more extreme alignment groups, as the nave is aligned further from east, higher proportions of chancels align more closely with east, even if apparently built at the same time as the nave. This poses the unanswerable question of ‘why wasn’t the church originally built straight?’.

Overall, however, these results strongly suggest that alignment was not an accident of setting out, and was involved with alignment towards east.

Any realignment where chancels are more modern than the naves tends to be towards True East, rather than magnetic east – demonstrating that the compass was not used for rebuilding before the late sixteenth century when magnetic declination was first measured. It may have been used during eighteenth century rebuilding and appropriate adjustments made.

Finally, neither sunrise on Patronal Saint’s day, nor sites, nor site restriction appear to have been factors in misalignment or realignment. Analysis by Patronal Saints day sunrise showed half the chancels closer to and half further from the relevant sunrise position. Similarly, half of chancels appear to align closer to the axis of the slope of the churchyard and half further away. In the first two cases, half of the chancels are closer and half further away. Churches in more restricted churchyards are no more likely to be misali ose in large yards.

In general, it seems reasonable to conclude that churches were originally vaguely aligned eastwards, but for some reason, a more accurate orientation became increasingly important over time, which was realised when the opportunity arose through rebuilding. Did the intention change from a sunrise alignment to one aligned more generally towards east?, or did developing technology allow a more accurate realisation of an original intention to align eastwards?

One thought on “Weeping Chancels and the Easter Sunrise”