The other month, a friend asked me about this superb portrait. Who did I think it was by?

I didn’t know. It’s a beautiful painting, showing a man in around 1730. The sitter’s indoor clothes suggest he was either an artist or a writer – the bohemians who invented the open-neck shirt – or that his portrait was painted to be seen only by his friends and family. It’s a very characterful image, with his hint of a smile. One half of a conversation, or what was called ‘a speaking likeness.’

The handling is so distinct. The freely-drawn green cap reminded me of the cap in my Dahl self-portrait – absolutely beautiful – but I’d never seen velvet like the sitter’s coat. The reflections are brushed and dotted on, flashing above the surface of the coat like sunlight on water. The coarse herringbone weave canvas is such a feature of the painting – you can see it in this photograph. 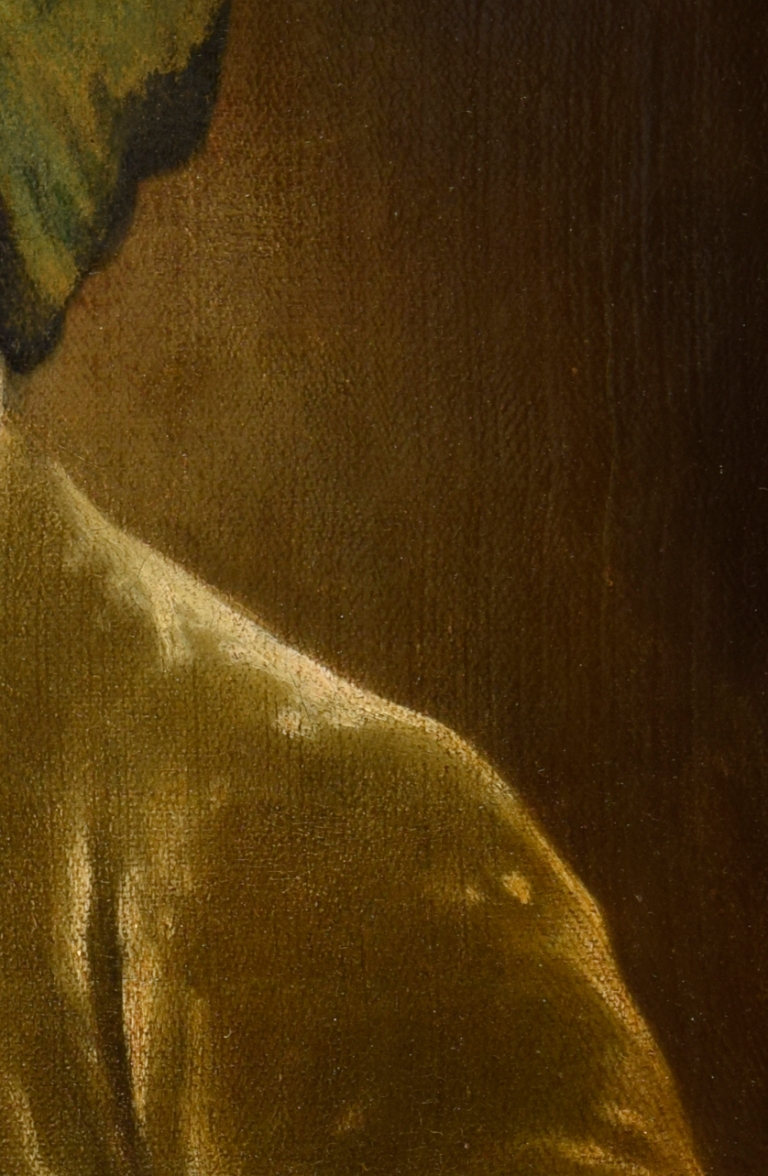 My friend pointed out the way the artist uses the canvas as a feature of the painting. The heavy weave holds the paint thickly in heavily worked areas like the face and the highlights. And in areas like the background and the body of the coat, the way the light moves over visible weave gives the painting a real textural richness. His memory for techniques always amazes me. Like an antiquary he recognises hundreds of artists across the centuries. When he said that he had seen this artist before, and this distinctive herringbone weave canvas, I felt that we were already nine tenths of the way there, even without a name.

The painting reminded me of a photo in Waterhouse’s British 18th Century Painters, an unknown man signed and dated by Robert Taylor in 1737.

Leads like this can be counter-productive. That instinctive first hunch may not be right, but it is hard to dislodge and can lead you up many blind-alleys. There’s a similarity in the characterisation – that good-humoured half-smile again – and in the curl of the shirt-front. But other painters might do that too, and the photo didn’t give any clear hint about technique or canvas.

Waterhouse’s entry on Taylor is brief, and mysterious. Nothing – nothing at all – is known about his life. Dated worked exist from 1737 to 1755. That ‘s all the biography we have for him. George Vertue’s Notebooks are the best source on his fellow early Georgian painters. He doesn’t mention Taylor at all. Waterhouse wonders if this was because Taylor was a Jacobite, a supporter of the exiled Stuarts, while Vertue was a loyal Hanoverian.

Taylor was worth exploring, so I looked him up on the NPG catalogue. One example jumped out, the portrait of Robert Gwynne, engraved by John Faber in 1747. 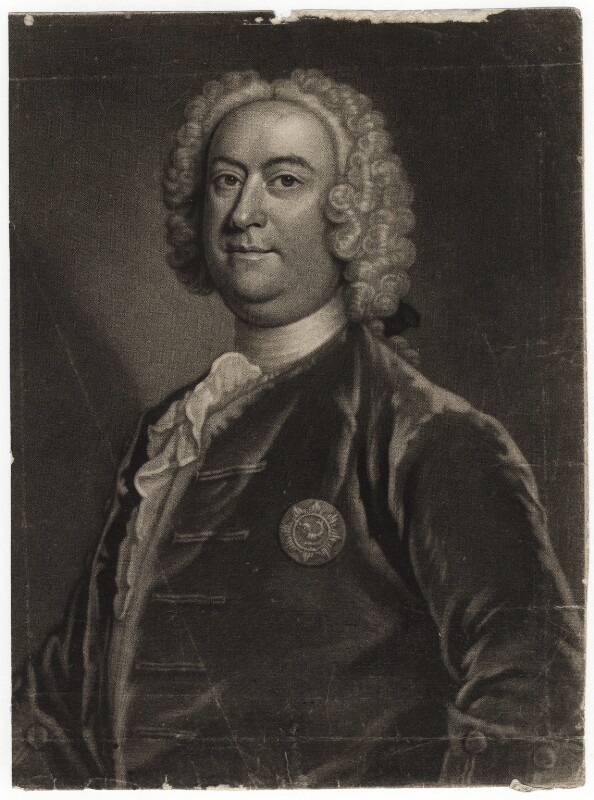 This was encouraging. It’s a print of Taylor’s portrait, not the portrait itself, but the treatment of the cravat is like our man’s shirtfront, the highlights around the right shoulder feel similar to our man’s coat and there is a similar, genial expression. The sitter is also set quite high up in the canvas, which was another distinctive feature of our portrait.

I turned to the ArtUk site, showing paintings in British public collections. What would they have? Intriguing things, was the answer. 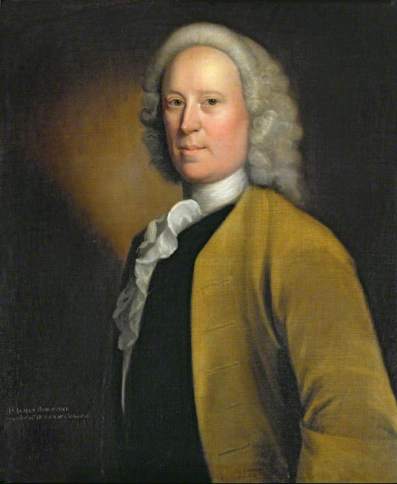 Straightforwardly, this portrait of James Heseltine shows the same characterisation as our portrait. It’s slightly more wooden, perhaps because this is a more formal portrait, but the same stylistic hints are there, the same curls and highlit edges to the linen, the same high-placement in the canvas. It felt like we were getting there.

There was also this portrait of Mansel Langdon (d.1759) in the National Library of Wales. 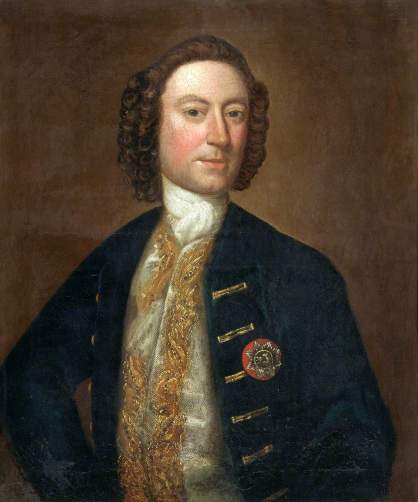 It’s painted on a coarse canvas – you can see the texture in the sitter’s waistcoat – though it’s a diagonal weave rather than herringbone. Again the sitter is high up in the canvas, with a quizzical engaging characterisation. He is wearing the star and dolphin badge of the Sea Sergeants, a club of twenty-four Pembrokeshire gentlemen, who met to drink the health of the King Over The Water. Robert Gwynne is wearing the same in his engraved portrait. Here was Taylor’s Jacobite connection.

Taylor may have painted portraits of the entire club, or of its officers. The National Library of Wales has two further versions of Robert Gwynne’s portrait. Neither looks like it was the original engraved by Faber. They look like studio versions, or copies. Perhaps duplicate sets were made, perhaps so the sitters could have a set each. 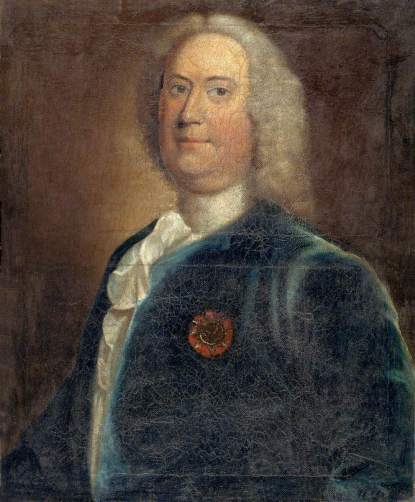 These two Sea Sergeants were donated by Baroness de Rutzen in 1946, who was a descendant of the Gwynne family. The further portrait of Gwynne was donated by Mrs Pryse Pissarro in 2011.

The Sea Sergeants were social rather than militant Jacobites. They advertised their dinners in the local paper and continued to meet twenty years after the end of the Jacobite Rebellion in 1746. Taylor’s world was coming into focus, but I was still missing a herringbone canvas.

So I went to the Heinz Archive at the NPG. The Heinz hold images of works in private collections as well as museums and auction, which aren’t for publication. You’ll have to take my word for it, then, that Taylor’s 1743 portrait of William 5th Lord Digby at Sherborne Castle, Dorset is painted on just the same herringbone canvas as the gentleman in green velvet. It was the last piece in the puzzle.

The portraits of the Digby family are sober, formal likenesses, different to the lively air of our sitter. His identity remains a mystery, but the sense of rapport in the sitting suggests that he was a friend of the painter, or someone he enjoyed painting. It is always possible, of course, that it is a self-portrait.

It’s always satusfying to add to the oeuvre of a painter like Taylor, who deserves to be better known. The genial air of his portraits suggest a likeable personality, just as his patronage speaks as well of his character. Lord Digby was a stern supporter of the Church of England and a great philanthropist. He funded the rebuilding of Warwick after the Great Fire of 1694, and would visit the Fleet Prison to pay the debts of inmates. Perhaps it was less a case that Vertue chose not to mention Taylor, and more that Taylor’s work in Wales and the West Country, where he may well have lived, meant their paths did not cross. The Robert Taylor, painter and glazier, who made his will at Portsea, Hampshire in 1797 may have been a relative.