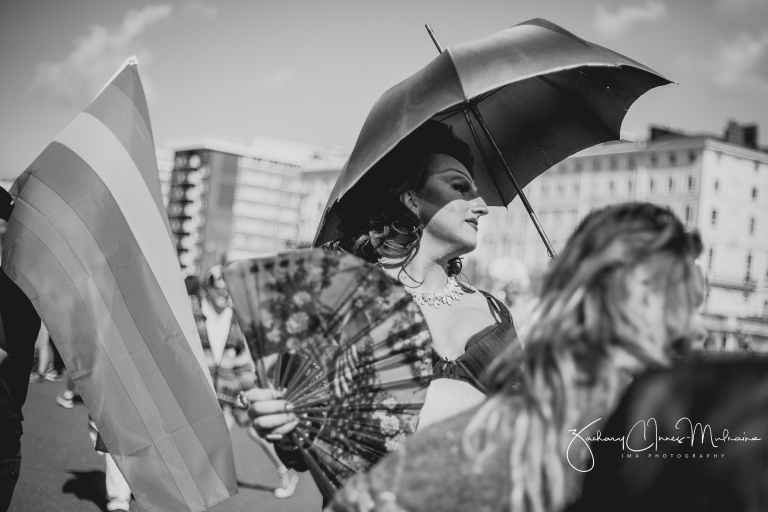 Three Letters + is a collection of photographs and text panels. Paired together they tell a single story, a gay man’s wild, formative years from 18 to 40 in ‘the Bermuda Triangle’, as the artist calls the journey from his native Portsmouth to Brighton via London at the beginning of the millennium.

Despite the title, the impact of the artist’s diagnosis as HIV+ early in this time is more felt than heard, and only revealed in the final panel. The exhibition, as the artist says in the catalogue essay , ‘isn’t about that, it’s about [HIV] being surrounded by everything else.’ This feels like the quality he prizes in the characters from his past, that bulletproof combination of stiff-upper-lip, and merciless self-confidence known as ‘fierceness.’ Shade chic captures this perfectly, a drag queen peering over the throng like a Victorian aristocrat at Derby Day. As John Le Carré has said, a man like that could be having a Force 12 nervous breakdown next to you at the bus-stop and you’d never know. 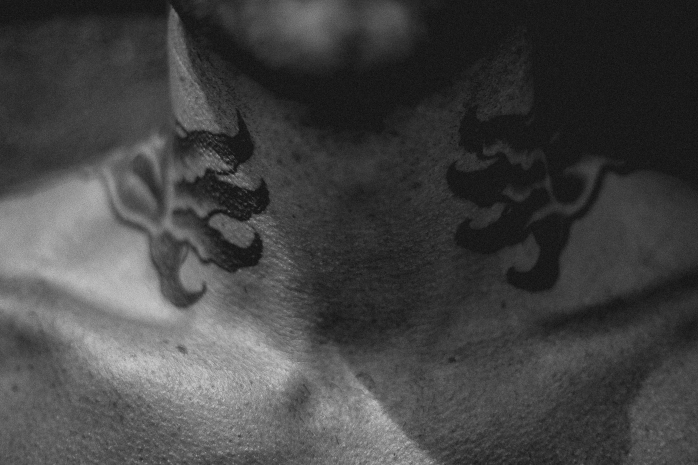 In Dog Day Confessionals, even at his lowest ebb, the artist gives himself just such a pep-talk:

Toast in the dark is never a good sign. I don’t mean a single malt with a fittie, I mean a piece of toast. A black cloud was descending and this time I couldn’t spray it pink…  [So] stop ya fucking bitchfit and get on with it, so I belled up dolly gurl and off we skipped to Soho.

The artist’s voice, cocky, hip-rolling language is often poetic, and sometimes grandiosely Mandarin. The set-pieces of a lost gay London are transformed into scenes of surreal theatre. Cruising become a pagan rite in Woodland Preacher, and a much-loved West End meat-rack becomes a surreal tableau in Bait-lines.

Walking into Squeakers was always a scene. The mamas, the speaker-bells, the man-manors, the she-queens and the faints… all very different in manner, but bending and floating like a terrible ballet, pecking at the bar looking for seeds. I both loathe and love this place. …But it was the pantry downstairs where I always got my cake. That was the syringe for my veins, always getting off, always filth. “It’s the crack of this world,” said Doreen, “and we’re their fucking kingpins.” And away we went into the glorious rainbow haze. ”Good day you gruesome scene!” I lorded, “for when we return we shall be fed and ready to two-step.”

Men still spoke Polari when Zak was first on the gay scene, and his language sashays to the beat.

The photograph paired with Bait Lines is a view of a corridor at Ightham Mote, the National Trust House in Kent. This illustrates that Three Letters + is a told by two voices, the artist’s younger and older selves. A Jacobean gallery reminded him of a sauna – like a sauna in Heaven – and inspired the writing. But the photograph has a power of its own, and this glimmering corridor, richly-presenced and crackling with potential reveals the process of the mature artist.

The greatest piece in the exhibition, Heritage Found 2017 a ruined house above the harbour at Portsoy in Aberdeenshire, is a piece of brooding grandeur.

Zak had visited Portsoy, a fishing village on the Moray Firth, for the first time in July. He had discovered that it was where his family was originally from, and where his Grandfather’s and great-Grandfather’s names are carved on the war memorial. Zak went and sat on a hill above the harbour, stunned by this sudden connection with a place he had never known existed, and the tragedy behind his great-Grandmother having to leave it. He took Heritage Found as he tried to process this, and the photo is like a Minor Key symphony of sea, sky, and memory.

The raw, unpredictable power of the past is a theme throughout the exhibition. The artist rejects nostalgia as a motive in his work – he sees the process as one of learning – but there are images that are golden-tinged to someone from my generation.

Queue at the Pulpit shows a band rehearsing behind the Astoria, in streets since demolished to build Crossrail, and BG (Before Grindr) remembers the days before internet pick-up sites.

In Waterloo Walker a clubber from the night before and a woman on her way to work trade early morning insults. 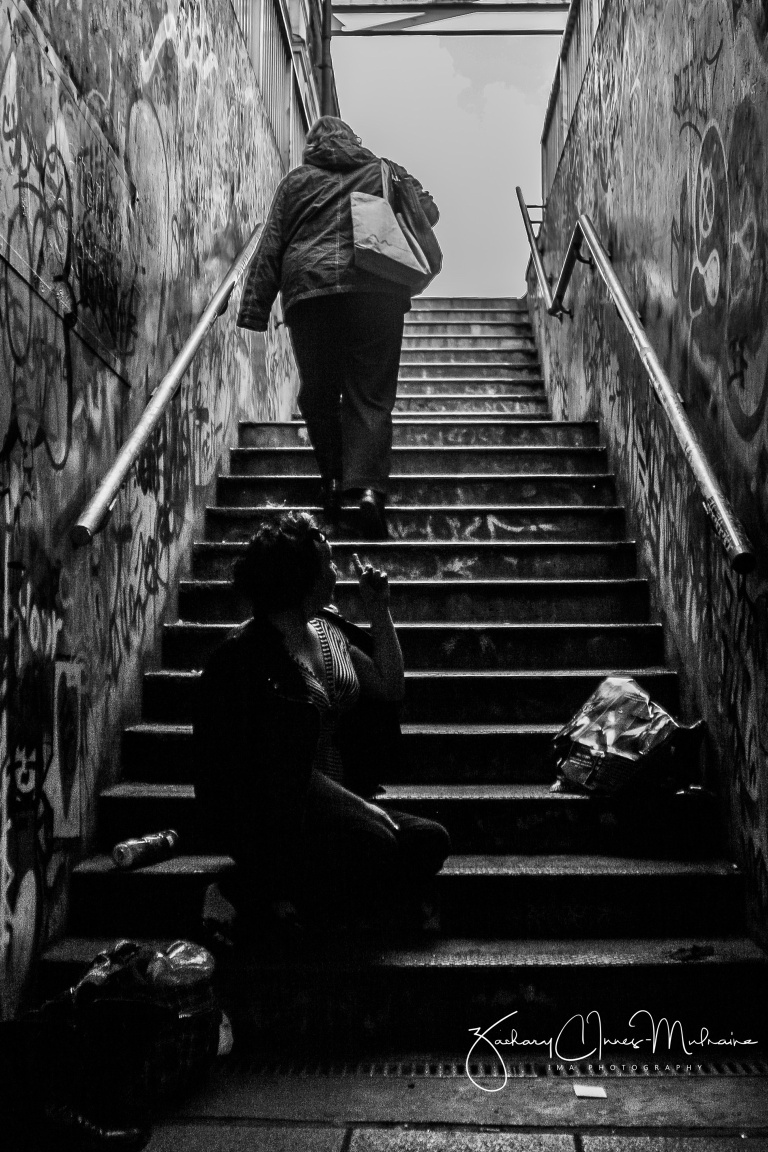 This cheerful ‘fuck you!’ to adversity is the keynote of Three Letters +.

Crack Light, a view through an alleyway to the lighthouse at Whitby, is a beautiful study of an illusionist painted window. But it is also a powerful image for the artist. You might think you’re bricked in, he says, but there’s always a lighthouse out there somewhere. 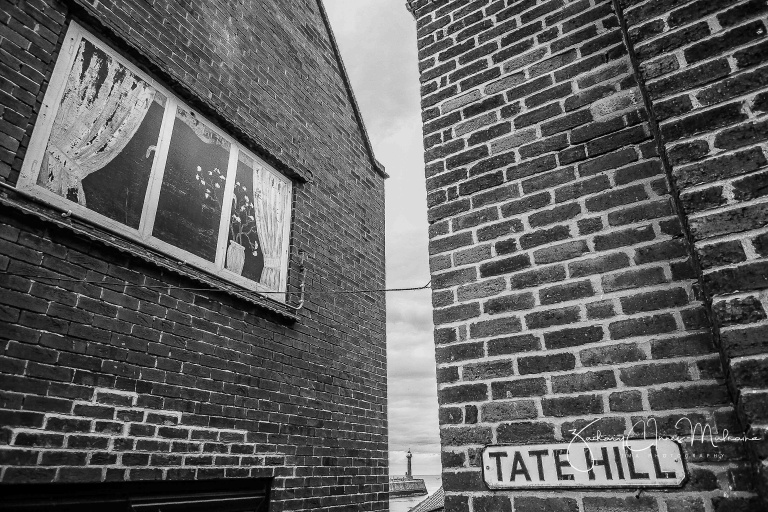 From the beginning of his story, the artist is sustained by his personal faith in Madonna. MLVC Bourgeois Rebel is one of the more remarkable pieces in the show, a photo of a collage the artist has made from press-cuttings he kept as a teenager.

The journey ends on a note of hope, with the quick-fire larrikin picturing himself as a one half of a time-worn couple, like the two old ladies in ‘Semper Amati’ 2016, a view of the great hall at Ightham and a masterpiece of chiaroscuro.

A pdf of the print catalogue is available for £5 at https://www.imaphotography.co.uk/buy-the-program