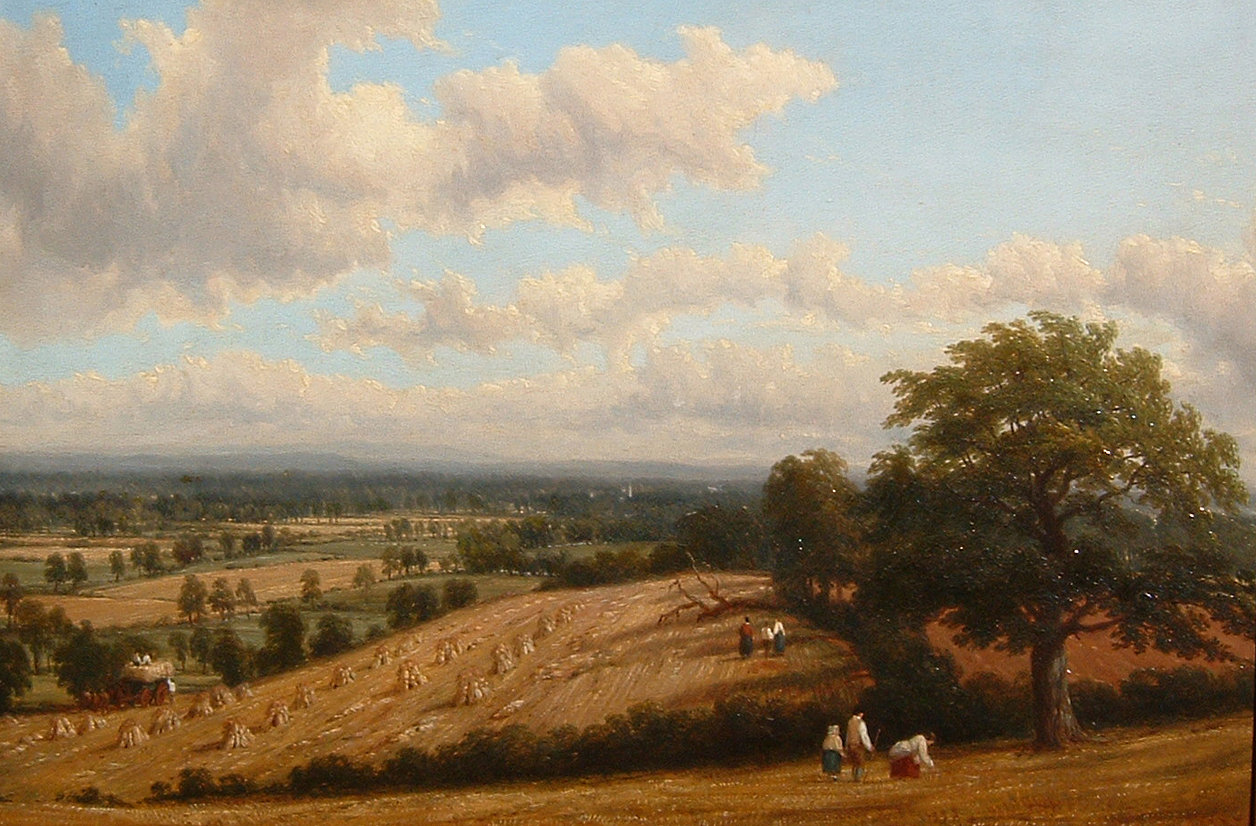 Last week my father, Robert Mulraine, went live with his new website, thomasbakerofleamington.com, an online catalogue raisonné of landscapes by Thomas Baker (1809 – 1864). It’s an exciting project for two reasons. Baker is a painter who deserves to be more widely known. And for his entire career, from 1829 until his death in 1864, he kept a record of each painting, including a thumbnail sketch and a note of support, dimension and medium. These diaries, what Baker called his ‘Memoranda’, were bequeathed by his son Thomas Smith Baker to the archives at Birmingham Museums in 1908.

Since then they have been known about, but little used, by the auctioneers, dealers and collectors who appreciate Baker’s work. Yet each painting, almost invariably, has a number painted on the back, usually on the stretcher, which relates to an entry in Baker’s Memoranda. There are no other artists that I know of, apart from Claude, who present their entire work in this way, and it is tremendous resource. Dad has already had auctioneers contact him to identify pictures, and establish provenance; Baker also lists exhibitions, buyers and prices.

Baker’s life as it is revealed in the Memoranda must be the model for so many landscape painters in the mid-Nineteenth Century, and may hold true for the previous fifty years. Baker travelled the picturesque trail through the Peak District, the Lakes, Wales and the Borders, and exhibited and sold his work everywhere from London to Edinburgh and Dublin.

Baker studied in Birmingham under Joseph Vincent Barber, where his fellow pupil included David Cox and Thomas Creswick, two friends with whom he established the Birmingham Fine Arts Society. His training included copying Old Masters, but perhaps under Barber’s influence, he left Birmingham and went to live in Leamington Spa, where he immersed himself in the South Warwickshire countryside, which he records in over seven hundred landscapes. He paints the country I grew up in with the same poetic realism, the same love, as Constable paints Suffolk. 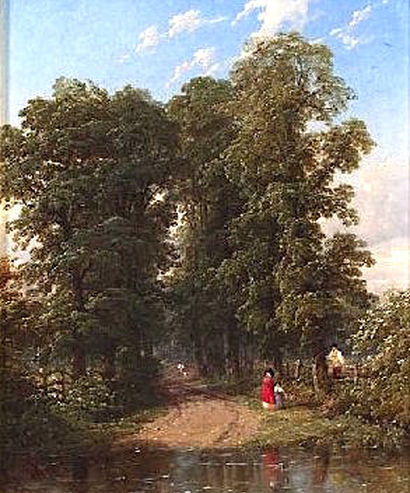 In A narrow lane at Stoneleigh Baker finds an echo of a Dutch painting in the composition, but the atmosphere is wholly Warwickshire, and you can hear the watery russle of the elms between the couple’s voices. The picture typifies the gentle atmospherics of his work, sharp light and calm skies, and an instinctive feel for the physicality and presence of trees and water.

Baker’s diary entry for this painting shows the business end of a painter’s life, and a picture’s travels between easel and sale. 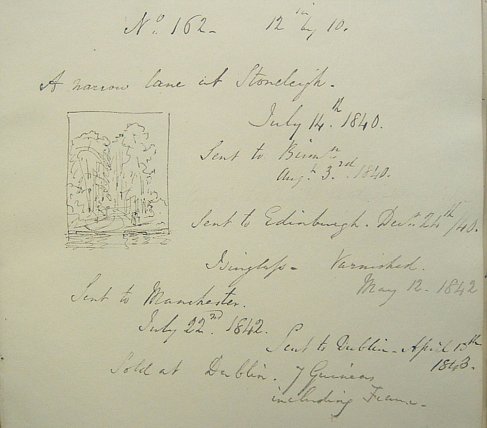 Painted in July 1840, exhibited at Birmingham in August, then Edinburgh at Christmas. In May 1842 it was varnished with isinglass – made from the swim-bladders of fish – and exhibited at Manchester in July, and Dublin in April 1843, where it sold for 7 guineas including the frame. Extraordinary detail, and this is for every one of 800 paintings.

This project has been a labour of love. I remember Dad getting into Baker twenty years ago, and I asked what first excited him about his work. He said it had been an exhibition at Leamington Art Gallery in 1997: ‘I was absolutely smitten by the subject, and the general image of the countryside.’ It was a world that had still existed when he was working on a farm in the late 50s and early 60s.

Dad remembers cutting oats and stacking the sheaves, eight to a stook, just like the harvesters in Baker’s painting. The stooks would be collected to put into the rick, and the farmer would hide a bottle of cider in one of them as a treat for the reapers. ‘Substitute the horse and cart for a tractor and it could have been me on the farm.’

Baker’s diary gives the title of Scene in Warwickshire, harvest-time, but not the location which is rare. To us, it looks very like the Welcombe Hills looking towards Hampton Lucy, one of my favourite views. That’s to say, I suggested it to Dad and he thought it was possible. Baker is a master of distant landscape, which brings out the precision of his draughtsmanship. Dad says that Baker’s touch is unmistakable to him, the trees, and the way he paints the grass and the earth in the foreground.

Only a tenth of the paintings in Baker’s diaries are recorded today. In some cases we know both the finished painting and the preparatory sketch. A landscape painted in 1837 ‘from a sketch made last Summer near the Village of Honingham’ (diary 108) matches this beautiful signed watercolour dated 1836. 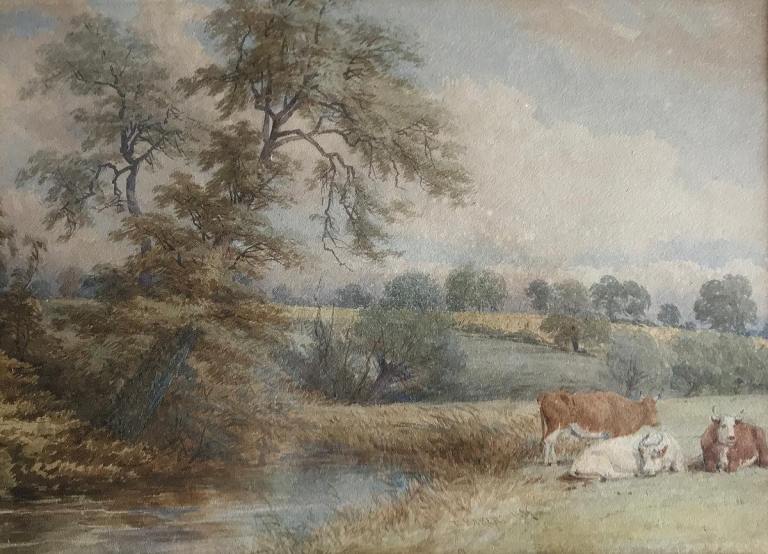 There’s a precision and the feel for landscape remind me of the sketches that Van Dyck made in England in the 1630s. The palette is very similar – the few colours that a painter takes with them to sketch outdoors. And as ever it is as much a portrait of the trees.

The website has been a labour of love for Dad, and lately for my husband who has been designing it with him. Dad’s ambition for it began twenty years ago, when the late Tessa Sidey, Fine Art Curator at Birmingham Museums, encouraged him to look up Baker’s manuscript diaries in the archive, and allowed him to take his own photographs of them. He realised what a unique resource this was, and suggested that it should be recorded. When Birmingham Museums began photographing the diaries, they very kindly agreed that Dad could compile them as a catalogue. It is an ongoing resource, because he hopes that more of Baker’s work will come to light as a result of it. It’s a very exciting thought, because there are some fantastic-sounding paintings as-yet undiscovered. I’d love to see the views of Goodrich Castle.

If you do have a painting by Baker, Dad would love to hear from you through the site. In twenty years he has only come across one painting that wasn’t listed in the diaries, one of my favourites, the little oil on panel of a donkey in Watford Art Gallery, signed and dated 1863. 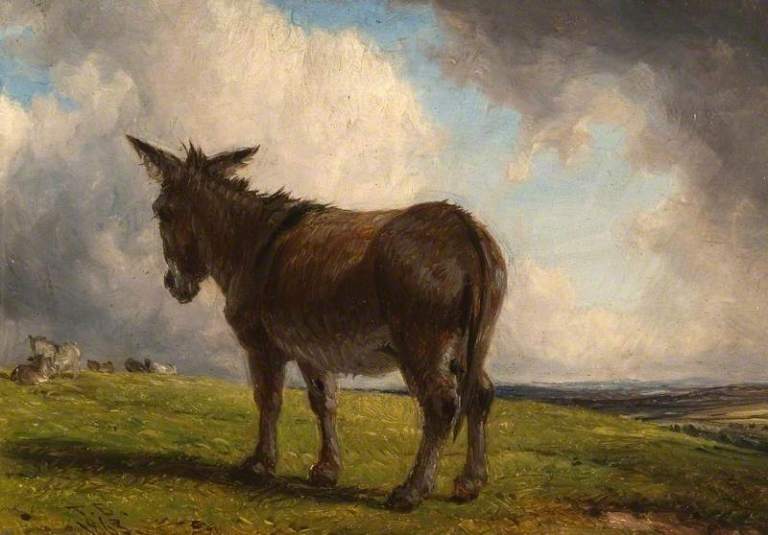 You feel a particular bond with an artist you respond to as Dad does to Baker. I asked whether he felt he had a duty to him, to do what he can to raise the profile of Baker’s work, and reassemble his output. To rediscover and reappreciate him. Definitely, he said.