Rosebery’s at Knight’s Hill has this drawing coming up next week, July 22nd lot 624. 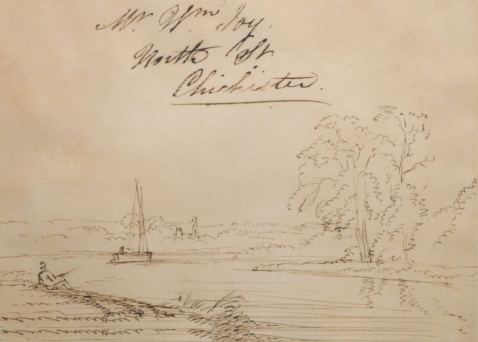 It’s signed by William Joy (1803 – in or after 1859) and it measures 13 x 18 cm. Rosebery’s say it must’ve come from a Visitor’s Book somewhere Joy was staying. When he left, he signed his name and address, and filled the rest of the page with this atmospheric little sketch, where a fisherman watches a boat round a river bend by an old gabled house.

William and his younger brother John Cantiloe Joy (1806 – 1859) painted marine pictures together, known to contemporaries as The Brothers Joy. They had been prodigies growing up in Great Yarmouth. Their father was the Guard on the Ipswich to Yarmouth Mail Coach. Their mother’s maiden name was Cantiloe, which survived by giving it to her second son as a Christian name, a very good idea. Early drawings of their school were good enough to be engraved, and the life-saving inventor Captain GW Manby gave the brothers a room overlooking the harbour to paint ships from. Their joint painting of King George IV passing Great Ormesby, Yarmouth, on his return from Edinburgh painted in 1822 is in the V&A. Their work was popular with sailors who appreciated artists who ‘greatly excelled in depicting water in motion, they put their vessels well upon it, and were accurate in depiction of sails and rigging.’ (CJ Palmer The Perlustration of Great Yarmouth 1875 quoted in Lindsey Macfarlane’s DNB entry, which is where all my information comes from.)

The Earl of Abergavenny became a patron, and the brothers could move to London, where they studied the Old Masters. Later in life they moved to Chichester, where John Cantiloe died in 1859. William is recorded at his bedside, and is believed to have died himself shortly afterwards. The Chichester address dates the drawing at Rosebery’s to this period, and I’m sure the rate books in the West Sussex Archive could pin down the exact time the brothers lived there.

The location of the house William Joy was visiting is more of a mystery. The landscape looks like a view of the Norfolk Broads, so it could be a visit to one of his old friends and patrons near Great Yarmouth. Which came first tho, the drawing or the signature? It looks as though he signed his name with the pen in the hall, formally, like any other guest, then changed his mind – ‘Please, Mr Joy….’ – and got out his drawing pen. The result is a beautifully spare line drawing with more than a hint of Rembrandt. Talented painters amaze you by the way they translate their observation into visual cues that resolve in your synapses. It’s a clear, still day and the boat’s sail is down. That’s straightforward. The quality, what makes Joy a good artist, is the way he makes us aware that the fisherman is looking across to the boat, and how fast the boat is moving  on the current. A good picture captures a moment in time, as well as place, like the flickery moving photos on the iPhone.

One thought on “Covetable object of the week: a drawing by William Joy, visiting.”