Literally, so, from the sun beating in at my window here. The rain first thing has passed, along with the incredible thunderstorm last night and now it really feels like summer. 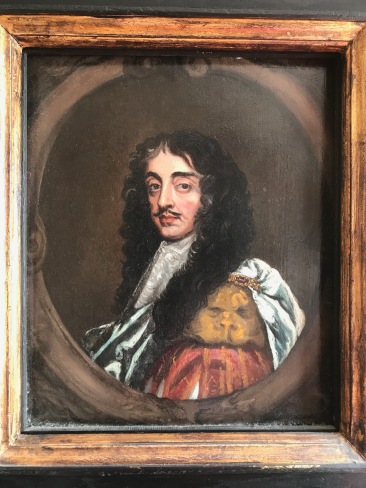 Today is one of the happiest days in my calendar, Restoration Day, the 357th anniversary of the return of King Charles II to England in 1660. John Evelyn records the scene in his Diary entry that day, almost incoherent with excitement:

“This day came in his Majestie Charles the 2d to London after a sad. & long Exile, and Calamitous Suffering both of the King & Church: being 17 yeares: This was also his Birthday, and with a Triumph of above 2000 horse & foote, brandishing their swords and shouting with unexpressable joy: The wayes straw’d with flowers, the bells ringing, the streetes hung with Tapissry, fountaines running with wine: The Major, Aldermen, all the Companies in their liveries, Chaines of Gold, banners; Lords & nobles, Cloth of Silver, gold and velvett every body clad in, the windos & balconies all set with Ladys, Trumpets, Musick, & myriads of people flocking the streetes & was as far as Rochester, so as they were 7 houres in passing the Citty, even from 2 in the afternoone ’til nine at night: I stood in the strand, & beheld it, & blessed God: And all this without one drop of bloud & by that very army, which rebell’d against him: but it was the Lords doing, et mirabile in oculis nostris: for such a Restauration was never seene in mention of any history, antient or modern, since the returne of the Babylonian Captivity, nor so joyfull a day, & so bright, ever seene in this nation: this happening when to expect or effect it, was past all humane policy.” (Diary May 29th 1660)

I’ve written elsewhere that the Restoration, and the festivals held to commemorate it in the years afterwards, became superimposed on older, pagan rituals to welcome in the Summer. That same time, Samuel Pepys saw villagers in Kent hoisting the Royal Standard on maypoles, which captures perfectly the mystical combination of seasonal and constitutional renewal.

Pepys is, of course, our other great Diarist of the period. Evelyn is more high-minded and well-mannered. Pepys, who walked closer to the ground, records having to miss part of the Coronation Banquet, because, ‘I had so great a list to piss, that I went out a little while before the King had finished his ceremonies’ (Diary April 24th 1661). I can definitely imagine this happening to me.

In my last post, I reported on some interesting paintings coming up at Lyon and Turnbull (British and European Paintings May 24th 2017). I’m sorry to say that neither the self-portrait-like gent attributed to Seeman, nor the Riley lady sold, which is a shame. I like to see bold estimates and inventive cataloguing pay off. The Closterman portrait of William Paul of Bray sold for £4,500 including premium, a bargain really. This portrait of a lady, lot 38, intrigued me. It sold for £6,250 on a £5,000 – 7,000 estimate. 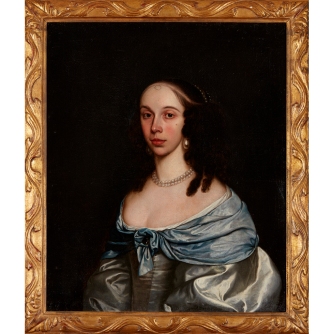 She is attributed to William Claret, who isn’t a name you hear that often. Claret – middle name Wolfgang – might have been German originally. He worked in London for forty years until his death in 1706 as a copyist of Lely and Kneller, but only a handful of original works are known from signed examples and engravings.

This portrait of the 2nd Earl of Bridgewater, signed and engraved, is one of them. Comparison with the Lyon and Turnbull portrait supports their attribution. I wonder if it was traditional. A very good call if not. The lady in blue and silver would be a new addition to his known work, and a very early one, since on costume she must date to c.1660. High-end portrait painting was an intensely competitive business. Even Sir Peter Lely felt rivals breathing down his neck. After 30 years as England’s leading portrait painter he died of a stroke at his easel, because he couldn’t afford to slacken his work-rate with rivals like Kneller beginning to make a name for themselves.

Claret must have discovered that it was more lucrative, and less stressful, to become a ‘approved’ copyist than a sole practitioner. Two more works from later in his career are known, these full-lengths of King William III and Queen Mary c.1690 (Northampton County Hall). They are spectacular Baroque portraits, but though they are original compositions they still rework the official portraits painted by Sir Godfrey Kneller. 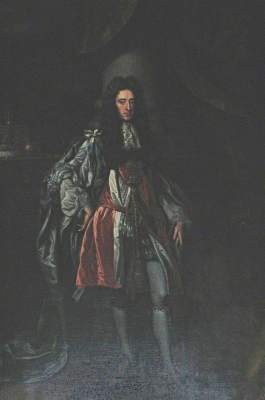 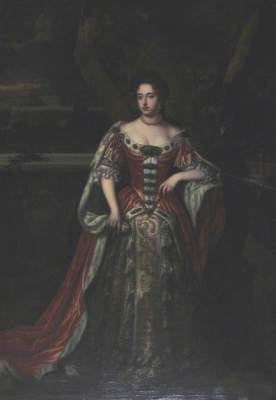 The early portraits in Edinburgh also included this portrait of the Prince of Monaco, lot 43.  I’m sure I can remember it coming up – on the Continent? – a few years ago. 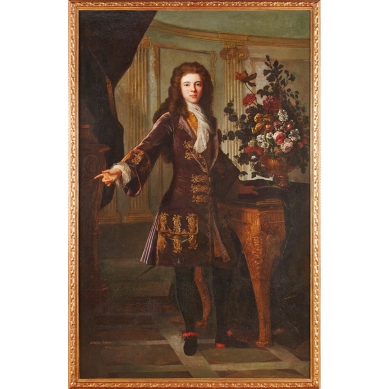 Lyon and Turnbull catalogued it as Circle of Nicolas de Largilliere and it sold for £21,250 against a £10,000 – 15,000 estimate. If it’s not actually by Largilliere (not quite melty enough?) then it’s very close. The still-life might be by a specialist flower painter, and it has smart interior designer written all over it. Perhaps it went back to Monaco, which would be good.

The horrific bomb in Manchester a week ago, and the murder of 22 people demand comment, both as a historian and a human. I am defective on both counts I suspect. As soon as I want to express them, my thoughts on something as serious as this scatter like a handful of dropped marbles. Noble sentiments disappear under the sideboard, and I’m left with intolerant and vengeful feelings. My brother Charlie puts these things much better than me, and I liked his blog post this week written as a response to the tragedy.  I love his title too, Humanity in the half light, which like Wilde I wish I’d written, and soon enough I’m sure I will. Charlie’s post calmly expresses the better side of human nature. We live in a culture which admires, and rewards passion above most qualities. Disproportionately so, I think. To the Georgians, ‘enthusiasm’ was a bad thing. ‘Enthusiasts’ were untrustworthy, shifting, inexperienced and dangerous. The opposite of today, where being passionate about something is often more important than asking whether the thing you’re passionate about has any merit. Our enemies are very passionate people indeed. If we are to be passionate about something, let’s be passionate about continuity, common-sense, and basic human kindness:

“I did something today that I haven’t done for a very long time. Walked into a church and prayed. Leicester Cathedral to be precise. I’d just finished a meeting in the City and felt the need for a moment of peace and reflection. It felt like I was being led by instinct.
There is something about the quiet, solitude of a church that manages to strip everything else away. The greeting at the door added to the feeling of being in a place of warmth and welcome. I declined a tour map and wandered around, taking the time to read the inscriptions on the walls telling the tales of dignitaries who had given service to the people of Leicester. It is hard not to appreciate the interconnected nature of life and to consider our own impact on others.
In the chapel set aside for quiet prayer and reflection, a member of the church was listening to a man’s outpourings of personal injustice and confusion. What struck me was the care by which she listened and the sincerity when she asked how she could help the man.
Good deeds rarely make headlines but here was an example of humanity at work. Hidden away from the cameras in the half light of a building that has been a focus of worship for over a thousand years. And it gave me comfort.”