This Thursday, a new exhibition opens at the Georgian Group, Splendour! Art in living craftsmanship.

Splendour! will celebrate the architects, artists and makers who are keeping traditional crafts alive in this country, and interpreting those traditions for a contemporary audience. I was lucky enough to be able to speak with three of the painters exhibiting in the show, and to discover how they interpret and adapt those traditions for a modern world.

I won’t try to squeeze Alan Dodd, Dick Smyly and Philip Cath into their forebears’ buckled shoes, nor to present them as that imaginary thing, the neo-Georgian painter. They are distinct and outstanding modern talents, but if they might not give the Eighteenth Century as their permanent address it is a place they and their patrons visit often; they embrace its values, and they can be reached there, poste restante.

Dodd has been restoring and recreating Georgian interiors for over forty years. He is, by his own admission, not a painter of the clouds-and-cupids school. His murals open Arcadian vistas in the walls of his patrons’ houses, and conjure plasterwork, tapestries, drapes and chiaroscuro papers in trompe-l’oeil. In this view of the hall in a client’s house, all the features including what looks like a carved marble overmantel are in fact 2D effects in paint. 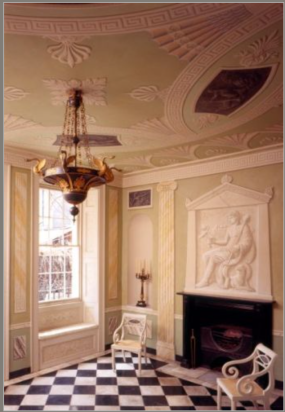 Dodd’s practice began in 1975 with an advertisement in House and Garden, which secured three commissions at once. Apart from a dry spell in the 1990s, during the mercifully brief reign of Minimalism, he has not looked back since. His best-known work includes enriching the Vardy ironwork at Spencer House in London, enriching the staircase at Worlingham Hall in Norfolk, painting Lord Leighton’s unexecuted Pompeian ceiling at Sir John Soane’s House, and recreating Antonio Zucchi’s lost landscape panels at Home House. Dodd’s training would familiar to his Georgian predecessors. He studied for eight years at the Maidstone School of Art, which included drawing from antique sculpture. His teachers there included David Hockney.

Among the Old Masters Dodd admires the painters of the Early Italian Renaissance, particularly Piero della Francesca and Sassetta. 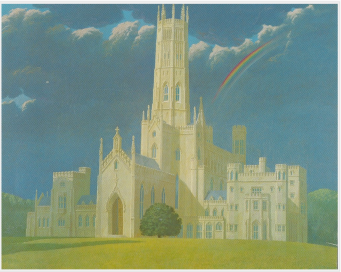 Fonthill Abbey 1974 (Artist’s Collection) uses their palette, with brilliant white against a lapis sky. Dodd takes George Cattermole’s engraving and transforms it into a vision of the New Jerusalem, conveying the same feeling as the Italian Primitives that painting is a stage where heaven and earth meet.  But although, in his time, Dodd has painted on the most authentically renaissance of supports, gesso-prepared oak panels, he is highly resourceful and lateral-thinking. His travel paintings, like The Tower of the Winds 1990 in this exhibition are painted on cardboard primed with Dulux Weathershield. Being a painter is a practical business, and all of the artists in this exhibition combine a respect for traditional practice with an openness to modern technology and methods.

Dodd began his career as a Surrealist. His favourite modern painters are Giorgio de’ Chirico and Paul Nash, whose presence is also felt in Fonthill Abbey. Nash again might be the influence for one of Dodd’s most remarkable pieces, a mural which takes up the whole long wall of a friend’s cottage in Eye in Suffolk 2013. 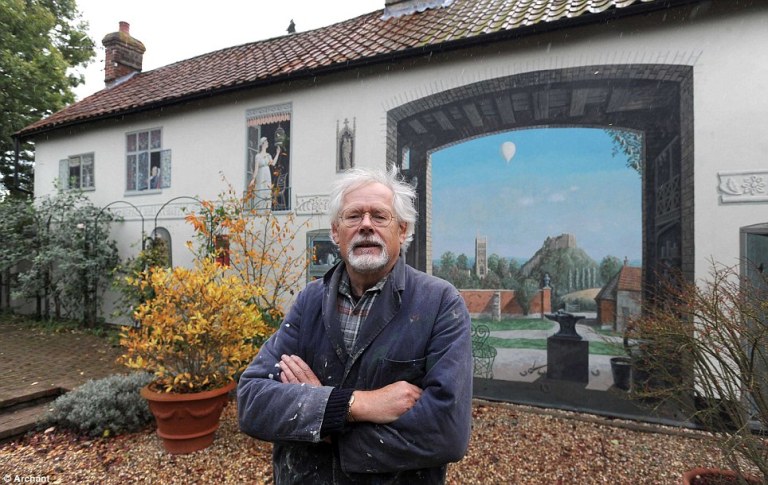 The artist in front of his mural (c)Archant

An illusionistic cart-gate opens in the wall like a proscenium arch, to give a view of the village church and the castle up on a hill, with a balloon hanging above like a Nash moon. It is a beautiful work, all the better for being in a public place where the villagers can enjoy it. How far Dodd’s painting might lead us into further realms of the imagination must remain a guess – he guards his Surrealist works very jealously – but the travel paintings, places curiously empty of people where architecture melts into the sunlight or resolves itself into geometric units, might hint at parallel realms as much as at the classical past. We would not be surprised to meet De Chirico’s Elephant of Celebes there, any more than to find that Pan still walks in the landscape murals Dodd painted for an Arundel restaurant.

Dick Smyly is perhaps a pure Augustan, and his work, in the collection of patrons from HRH the Duke of Cambridge to Downing College Cambridge and the Royal Air Force Club, records a way of life that still largely moves to Georgian rhythms. Smyly trained at Florence in the Charles Cecil Academy in 1991 – 92, where he drew from the nude in the morning, from casts in the afternoon and learnt to paint portraits by the sight-size method, practised by painters from Diego Velazquez to John Singer Sargent. Smyly’s working practice is again a mixture of the old and the new. Where once a painter looking for poses would have had to sketch original paintings, or copy from engravings, these days they can find them on the internet, and photography can be as valuable in preparation as sketching. More traditionally he has a deep feeling for the physicality of oil paint, and his favourite painting, Sir Anthony van Dyck’s Portrait of Cornelis van de Geest (National Gallery) is a hymn to the luscious beauty of lead-white. This is a pigment dear to Smyly’s heart. He grinds lead-white like a Georgian studio-hand, and prepares his own medium to a secret, Seventeenth Century recipe. The result in a portrait like the sculptural monochrome Full-length portrait of a lady in white is breathtaking. 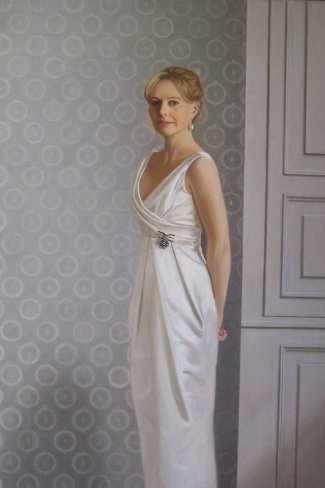 The two country house views in this exhibition, Mortonhall, Midlothian 2016 and Farleigh House, Hampshire 2009 recall Richard Wilson in their palette and Claude Lorraine in their light and composition.

This is intentional. Smyly’s work is often commissioned to hang alongside Old Masters, and his patrons appreciate the consistent harmony of tone and effect. A work like this can be placed next to George Barrett the Elder as comfortably as Turner designed his paintings to pair with Claude’s. Smyly’s work is alive with references to past sources, wittily digested, and – crucially – appropriate to their subject. Portrait of an Officer of the 14th/20th Hussars on the Cresta Run 2003 with his toboggan and crash-helmet under his arm quotes Giovanni Battista Moroni’s Knight with his Jousting Helm (National Gallery).

Viewed en masse Smyly’s portraits are a remarkable historical document, particularly those of older sitters, who are shown in private State before the portraits of their ancestors, proud and vital, like tigers in half-change.

Portraiture, of course, is theatre, and Smyly recognises that portrait painter is like a director who must coax the best possible performance from their actors. He would certainly agree with Philip Cath who has said that the most difficult part of painting a portrait, ‘is the sitter’s mouth when they know you’re painting it.’ Cath might be presented as the Young Turk of this group. He and his wife Khloe are recent graduates of Goldsmiths’, and together they exhibit as the contemporary artist ‘Mr and Mrs Philip Cath.’ They were nominated for the Caitlin Art Prize in 2014 and with their dramatic style they have been described by the Brighton theatre director Nicholas Quirke as ‘the heterosexual Gilbert and George.’ Chaste modernists at their recent Almanac exhibition Mr and Mrs Cath and their Lovers were surprised by their close relationship with traditional art, but the Caths’ homage is sincere and deeply felt. As a portrait painter Cath casts himself in a traditional mould, inspired by and endlessly studying the work and techniques of the great portraitists, particularly Van Dyck and Reynolds. He studied at the Prince of Wales’s Drawing School, but his portrait style is self-taught, based on first-hand observation of the originals.

English painting is his spiritual home – ‘it is so full of life’ – but a work like the Portrait of Maria do Carmo Matosinho Peres de Pontes show an emotional affinity with Spanish art, and the allusions to Juan Pantoja de la Cruzas well as to Velazquez and Goya produce a stately elegance that is at once austerely classic and thoroughly modern, a pavane in paint.

Alongside portraits of a university friend and his circle, Cath has produced a series of still-lifes of defunct television sets treated like Dutch memento mori, brooding perhaps on the evanescence of fame. Working in partnership with Khloe, he has painted a modern morality cycle Eve’s Progress taken from installations of balloon sculptures and found objects, a piece with a nod to John Currin and Jeff Koons as well as William Hogarth.

His most remarkable achievement, however, remains his easy mastery of the full-length swagger portrait.

Portrait of a Major in the Royal Scots Dragoon Guards with his horse 2012 (Private Collection) based on Reynolds’s Portrait of the Prince of Wales (formerly in Lord Mancroft’s Collection) and the Knelleresque Portrait of a Cumbrian Gentleman, his Wife and their Children in a Garden 2010 (Private Collection) are superb essays in portraiture’s most taxing form. Two portraits painted specially for the exhibition, an allegory of Splendour and a portrait of the Collins Sisters, the Georgian Group’s youngest members, will be unveiled at the opening.

Like the other artists in this exhibition, Cath maintains a balance between historical chastity and modern convenience. He paints oil modelli for ambitious compositions, but when the Major’s own horse proved a troublesome sitter, Cath drew from a life-size mosaic made up of a hundred photocopied details of Reynolds’s original. He pioneered this technique when creating the horse in his manifesto, The Triumph of Painting 2010. Cath is an artist who turns his hand to every aspect of making, and he has an overriding commitment to craft. The mummy-like figure of Painting was modelled by Khloe swathed in bandages and Painting’s banner that she carries in her hand was painted after a flag made by Cath himself, and on which he embroidered each battle honour.

To these painters and their patrons, ‘Tradition,’ as Alan Dodd says, ‘lives on; it never dies.’ And as all painters come to realise, tradition demands more than aesthetic lip-service. It is understood through the wisdom of other painters. Such advice is rightly treasured, and the best instruction of any age must be the word that David Hockney painted on the Print Studio wall at the Maidstone School of Art when Alan Dodd was a student; In letters five feet high, it read: WORK.

Splendour! Art in living craftsmanship is at the Georgian Group, 6 Fitzroy Square, London W1T  5DX from February 2nd to February 25th, and includes a programme of craft demonstrations, workshops and discussions. Best of all, admission is free.

2 thoughts on “Those splendid Georgians: a new exhibition at the Georgian Group”