Through Spain with Wellington: the Letters of Lieutenant Peter Le Mesurier of the Fighting Ninth is a newly-discovered series of letters by a British officer in the Peninsular War, available here on abebooks. 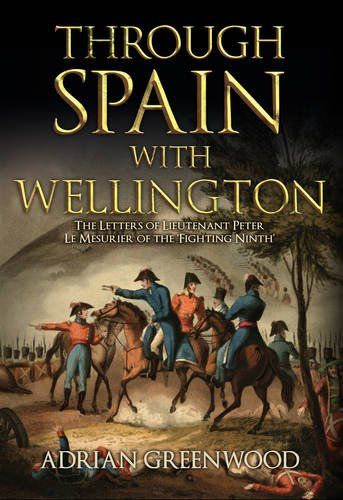 I’ve just ordered a copy. It’s a book I’ve been meaning to read for some while. For one thing, it is right up my street, and for another I feel it is my due to the author. As everyone in the Trade will know, the dealer and historian Adrian Greenwood was murdered earlier this year, by a lunatic obsessed with money and celebrity. Adrian had made his name as a book dealer, and he hit the headlines for buying an unpublished note for the Harry Potter books at auction, and most recently for discovering a first edition of Wind In The Willows.

When I read the news back in April, Adrian’s name rang a vague bell with me. I remembered meeting him a few years ago on a book stand at one of the Fairs, and taking his card. At the time I hadn’t recognised him, but I realised from the obituaries that he had been at Christ Church a couple of years below me, where he was a familiar character by sight. He would go out beagling wearing a chalk-striped suit when everyone else was in Barbours and wellingtons. Even at Oxford in the early ’90s, a man walking across a ploughed field in a  blue overcoat and black shoes while reading the Times was quite remarkable.

Adrian was also known as the man who dealt in fridges, an important commodity in College. Without a fridge in your rooms you were reduced to keeping milk on the windowsill, where it would go off by lunchtime, even in Winter. When I was living in, you’d buy your fridge from someone in the year above just before they moved out, for £7, from memory. No one had thought of buying up a whole year’s fridges en masse and cornering the market before. But Adrian did, and from what I’ve read since of his career, he understood at once that the essence of dealing is buying and selling. Whatever it is. A dealer deals. And works. In slack periods after Oxford, he sold the Yellow Pages and thought about applying for a job as a pall-bearer.

He was one of those dealers I admire – who relish the marketplace – and starting out he was quick to appreciate the value of a job lot, buying up unclaimed British Rail lost property, boxes of books and old furniture. Anything where there was room for a profit. Twenty years ago, when I was portering at Bonhams in the last glory days of Brown Furniture, I remember seeing him through a swing-door when he was the go-t0 man for mahogany dining tables.

This last year he was all but retired from dealing – which means he must have done very well indeed – and able to concentrate on his real passion, Nineteenth Century military history. He published two books, Victoria‘s Scottish Lion: The Life of Colin Campbell Lord Clyde (History Press, 2015) shortlisted for The Society for Army Historical Research’s 2015 Templar Prize and Through Spain with Wellington. These books are his memorial. I am certain that he met his end with immense bravery, and didn’t give in an inch.

One thought on “A book for 2017; Adrian Greenwood’s ‘Through Spain with Wellington.’”