When you’re looking through auction catalogues, or country house labels, you spend a lot of time wondering, Who are all those now-nameless painters? There’s no such person as ‘Circle of Kneller’ but they obviously painted a lot of pictures.

So it’s very satisfying when you grab a trailing end of one of these less well-known artists – an attributed, documented work – and begin to recognise other similar paintings which might also be by them. To pull them all together, to follow this yarn winding metaphor, and build them an oeuvre.

Twenty years ago an old university friend and I were sharing a flat in Camberwell. He wanted some old portraits to give a mid-Georgian basement the feeling of an early Georgian garret, so we went to Bonhams Knightsbridge. This was the first time I’d been to an auction. He bought a large 50 x 40 inch three-quarter length portrait of a stern man who looked like a Scottish judge and a 30 x 25 inch oval of a man in armour. Then we put both of them in the back of a VW Polo and set off back South again. The 50/40 had a thin frame on it, but with the backseat down it fitted into the car, just, sticking so far over the front seats we were bent double over the dashboard. There was a hairy moment with a lorry at Oval, but traffic was so slow there was no real damage done and it was all smiles and laughter in the end.

The oval man was labelled on the back – and catalogued as – Richard Grey of Backworth, Northumberland, by Timothy Stephenson. The Grey portraits at Bonhams had come from Backworth via inheritance at Poundisford Park, Somerset.

There were three other ovals of the Grey family in the sale, Richard’s brother Ralph and his wife. They weren’t labelled on the back and went through sale as ‘Circle of Closterman.’ A further portrait of Mrs Grey senior, their mother, was called ‘Circle of Riley’ from memory.

In British Eighteenth Century Painters Professor Ellis Waterhouse lists Stephenson as ‘portrait painter active in the North of England, certainly at Newcastle and possibly also at Carlisle and York.’ He mentions this mezzotint by J. Smith after Stephenson’s lost portrait of Thomas Smith Dean of Carlisle (National Portrait Gallery).

Waterhouse also mentions two ovals 30 x 25 ins. of ‘Ralph Grey and his wife’ in a Rileyish manner (formerly at Poundisford Park), were painted 1701 at Newcastle and appear in accounts at £10 5s to ‘Mr Stephenson.’

This sort of documentation is gold-dust. It was clear that these portraits of Mr and Mrs Ralph Grey are also by Stephenson.

Already you can see that Stephenson is a recognisable artist. He must be London-trained, with a hint of Riley-Closterman, but his compositions are distinct, and so is the characterisation of his sitters.

From these portraits it looks very much as though Stephenson also painted the portraits of Sir William and Lady Blackett of Wallington in Northumberland.

I haven’t yet found an image of Mrs Grey senior’s portrait, so you will have to take my word for it that it was compositionally very similar to Lady Blackett’s, even to the elaborate headscarf, and is again I’m sure painted by Stephenson. There are two further ovals of the Blacketts’ children at Wallington which are close to Stephenson but probably not by him.

Most recently, this portrait came up for sale at Eldred’s in Massachusetts June 27th 2014 lot 657. 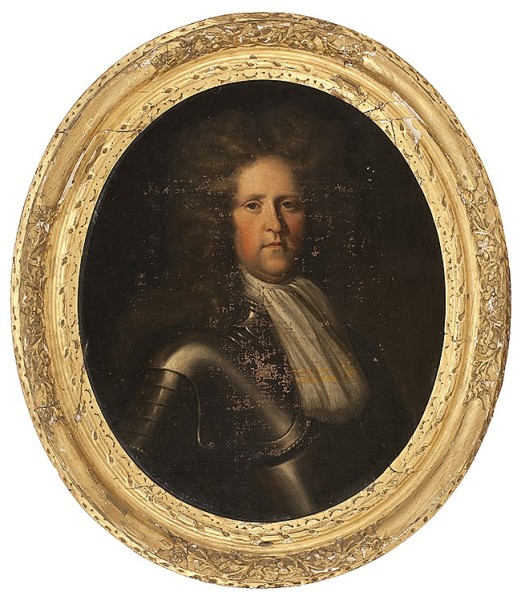 The lot details mentioned a handwritten label verso John Bowes of Tuns… The county of Durham, married, Hannah Matthews of Cleadon in the County of Durham, had .. Married, who married Thomas Fenwick of Carsdon, Isabelle who married Michael Pearson of …

So, another sitter from the North East, and a composition, characterisation and handling which all point to Stephenson.

These rediscovered Stephensons are all 30/25 ovals. So far there is no example on a larger size. This portrait of Julia Conyers Lady Blackett seems to repeat Stephenson’s face-pattern and starched linen, but without examining it in the flesh it looks like the work of painter in the next generation, and the National Trust attributes it to Enoch Seeman.

Further work will no doubt reveal more examples connected with collections in the North East, and we can construct a wider oeuvre, and perhaps a skeleton biography, for a highly accomplished Northern painter.