Over coffee the other day a friend of mine said that I hadn’t posted much lately on here. There are many things I’ve lined up, and this afternoon – when I’m at my own devices for a few hours – would be a wonderful time to write them. But last week Pog had a dismal afternoon while I was out and busy rather than spending time with him, so I will go and sit on the sofa with him instead, and read Anna Keay’s The Last Royal Rebel; the life and death of James Duke of Monmouth. Zak got it for me the other day and it’s a superb read.

Just to give you a taste of what’s coming up tho, the next two posts will be 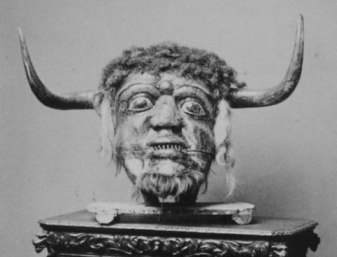 Saturday June 25th Lapped in a morel’s skin; the Skimmington Ride and Rough Music (The Dorset Ooser, one of only two known photographs, taken by JW Chaffin and Sons of Yeovil c.1890)

When I have heard back from Ightham Mote about their painted Tudor ceiling I will squeeze in a post about that too. Now to go and sit with Pog and read.