This week Dad sent me some interesting photos after his visit to our restorer, who is working on the large panel painting we bought last year, The Fish Market by Joachim Beuckelaer (c.1533 – 1575) signed and dated 1568.

For one thing, it was reassuring that a painting which started off looking like this… 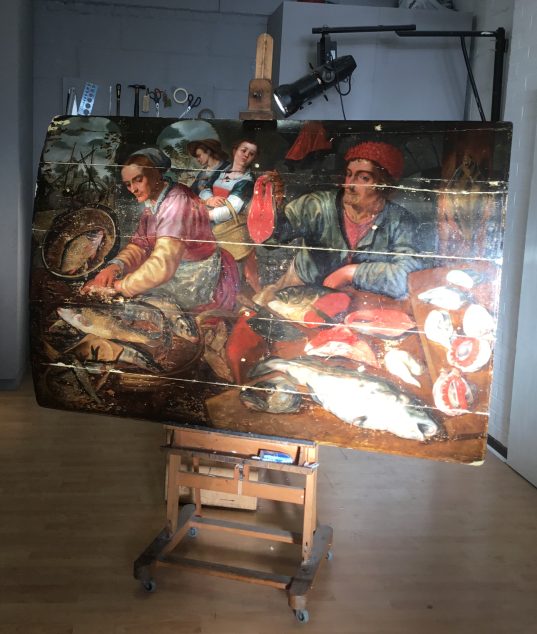 Even more excitingly, the artist’s I B monogram, on the bottom corner of the shelf at the right, underneath the chopped salmon, which was revealed early in cleaning 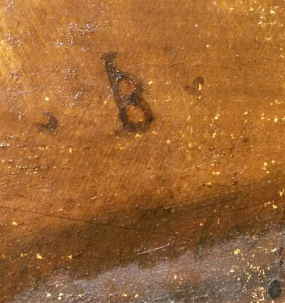 has a script signature underneath, painted into the edge of the wood. It is just visible in the earlier photograph, and is more obvious here in this photo taken under UV:

It is similar in form to the painter’s signature on Beuckelaer’s ‘Water’, one of the National Gallery’s Four Elements series, which I was able to take a picture of thanks to their generous photo policy. The Gallery was fairly empty, so I was able to enjoy their relaxed attitude without being annoyed by other people doing the same thing. 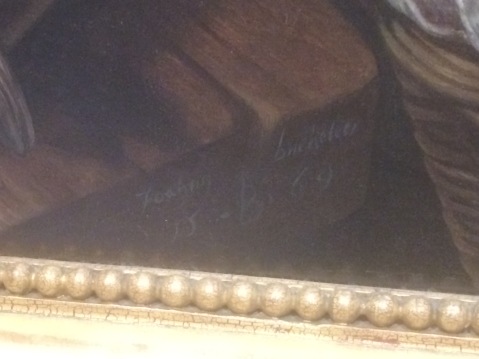 The Four Elements fill a tribune at the meeting of four galleries. They make a stunning ensemble; there’s such a raucous vigour to them, the bright colours, the tangible realism of the still-life – the fish looks wet to the touch – and the way that the perspective has been dramatically raked not just to thrust the merchandise, as the familiar phrase goes, ‘into the world of the viewer’, but to spill it right in your lap.

These paintings were made at a time when, even in a city like Antwerp, hunger was only one bad harvest away. The mounds of ripe fruit, game-birds, succulent meat and fish for the frying let us wallow in the erotic pleasure of plenty. Like a Sixteenth Century Hogarth or a red-top journalist, Beuckelaer can have his cake and eat it, titillating and finger-wagging at the same time. With buxom young women to the fore and a Bible scene in the distance Beuckelaer’s earthy delights pack a potent message: Antwerp has never had it so good; enjoy it, but remember God from whom it all came, and to whom you’ll have to answer for it in the end.

Standing in front of the National Gallery paintings at various times during the restoration of our picture has been quite an experience. They set a very high bar, and we needed to see the same quality of work coming through under dirt and old varnish. I was delighted then when Dad sent me his photos from a visit to the restorer’s this week. The opal translucence of this codfish on the slab is just the sort of expert touch I was looking for, precisely the effect of the National Gallery painting, as if the fish is only just giving up its last breath.

One thought on “In the restorer’s studio: Beuckelaer’s ‘Fish Market’”