One of my great ambitions – ever since I bought a small portrait by John Closterman (1660 – 1711) nearly twenty years ago – has been to find one of the painter’s lost self-portraits. George Vertue mentions them in his famous Notebooks:

‘Mr John Closterman his picture painted by himself in the hands of Mr Cope. Another in the possession of Mr Tiburin.’ (Vertue i, 22 and 29)

Malcolm Rogers identifies Mr Cope as Anthony Cope (d.1738), a member of the Rose and Crown club of artists and cognoscenti, and Director of Kneller’s Academy in 1711. Mr Tiburin was a friend of Closterman from Osnabruck, a fellow painter with whom he had first come to England, and who lived long enough to be one of Vertue’s sources in the 1730s.

Since Vertue, there has been no reference to either painting, but this portrait surfaced at a local auction in 2013. The removal of discoloured varnish and later overpaint to the face has revealed a work of remarkable spontaneity. The broad, sketchy technique, particularly in details such as the hand, and the overall composition argue for a self portrait, persuasive evidence that here we at last are seeing Closterman by himself.

Expert opinion has confirmed the attribution to John Closterman and dated it to c.1690, when the artist would have been thirty years old. Opinion has also very kindly agreed that it is a ‘possible self-portrait.’

The likeness cannot be corroborated without another portrait of Closterman to compare it with. Tantalisingly, the painting was sold at Christie’s July 24th 1981 lot 128 (as John Baptist Closterman, portrait of a gent in grey), but due to Christie’s Fifty Year Rule I will not be able to find out who consigned it, or whether there is a provenance that leads back to Cope or Tiburin, until 2031.

In terms of iconography and execution, there is a compelling argument for my painting being a self-portrait, not least in its deliberate emulation of Sir Godfrey Kneller’s self-portrait painted a few years previously, which Closterman would have known at least as an engraving if not in the original.

At the date when Closterman painted this portrait, he was establishing himself as an independent figure, after working for some years as collaborator and junior partner to John Riley, who had died in 1691.

Closterman’s early independent work shows a keen awareness of Kneller, who as London’s most successful portraitist and a fellow countryman of Closterman’s was both a commercial rival and an artistic inspiration. Closterman adopted one of Kneller’s key studio practices at this date. He made life size study drawings on blue paper for example, something largely associated only with Kneller, so that until recently Closterman’s study of Henry Purcell in the British Museum was misattributed to Kneller.

Portraying himself as another Kneller in his self-portrait, quoting Kneller’s pose and grey-blue painting-gown, could be both an advertisement and a personal manifesto – a way of announcing to clients, and to himself, that he had arrived, much as Rembrandt’s followers would model their self-portraits on his.

Stylistic elements to the portrait also suggest that it is a self-portrait. The broad handing is unusual for Closterman’s commissioned work. The pose of the hand is one that the artist uses elsewhere, reversed in the portrait of William Paul of Bray, for example (Christie’s October 29th 2015 lot 33, detail attached).

But the degree of finish in William Paul’s portrait, a typical commissioned work, is quite distinct to mine. The hand in my painting is more vigorously modelled, and the broad sketchy handling is a beautiful instance of Closterman composing straight to canvas. 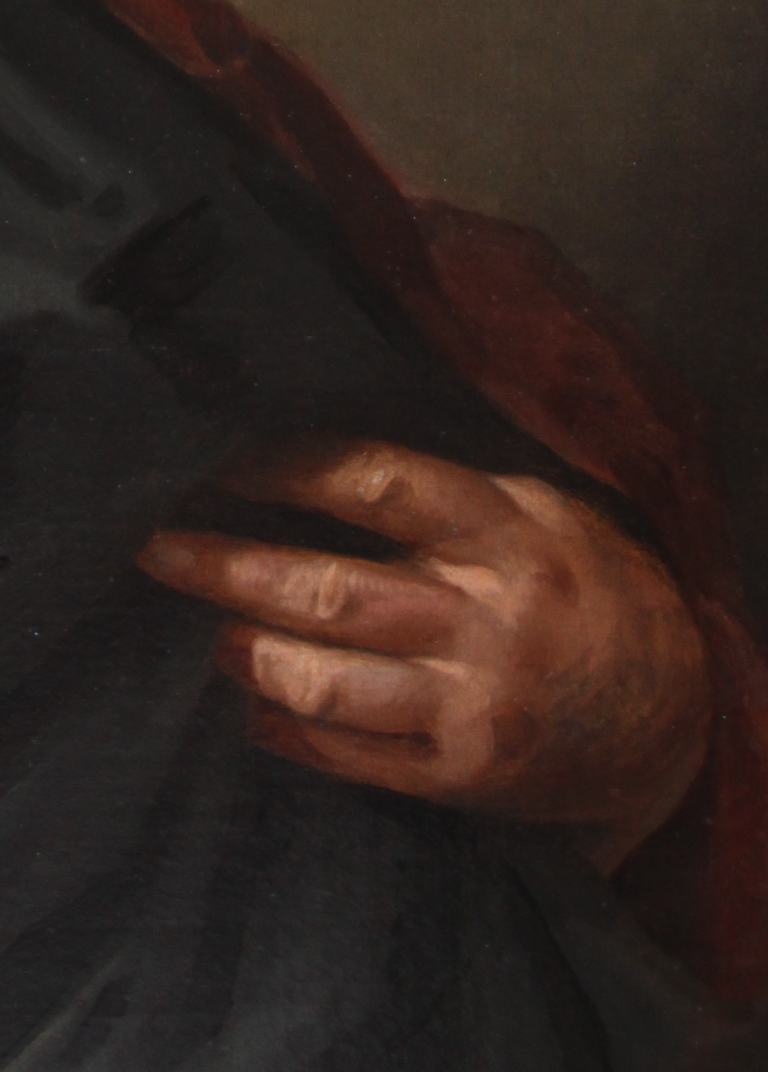 Equally, the collar in my painting is brushed in with two heavily-loaded strokes, producing a broken highlight like a rapid sketch. This broader, more spontaneous handling is entirely atypical of Closterman’s formal commissions, and argues for an work painted for the artist himself or for one of his connoisseur friends

The gown in my painting is, again, unlike the drapery of Closterman’s usual sitters, without the usual high silk sheen. Instead it is shown with the highlights hatched in almost schematically, a slate-blue gown of plain stuff, suitable for painting in.

By chance, this dark grey gown also predicts the subdued tonality of Closterman’s later work, adopted as part of his patron the 3rd Earl of Shaftesbury’s neo-Platonic programme to emulate the more restricted palette of ancient painters.

The pose also suggests a self-portrait. The sitter’s arm projects forward out of the picture plane into the bottom left corner where it is then hidden beyond the illusionistic spandrel. In a self-portrait this would be the artists’s painting arm reflected in the mirror as he reaches forward to the canvas.

There is one last, tantalising detail. The frame – probably dating from the mid-Twentieth Century – has a label on it saying ‘JB Closterman 1656 – 1713.’ Until Professor Doug Stewart discovered and published John Closterman’s will in 1964, ‘Closterman’ was believed to be John Baptist Closterman (1656 – 1713), a confusion which had crept in since Houbraken’s Eighteenth Century biography.

The will showed that this were two Closterman brothers, John (1660 – 1711) the famous portraitist, and John Baptist, (1656 – 1713) his assistant and an occasional painter whose style is quite distinguishable. Opinion confirms that my painting is by the more talented John Closterman. But at the date the frame-label was written, the Clostermans were believed to be a single composite entity called JB Closterman. I wonder, therefore, whether this frame label originally identified the sitter as much as the artist.

One thought on “The painter by himself: a Closterman self-portrait at last?”