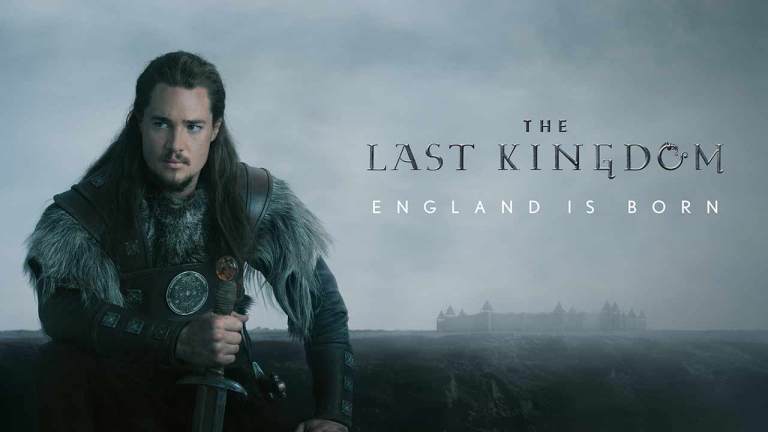 Lately we’ve been watching The Last Kingdom, a BBC TV adaptation of Bernard ‘Sharpe’ Cornwell’s novels about the Saxons and Danes in Ninth Century England.

We’ve got a few episodes to catch up on – me more than Zak; it’s terrific stuff but it’s shot in soporific semi-darkness which puts me to sleep.

-Is this the same time as Alfred the Great? Zak asked me.

-No, I said, he’s the next century

Just as someone onscreen said, ‘Here comes Alfred ,’ and I realised I know next to nothing about Anglo-Saxon history. So I decided to get a book to read up on it and settled on Robyn Fleming’s Britain after Rome: the fall and rise 400 to 1070.

In her introduction, Professor Fleming makes the crucial point that you can’t write about the past without interpreting it through the prism of the present. Very true, though it’s fifty/fifty whether it’s a reliable glass.

A few years ago, thanks to a friend’s father, I sat through a GCSE history lesson, and I was interested that the Sixteenth Century Northern uprising known as The Pilgrimage of Grace was still taught – as it had been when I was at school in the super-rational 80s – as a political protest rather than a religious revolt. No one today would doubt the primal power of religious feeling to inflame multitudes, at a time when the Sixteenth or Seventeenth Centuries feel closer than the Twentieth.

I was surprised then to read in Professor Fleming’s book of an another, unexpected echo of the present in the past. I had assumed that Romano-British cities were abandoned almost overnight when the country was overrun by Picts and Scots and Saxons, people unused to urban living who left the Roman cities with their baths and forums as ghostly ruins.

Not so. Leaving aside the question of how gradually or not the Saxons arrived and settled, archaeological evidence shows that the towns were abandoned even before the first Saxons even got here in the early 400s. The country was economically bust with the cost of coastal defence, central administration had collapsed and the native aristocracy were already leaving their country villas and withdrawing to their ancestors’ hill-forts.

Manufacturing industry in the towns died out; but large townhouses remained, and even thrived for a while, with new ones built on the site of abandoned workshops, like factory loft conversions and high-end redevelopments today. Daily essentials like cooking pots and nails might have been in short supply, but you could still find someone to make mosaics.

Cities had a brief, second life as the site of second homes in exclusive communities, before their owners finally left them for the hill-forts and mead-halls, and their warrior life as proto-feudal lords. I don’t want to push this parallel too far, but it’s interesting that today the Scots and Border gentry are doing up their Pele Towers again, like late-Georgians building Wyatt castles just before the age of Revolutions. Perhaps they are getting ready to batten down the hatches; one gentleman there told me that it would be more use these days for his son to learn spot-welding than Latin.