At the moment I’m reading a fabulous book called A Forgotten John Russell, being letters to a Man of Business 1724 – 1751 edited from a family collection by his descendant Mary Eyre Matcham in 1905. Russell was Naval Clerk – ‘Clerk to the Cheque’ – at Gibraltar, Woolwich and later Deptford, and served in between as His Majesty’s Consul General at Tetouan in Morocco, and this bluff no-nonsense collection of letters from ships’ captains and friends is a refreshing change to the artful, mannered tone of a lot of more famous Georgian letters.

Russell’s portrait, probably by Jonathan Richardson, found ‘forgotten and unframed’ in an attic with boxes of his correspondence, frontispiece to the book

Mary Eyre Matcham’s book has been referenced before as a source for Naval historians, with a  wealth of detail about captains, campaigns and the daily running of the Royal Navy. But has slipped by art historians unnoticed. It includes an interesting set of letters from John Ellys, a portrait painter who gets a bit of a rough ride from later critics. I knew him only as a old-guard portraitist who criticised Reynolds for not painting like Kneller – ‘Shakespeare in poetry and Kneller for painting, damme!’ – and was said by Horace Walpole to have given up painting when Sir Robert Walpole appointed him Lion Keeper at the Tower of London, the site of the Royal Menagerie, as a reward for his work in advising on Sir Robert’s art collection at Houghton. When Ellys died his obituary recorded: ‘Sept 15 1757. At London, John Ellis, Esq., Keeper of the lions in the Tower.’

The letters show that Ellys pursued painting and lion-keeping in tandem.

‘Dear Sir, — I received the Ambassador’s picture, which I painted myself and if it was made a present to you I am very glad of it. I’ll make it as good as I can for you, bu I would by no means have you alter the dress, for it was painted the time the late queen died [November 1737] and it being his mourning makes it particularly historical.

Gaudy draperies cheat the eye, but never are they real good pictures that have them. If you’ll be so kind to send me the name of his excellency I’ll write it on the picture as also the date &c. and walk the first frosty weather, for it’s a dirty ride and a long way on the stones. I am yours at all times John Ellys.

‘ My humblest services attend your Lady and family. If you could write to any Gentleman you know for a couple of young lions kept together, you would greatly oblige me.’

In 1745, Ellys offered to paint Russell’s entire family for free. It’s interesting to read that he couldn’t be seen working on a Sunday, an idea that we think of as far more Victorian than Georgian.

‘. . . After the pleasure of seeing you at the Tower, I went to Covent Garden, where I met an order for attending a Gentleman Saturday. He is a person I dare not refuse, so I’ll wait on you Sunday morning, but if you don’t choose for me to be there Sunday, send on Friday and I will come that day. Be so kind to send an old little tablecloth to put over the picture, for a sailcloth is too harsh and rubs it too much. I may be in the back room Sunday and not known to be there, for painting of a Sunday to some people of nice consciences looks not well. . . .’                        p254

This next letter a few days later describes an Eighteenth Century ploughman’s lunch. The reference to the ‘cloth’ or canvas for a ‘pastoral’ suggests that the Russell family portrait was going to be a group in a landscape.

To carry things backwards and forwards is worse to me than painting twenty pictures; if I could be in any room where nobody would come tointerrupt us, I should do as well again, with only you and my Aid de Art and not such a person known to be in the house as myself.

As for dinner time, I had rather you would send up a piece of bread and cheese and some small beer, or a bit of salad, than all the rareties in the world,for I hate full meals, I am too fat already; have a great number of pictures that I have promised to do and if I make myself heavy, I shall go to sleep and do none of them.

And I like this last letter, with its attack on the star drapery painters who were enjoying such a vogue at the time, with one artist, Joseph van Aken painting the costumes for Hudson and Ramsay and a string of other portraitists. Not to mention Ellys’s sense of humour about being better regarded as a painter abroad than at home.

25th May. My business calling me to the Tower, I shall always come from thence in the morning. I should get my pictures done sooner, if I did not do every part of them myself, for I may tell you as a friend, (for I am not dealing with you as a painter) I never liked the picture in my life which was of two hands on one cloth ; for the drapery-painters always make the drapery more conspicuous than the head, so in reality it’s a picture of drapery, with a headput to it, as a Background. All things are a trade where credulity is necessary to carry it on, but as I do these things not on that footing for you, I speak the freer. I have done the head in the half length of Sir Charles Wager and my Soothers like it very much. I’ll do all your pictures by degrees, but as I have but one pair of hands, a bad head and many things to do besides painting, a little patience will much oblige

Yours always at Command

Ellys had painted the great Admiral Sir Charles Wager before, in this highly Knelleresque portrait engraved in 1726.

Sir Charles was also Russell’s patron, and Russell might have secured the commissions through his influence, so the family group could have been a way of Ellys saying thank you for this and other work.

In the salerooms, ‘Ellys’ used to be a bit of a grab-bag for the stodgier kind of Kneller-circle portraits, so it’s good to be reminded by images on the NPG site that he was a more interesting and far more able painter than people think. These portraits – mostly now lost and known only from engravings -show that Ellys that  had a good line in painting actors, actresses and prize-fighters, the faces of Covent Garden where he lived.

George Vertue gives a fairer picture of Ellys. Dad has very kindly sent me the passages from Vertue’s Notebooks where he records how in 1729 Ellys, formerly a pupil in Kneller’s Academy further improved his painting by copying from Van Dyck, Lely and Kneller in the Royal Collection. At the same time, with the support of the Duke of Montagu – another friend and patron of John Russell – Ellys had bought a share in the Office of Arras Maker from Moses Vanderbank, younger brother of John Vanderbank the portraitist. This brought him part-ownership of the Soho Tapestry Factory and the monopoly on making tapestries for the Royal palaces.

By 1737, according to Vertue, Ellys was being employed by the Earl of Pembroke, and he had painted Fredrick Prince of Wales whose Sergeant Painter he had become in 1736. Judy Egerton’s superb DNB entry refers to two ‘Pastroll Paintings… of figures big as the life’ by Ellys that William Chambers saw at Kew Palace later than century. These lost paintings, like the ‘pastoral’ referred to in Ellys’s letter here, suggest that his work was broader in scope than mere imitation of an earlier style. Frederick was a fan of modern painting, and he liked artists working in the new Rococo style. The Kew paintings must have been produced for Frederick, and may have been similar to the large figure-in-landscape groups that Francis Hayman was painting at this date for Vauxhall Gardens.

Despite this patronage Ellys never became fashionable. But he had a good head for business and he diversified more than many painters did. As well as painting, and his involvement in the Soho Tapestry Works, he managed a third share in the Drury Lane theatre on behalf of Robert Wilks the actor’s widow. In the 1730s he sourced paintings for Sir Robert Walpole and advised on his famous collection – negotiating the purchase of Van Dyck’s Rest on the Flight to Egypt (Hermitage, St Petersburg) in Rotterdam – and in 1739 he was rewarded with the office for which he is now famous, Keeper of the Lions at the Tower, with responsibility for feeding them. This brought him 9 shillings a day and an apartment at the Tower, which he enjoyed for the last twenty years of his life.

The best tribute to his character must be the popularity he enjoyed with his fellow painters, a gregarious, likeable figure, one of the club of artists who would meet at the Rose and Crown Tavern. Hogarth was a particular friend, and the two of them revived the St Martin’s Lane Academy together after the death of Sir James Thornhill. Hogarth’s Southwark Fair, shown here in an engraving, includes a portrait of Ellys’s sitter James Figg on a horse with sword drawn ready to keep order at the right, and Judy Egerton says, just visible in the middle, raising a cudgel to defend Lavinia Fenton, the only known portrait of John Ellys. 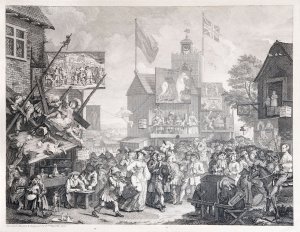 Hogarth is right to suggest that Ellys could look after himself in a fight. When Rysbrack was working on his statue for Hercules for the gardens of Stowe (now in the Victoria and Albert Museum) he modelled the body from the most famous boxers and bruisers in London; John Ellys modelled the thighs.