In this month’s Country Life, historian and botanist Mark Griffith publishes what he claims to be a newly-identified likeness of William Shakespeare. I was keen to read the article, so I called into Sainsbury’s on the way home after my shift yesterday. But I don’t take my wallet to work with me, and this post is based on what I could digest speed-reading Country Life in the magazine aisle. So, with apologies for all and every error, this I think it is the gist of the argument:

Dr Griffith is writing a book on the Elizabethan botanist and surgeon, John Gerard (c.1545 – 1612), author of The Herball or General Historie of Plantes (1597). The frontispiece engraved by William Rogers shows a garden, and Dame Nature surrounded by four figures. When Griffith realised that the garden shown in the lower vignette represents a real garden, he decided to see if the figures represent real people.

The top two were easy: I agree that they are portraits of John Gerard himself, and Rembert Dodoens (1517 – 1585), the Flemish botanist who Herbal of 1544 was Gerard’s principle source. What Gerard added to his own book, as well his own remarks, was the flora of North America, the first time it had published in Europe.

Dr Griffith then takes us one stage further: he argues that the third figure, bottom left, must be Lord Burghley in the guise of Solomon. Quite possibly. Lord Burghley was Gerard’s patron; he was superintendent of Burghley’s gardens, and The Herball is dedicated to him.

Then we come to the fourth figure, bottom right, which Dr Griffith believes to be Shakespeare at the age of 33, the only portrait of him concretely dated to his lifetime. 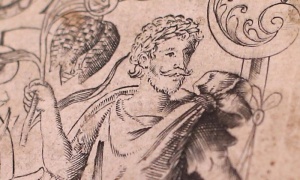 Dr Griffith argues that the classically-inspired figure shows a poet (in laurel wreath) holding a snakeshead fritillary, into which Adonis metamorphoses in Venus and Adonis. This flower, which was only discovered in 1571, appears nowhere else in literature. Interesting. The figure is also holding a cob of sweetcorn, which he says could refer to Marcus’s speech in Titus Andronicus (1591) about healing the rift in Rome: O let me teach you how to knit again/ This scattered corn into one mutual sheaf.

As I type this, I’m surprised that Dr Griffith hasn’t used this as an allusion to the Reformation, and Shakespeare’s possible Catholicism.

But beyond knowing that Shakespeare wrote ‘keck’ for cow parsley, as we grew up saying in Stratford, I know nothing about botany in his plays. And without the expertise to dispute Griffith’s plant-based argument, which is extensive, I can’t strictly be persuaded by it either. Does the juxaposition of French and English irises really refer to Henry VI Part One (1591)? Perhaps.

The main plank of his identification rests on the interpretation of a calligraphic rebus under the fourth figure. Among other strokes it includes the numeral 4, and the letters W and OR, which – according to Griffith – stand for or the heraldic metal, gold. A diagonal stroke alludes to the bend on Shakespeare’s coat of arms or on a bend sable a tilting spear of the first tipped argent. Shakespeare’s coat of arms shown in code, with 4, quattuor in Latin, which sounds like the verb quatere ‘to shake.’

This is interesting. But deciphering codes and symbols is notoriously tricky. It can feel like numerology. It’s easy to find what you’re looking for. The other day I was trying to persuade Dad that a Flemish audience would have read the flatfish hanging against a post in ‘The Fishmarket’ as a reference to Plato’s allegory about searching for a mate. But is it really? How can we be sure what was going through someone’s head 450 years ago? For all I know, ‘flatfish’ could’ve been Antwerp slang for a husband who was all talk and no trousers.

When Dr Griffith talks about heraldry, he is on ground I understand.

I can’t remember the exact argument for the strange shield under the Burghley-figure.

There’s an ermine shape in the middle, a maunch, a figure based on a lady’s sleeve. There’s also a sort of E-shaped label. Perhaps this does indeed describe a lady’s ermine sleeve and the letter E for Queen Elizabeth; and the horizontal stripes could echo the bars in Lord Burghley’s real coat of arms.

Dr Griffith argues that Shakespeare wouldn’t have been shown with the arms that had recently been granted to his father because they were John Shakespeare’s not his; arms, he says, can only be used by the grantee. This is true, but Shakespeare could have used the same arms during his father’s lifetime, with a three pointed label overlaid on them, to signify he was the eldest son of the bearer. 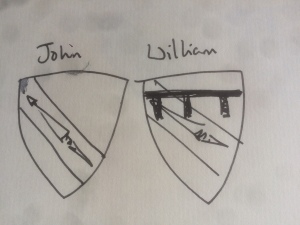 Dr Griffith also says that perhaps Shakespeare didn’t want to use his arms because it was a bit controversial for an actor to have them, let alone show them off. William Dethick, Garter King at Arms, was later criticised (by Sir William Segar, the herald and portrait painter) for granting arms to ‘base persons, viz Shakespeare the player’ – wrongly since they were granted to his father Mayor of Stratford. But a simpler argument would be that a coat of arms would make the identification too explicit. It isn’t ‘a portrait of Shakespeare’ it is a figure of poetry inspired by Shakespeare. A nod to those in the know, like the portrait of Diana Mitford Lady Mosley as the Muse Polyhymnia in Boris Anrep’s mosaic on the National Gallery steps, where the classical figures are based on the artist’s Bloomsbury friends.

When Dr Griffith says that Shakespeare must have been working as a propagandist for Lord Burghley it’s conceivable. If – as he suggests – Shakespeare was helping Gerard with the text of his book, then there should be some beautiful passages to prove it. And there may be. By this time I was dreading the security guard’s ‘Are you going to buy that?’ A sign of my age. No one asks that any more.

I am willing to believe the argument’s conclusion, even though I might query some of the working. I certainly believe that Shakespeare was charismatic and famous enough by this date that he could well have helped with Gerard’s project. And the rebus under the figure must have some bearing on the identity. I certainly agree there. In that context, Shakespeare is a plausible solution to the puzzle. The most persuasive evidence for me, however, are the initials WS which the book’s Elizabethan owner has dreamily scrawled over and over again in the margin around the figure.

Dr Griffith incidentally casts doubt on the Chandos Portrait, undated but clearly painted in Shakespeare’s lifetime. I don’t find the likenesses incompatible. If the Herball figure is Shakespeare his rounded nose could have been straightened. Painters often superimpose an ideal mask on their subjects, even (or especially) if they’re good-looking. I often wonder how many Kirk Douglas chins there were in circulation c.1700 compared with the number that appear in portraits of the time.