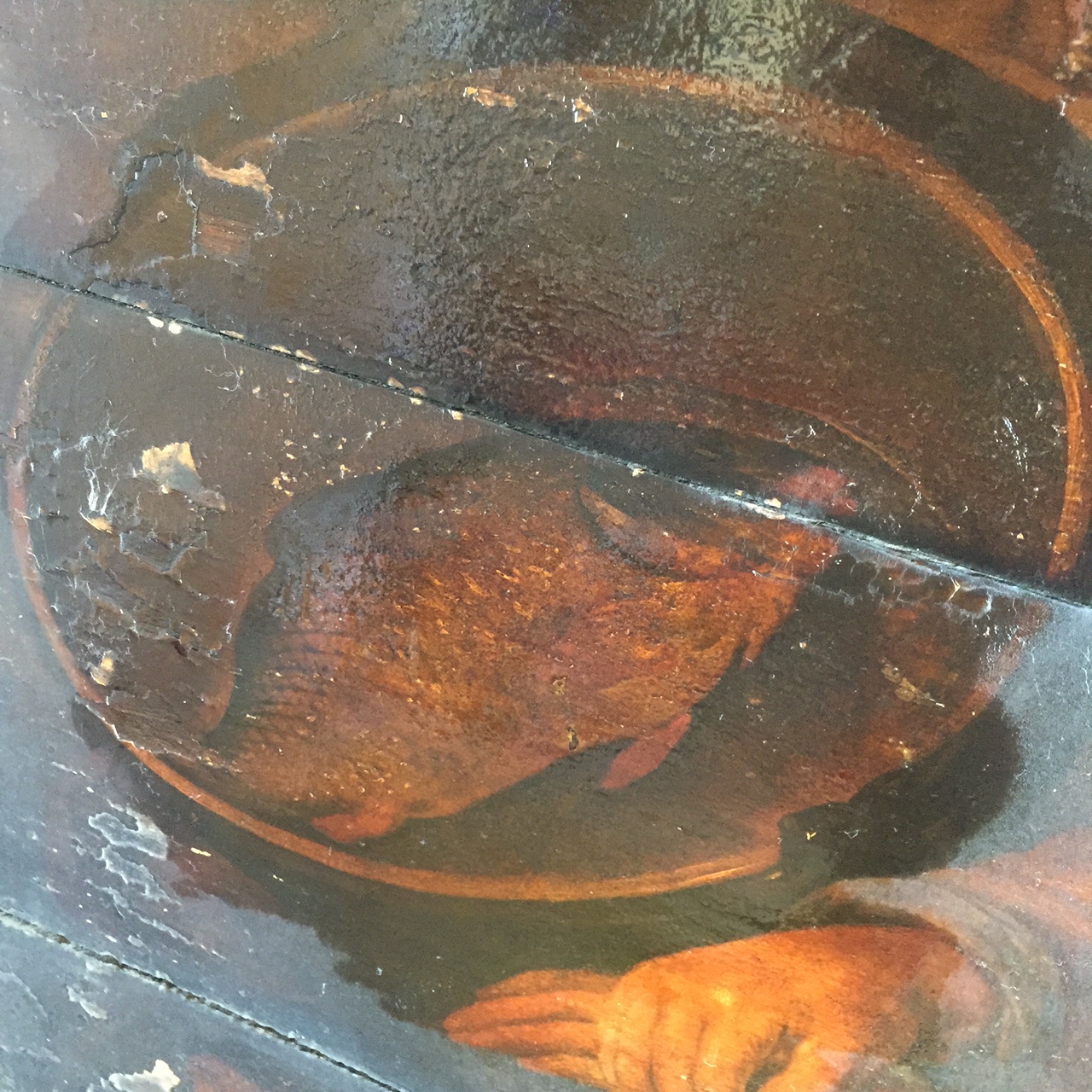 Last time, I mentioned this large painting we bought at Sheffield Auction Gallery on Friday. 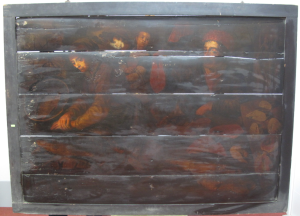 I thought it was painted c.1570 and close to Pieter Aertsen (1508 – 1575), the father of Netherlandish genre and still-life painting. It is extremely dark and dirty. But with white spirit rubbed over the surface some depth and detail began to emerge. 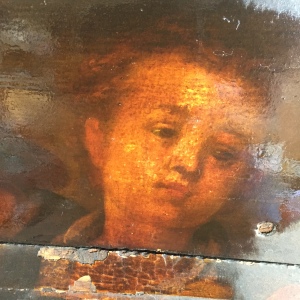 Like the face of the woman with the basket,

the carp in a bowl,

and a fishing boat being unloaded by a bridge in the background.

‘The Fish Market’ was clearly a popular composition in its day. I tracked down a small oil on copper copy, called ‘School of Aertsen’ which sold at Drouot in Paris (June 7th 1972 lot 42), and Dad found three other life-scale versions.

A copy on canvas, dated c.1590, on loan from a private collection to the Bonnefantem Museum in Maastricht, was described as ‘after Joachim Beuckelaer’. Beuckelaer (c.1533 – c.1573/4) was Aertsen’s nephew and artistic heir. He is famous for kitchen and market scenes, including The Four Elements acquired in 2001 by the National Gallery.

This painting at the Palais Rohan in Strasbourg is attributed to Beuckelaer himself and dated 1568.

The hints of detail in the background of our painting started to make sense. The codfish in the foreground are still hard to see. But we could just make out the flatfish hanging on the beam to the right, and the curious figure in red moving up the stone stair in the background. Oddities began to make sense: the notched shape on the trencher at the bottom of this detail

proves to be the tail of one of the mackerel on a trencher. The other fish are also dimly there, including the pike beneath the woman’s hands.

I can’t wait to see how it cleans.

A further version attributed to Beuckelaer was at auction with Bailly-Pommery & Voutier in Paris (June 20th 2005 lot 43). Like ours, this was painted on a panel made up of long planks. But the composition was cut off directly below the top of the trencher, and the dimensions of 89 x 161 cm suggest that it is missing the bottom plank of the panel. The Strasbourg painting measures 119 x 165; ours is 115 x 161.5 cm.

So far so straightforward. On present evidence our painting is one of three versions of identical scale and support; apparently contemporary and probably by Beuckelaer or his studio. But there is a further twist. Elizabeth Alice Honig (Painting and the Market in Early Modern Antwerp 2001) suggests that this composition is not the work of Beuckelaer himself, but an unknown follower. Beuckelaer, Dr Honig says, typically employs a dual narrative, with a religious episode in the background of his genre scenes, as in the National Gallery Four Elements. Nor, she says, is he so crudely suggestive as The Fish Market. The leering fishmonger with his finger through the vaginal-shaped fish-fillet is just a step too far for Beuckelaer. But it is worth saying here that the Strasbourg painting also employs a dual narrative; the heavily-laden fishing boat being unloaded in the background represents the Miraculous Draught of Fishes, and the three figures still in the boat are Christ, sitting between SS Peter and Andrew.

Equally, thanks to Dad’s eagle eyes, the Strasbourg painting is signed with a monogram JB beneath the shellfish on the table at the right.

Cleaning will reveal whether this mark in the same place on our painting is also Beuckelaer’s monogram.

The recent history of our painting seems equally exciting. It belonged to Harry Francis Constantine (1919 – 2014), director of the Sheffield City Art Galleries and the Mappin Gallery, a painter and pioneering collector of modern British Art. Several lots in his posthumous sale last week fetched high prices, including £64,000 against a £100 – 200 estimate for a Vision of the Shepherd catalogued as ‘manner of Giovanni Francesco Castiglione.’ According to his obituary in the Guardian, Frank Constantine, as he was known, made some remarkable acquisitions as museum director, and is described as a very astute buyer indeed:

“Frank spotted acquisitions in the sale rooms and in deserted corners of commercial galleries that others missed… [He] found paintings at the bottom of the market that he knew should be at the top, and indeed would now be unobtainable for a regional art gallery without huge fuss and effort. It was this open eye, this ear to the ground, that made Frank so admired.”

Frank Constantine specialised in modern and Victorian paintings, however. The collection at auction also included work by Frank Constantine’s father, George Hamilton Constantine (1878 – 1967) who was also a painter. He may have passed on a talent for buying to his son, so the stock of old masters could well have belonged to him. Father and son were both trained restorers. UV-lighting shows signs of recent overpaint (in the last 50 years) strengthening the lines between the fingers of the woman on the left, and around the arm and basket of the woman in the middle. The exploratory ‘porthole’ clean of the head belonging to the woman in the sun-hat may belong to this period. Or may be earlier. Perhaps these paintings were worked on by them both as restoration projects. It’s clear though that The Fish Market was only partially explored. It will be a fascinating piece of ‘archeology’ to reveal it completely.