Twenty-some years ago when I was first starting out in this business, freelancing for a year after I’d left Bonhams, I was asked to research this rather beautiful painting. 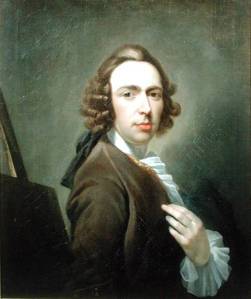 It was clearly a self-portrait c.1740, but whose? It wasn’t Richard Wilson, as it had been described, it wasn’t Francis Hayman, despite a feel of St Martin’s Lane and – although it ended up being catalogued as such – it turns out not to be the young William Delacour (c.1700 – 1767), seen here in an authentic self-portrait of 1765 in Edinburgh.

Delacour, a Rococo decorative painter and fashionable stage designer was part of the St Martin’s Lane art scene before he moved up to Scotland. He was also a portraitist, and judging from examples on file in the Heinz Archive at the National Portrait Gallery he deserves to be better known for this today. But he wasn’t the elusive subject of our self-portrait, although he must have known the man who was.

I’ve always been niggled by this painting, so you can imagine my delight all these years later, in the age of the internet and one-click attribution, to come across this etching in the NPG collection when I was browsing their website to research Benjamin Wilson (1721 – 1788).

What a superb self-portrait – and how incredibly handy of him to etch his own painting.

Wilson’s other portraits don’t have this rather Continental gloss; he was a great admirer of Rembrandt, and by the 1750s he introduces Rembrandtesque effects of chairoscuro, where sitters stand in dramatic light against windows. With Hogarth’s encouragement Wilson established himself as a fashionable portraitist while Reynolds was still in Italy. Wilson’s modern style remained popular after Reynolds returned, and his sitters included David Garrick and Benjamin Franklin. Like Franklin he was interested in the science of electricity. He eventually gave up painting for science, and was made a Fellow of the Royal Society.

I wonder what he would think of such a superb painting being mistaken for the work of another artist. Perhaps he would be rather tickled by it. He had a wicked sense of humour. I read in Ellen Miles and Jacob Simon’s Thomas Hudson catalogue of a trick he played on Hudson his neighbour in 1751. According to John Thomas Smith (Nollekens and his Times, 1828), Wilson was annoyed that Hudson had outbid him for a Rembrandt drawing at a recent auction. So he decided to get his own back. He made a copy of Rembrandt’s etching Landscape with a country lane and cottages and slipped it into a portfolio lot of genuine Rembrandt prints that Hudson had bought from a dealer.

Hudson was delighted with Wilson’s print, and said that it was by far the best of Rembrandt’s work. Wilson then invited Hudson to dinner to celebrate, also inviting Hogarth, Hudson’s friend Samuel Scott the marine painter and – rather unfairly – John Joshua Kirby, a fellow artist and writer whom Hudson loathed. The main course was brought in, and to Hudson’s horror it was a sirloin of beef stuck all over with skewers bearing copies of Wilson’s forged print. Scott called out, ‘A sail! A sail!’ and Hogarth and Kirby collapsed in hysterical laughter. Hudson was not amused, and Wilson published the etching with an explanatory note:

A proof print from this plate designed and etched by/ B: Wilson was sold as a very fine Rembrandt/ to one of the greatest Connoisseurs for Six/ shillings, the 17 April 1751

If Hudson was taken in it’s testament to Wilson’s skill as an etcher, and to his feeling for Rembrandt. I don’t think it’s at all embarrassing. Certainly less embarrassing than me missing an engraved self-portrait. But then, Hudson would probably enjoy the fact that for twenty years at least, Wilson’s most sensitive painting was attributed to anyone but its real artist. I reckon they had a lot of fun, those St Martin’s Lane painters. Like the time three years before when they all went off a trip to Calais, and Hogarth got arrested.

William Hogarth ‘The roast-beef of Old England’ Calais Gate 1748 (c) Tate Britain. In the background at the left Hogarth is sketching the gate, oblivious to the halberd of the Watch, and a hand about to grab his collar. He was then briefly detained as a spy.

One thought on “Righting an old wrong: Benjamin Wilson’s earliest self-portrait in oil.”