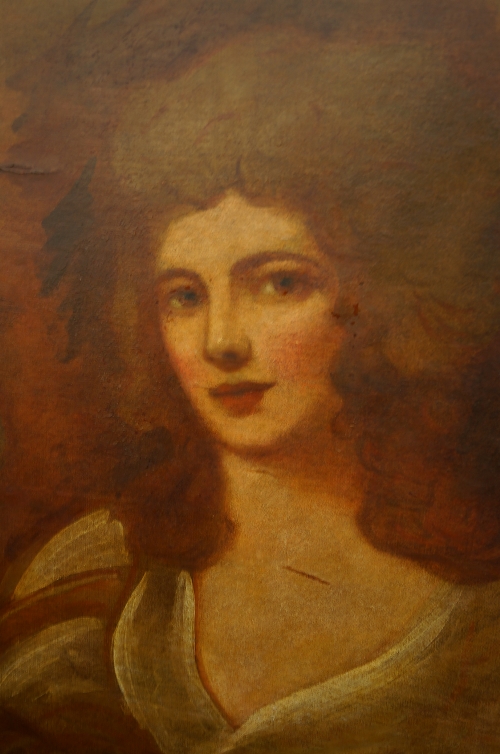 This past month there were two paintings we bid on and didn’t buy. The first one was this small portrait at Rowley’s of Ely in February, oil on canvas 12 x 10 inches. An old label on the back said Lady of the time of King George II but it looked more like one of Mary Beale’s portraits ‘in little.’

I like to have a go for uncatalogued Beales when we can. We covered the upper estimate ( £400) plus a bit. I would love to own it myself, but as a commercial option it’s trickier. An attribution to Beale wouldn’t be transformative enough for putting it back into auction – you might still be looking at a c£800 lower estimate. I don’t have a shop where she can wait, temptingly, for someone to fall in love with her at four figures. Highly covetable tho she is. 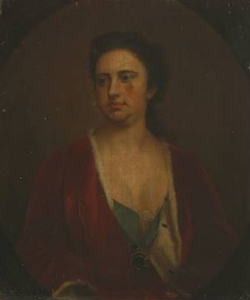 Then at the beginning of this week, this painting of Sarah Ley Mrs Tickell, the Society beauty and serial Romney sitter,  sold at Rosebery’s (March 24th lot 552) for £9,840 against a – from memory – £300 – 500 estimate. It wasn’t a sleeper, as it was catalogued in full with a family provenance, and the frame must be worth at least £3,000 on its own. I love unfinished paintings, that sense of seeing the artist at work as though you’re looking over his shoulder. 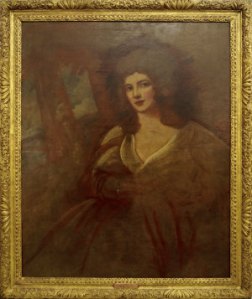 The face in the close-up I was sent looked softer than I’d expect, so I wonder if the features have been prettified by overpainting.

The Classic Serial on Radio 4 Extra at the beginning of this week was The Picture of Dorian Grey. Appropriately, because I’ve been thinking about the stories this past month of painters secretly putting the boot into their sitters in their portraits. Nelson Shanks says that a mysterious shadow in President Bill Clinton’s portrait commissioned by the Smithsonian, is an allusion to the Monica Lewinsky affair. He hung a blue dress against the light as he worked the painting up in his studio. And Mark Roscoe has gleefully owned up to putting a diagram of a long-tailed tit in Bill Oddie’s portrait, because he thought the sitter was ‘really awful.’ I think this is all rather deplorable. I liked Bill Oddie’s good-humoured response, and he’s quite right about the painting.

Newspaper reports of ‘That dress’ and Titgate tried to set Shanks and Roscoe in a great tradition, stretching back to the skull in Holbein’s Ambassadors. But Holbein’s skull has nothing to do with it. It isn’t about pricking his sitters’ pomposity, digging the viewer in the ribs and whispering, ‘Who do these two think they are then?’ Holbein is expressing his patron Jean de Dinteville’s own philosophy: Who do any of us think we are? De Dinteville would have agreed with Antoine de Chandieu’s La Vie est luisante et belle, written later that century: life is like ice, glittering, beautiful, fragile; you fall through ice into water; through life into death. In The Ambassadors Holbein is saying the same thing. Or more shockingly he is saying the reverse, death erupts into life.

Even Daphne Todd, brilliant portrait painter and now judge on BBC’s Big Painting Challenge, gets in on the act, admitting on Radio 4’s Today that she once painted devil’s horns on the forehead of an ‘obnoxious’ young man who kept her waiting when she had travelled miles and miles in the small hours to paint him. This is certainly extremely rude of him and it must have made her blood boil. But in Oscar Wilde’s story, Dorian Grey murders his best friend, blackmails another into getting rid of the body, and causes countless men and women to kill themselves, which he later laughs about. Compared with that I’m not sure that being ‘really awful’, ‘obnoxious’ or even not-having-sex in the back of a limousine is enough to mark someone in their portrait for all eternity.

I prefer Gainsborough’s answer to a tricky client. In Joseph Farington’s Diary he describes how the painter Francis Bourgeois visits Gainsborough’s studio:

‘where he saw a half-length portrait and was struck with the haughty expression of the countenance, and observed it to Gainsborough, who expressed satisfaction at the remark, as it proved He had hit the character. Gainsborough said it was a portrait of Mr Pitt, who He said came the day before to sit for his picture, and on coming into the painting room sat down in the Sitter’s Chair, and taking out a book began to read. Gainsborough, struck with the hauteur and disrespectful manner of Mr Pitt treated him in this way.- He took up his palette and seeming to be trifling among his colours, began carelessly to hum, toll, loll de roll, on hearing which Mr Pitt recollected himself, shut his book and began to sit in the proper manner.

‘Gainsborough was very familiar and loose in his conversation to his intimate acquaintance; but knew his own value; was reserved and maintained an importance with his sitters, such as neither Beechey nor Hoppner can preserve.’ 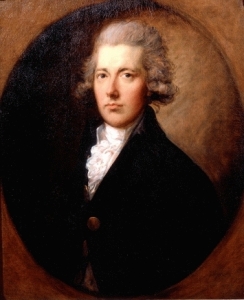 This portrait of Pitt is Gainsborough’s prime version. In which case I wonder if the hauteur that struck Bourgeois so forcibly was toned down a bit as Gainsborough worked it up, particularly if he and Pitt got on rather better in subsequent sittings. Every painting has been many things in the process of its creation, and the final face we see is an overlay of all these other other phases. One of the reasons why freezing it as a sketch is often so enlightening.