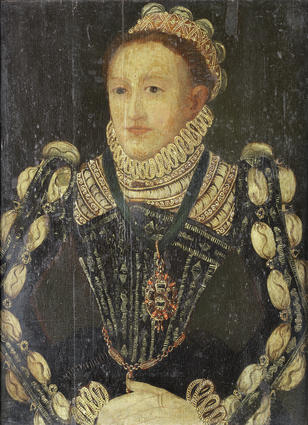 This week I was interested by this small panel portrait (Morphets of Harrogate, March 5th lot 277), catalogued as a portrait of Thomas Cromwell. It was called Manner of [=’later than’] Holbein. But the dimensions of c.14 x 11 inches are a standard English size as early as the mid-Sixteenth Century, and the severe, linear characterisation and intense narrow eyes seem typical of early English painting. 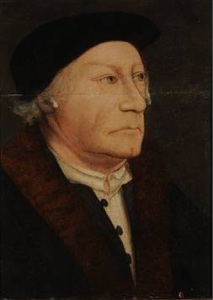 The sitter is in fact George Neville Lord Bergavenny (c.1469 – 1536), Tudor courtier and magnate, and seriously old money at King Henry’s Court. The Nevilles were shakers and movers of English history – Richard Neville Earl of Warwick was Warwick the Kingmaker – and in the person of the Marquess of Abergavenny they are one of the last medieval families to survive today, with their wealth and status undiminished.

(c) The Earl of Pembroke

The prime source is this drawing by Holbein in the collection at Wilton, which Holbein used for his miniature of Lord Bergavenny in the Victoria and Albert Museum. But the source for the panel portrait is probably some further, intermediate likeness. You’ll see, by the way, from the inscription on the Wilton drawing that the confusion between Lord Bergavenny and Thomas Cromwell is an old one. The two men do look very alike.

If this painting does turn out to date from the 1530s – something for the lucky buyer to find out – it is a rare surviving example of early English portrait style. There’s a ghost of biblical Saints and Patriarchs in the face; you can imagine that the artist was trained painting rood screens in churches.

I like these early portraits which seem to have a foot in both camps, looking back to English late Medieval art, and forward to the portrait workshops of the mid-Sixteenth Century. They remind you that while Court art evolved in sudden leaps under great names like Torrigiano, the Horenbouts and Holbein, the currents of native English art moved more slowly. It absorbed elements of the new styles, but expressed them in continuity with the older tradition.

The Reformation of the mid-1530s onwards was the end of most ecclesiastical patronage, and artists shifted their focus. Portraiture had already been fashionable at Henry’s Court by 1520; now it became the dominant art form.

This period, c.1530 – 1555, is sandwiched between the worlds described in two excellent books, Roger Rosewell’s Medieval Wall Paintings (2008) and Tarnya Cooper’s Citizen Portrait (2012). The names of the men – and women – who were working throughout these periods often survive, but only occasionally can we attribute specific works to them. Brother John Wodecroft painted the Choir of Bury St Edmunds Abbey around 1300, and John Exeter, Richard Lincoln and John de Cambridge were responsible for the paintings in St Stephen’s Chapel at the Palace of Westminster in the mid-14th Century. But the works of Agnete the Paintress, taxed in Winchester in 1285, may forever be a mystery. Similarly, we know the work of Esther Kello, the Scottish painter and calligrapher who worked in London in the 1590s, but what did Abraham Allaway paint in Stratford upon Avon before his death in 1624?

At both ends of the period, native talent often felt threatened by foreign painters and under-appreciated by English patrons. Certainly the idea of the painter as ‘artist’ rather than as craftsman, was slow to catch on in this country, and well-travelled critics were more likely to be impressed by Continental names. Henry Peachum – supercivilised author of ‘The Compleat Gentleman’ (1634) – tried to give a more balanced view in his ‘Art of Drawing with the Pen’ (1606): some foreign artists, he said, were even worse than English ones. But the truth was that artists in England, even working below the level of the Court had always included painters from Flanders and the Netherlands, as well as elsewhere in Europe; and in the Middle Ages, English artists had been sought after in France and Spain.

One thing seems clear: the world of painters was a small one, whether in the tight-knit community of London and the Painter-Stainers Guild, or in the provincial towns. Tarnya Cooper says that between 1500 and 1620, only thirty nine men, English and foreign, were described as painters in wills proved by the Consistory Court of Canterbury, the criterion for which was an estate worth at least five pounds. But the lack of connecting documents makes it virtually impossible to link names to works, and so we cannot establish an individual style for these painters or build them an oeuvre.

We can sometimes assemble sets of paintings from the same workshop, and further discoveries might one day give their creator a name. 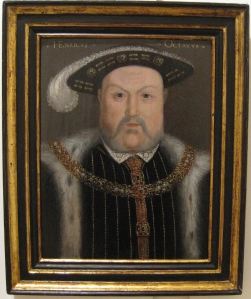 A friend of mine bought this small panel portrait of King Henry VIII at Christie’s South Ken a couple of years ago. It is a version of Holbein’s Whitehall Palace portrait, updated to the 1540s by making the King’s hair and beard grey. Interestingly, there are another two versions of this type in the files of the NPG Archive, one identical except for a pinky-brown background and the other extended to three-quarter length. All of them feature the same inscription and style of lettering.

It’s speculation, but this suggests to me that they are a pattern produced by a single workshop, and available in a range of sizes depending on the client’s pocket and wall-space. A panel this size – 14 x 11 inches like the portrait of Lord Bergavenny – would have been relatively cheap. Pictures could be valued as low as 5 shillings in inventories. And though the retail price would be higher this must represent the sort of picture that the average middle-class Tudor family would have bought to hang in their half-timbered house – perhaps the first painting that a family owned. Henry must have stared down from many of his subjects’ walls, and making his image widely available was part and parcel of his rule.

The documentation that would describe how people went about buying these paintings is still missing – the idea of choosing sizes, were they commissioned or off the shelf? – but it must surely exist somewhere. We know how the more expensive ‘long gallery’ portraits were reproduced. This three-quarter length portrait of Sir Henry Sidney is attributed to Arnold Bronckorst c.1566; the paper head pattern traced from it would then be copied to produce further accurate versions both within the master’s studio and beyond. 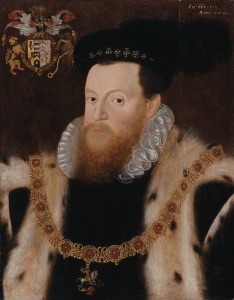 With the less sophisticated, more popular works the process is less clear, but the Henry portraits I’ve mentioned suggest that a workshop might produce its own interpretation of a popular image. This painting of Queen Elizabeth was bought as an unknown lady from Bonhams in 2012 (Private Collection, Warwickshire). 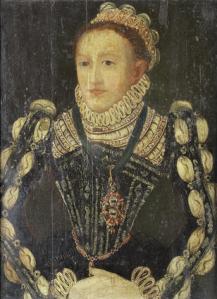 It derives ultimately the ‘Northwick Park’ portrait type of 1565. The prime example is now known to be the full-length formerly with Philip Mould and Co., which was attributed by Bendor Grosvenor who rediscovered its artist, Steven van Herwijck, as the Holbein of Elizabeth’s Court. Van Heerwicjk’s face-type was reproduced precisely by his workshop, and examples survive in several collections, including of course the version formerly at Northwick Park. 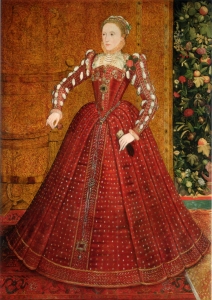 The Warwickshire painting is descended at a further remove from the original. The costume is richly-worked and it is a beautiful, luxury item, albeit a more provincial one. If Henry’s portrait was bought off the easel then this portrait of Elizabeth is more likely to have been commissioned, the artist’s interpretation of the official Court pattern. So far I have found no other examples of this exact type, but this is not surprising. Paintings rarely survived for long outside the collective security of country house and college sets. Cooper quotes John Evelyn’s account of portraits of Queen Elizabeth I being used as boards to put loaves in the bread ovens of Somerset House in 1662.

We are some way from understanding how art patronage, production and buying worked at the more popular end of the Tudor art market. But every surviving example of it helps to build the picture, and I hope encourages an appreciation of these paintings as works in themselves rather than mere copies of their great originals. And they have an authority all of their own. The Petworth portrait of Thomas Cromwell c.1540 belongs to this category. Is a workshop’s copy with variations of Holbein’s original painted eight years before – note the shorter hair and exposed ears – or is it is a unique type? Either way it is a penetrating likeness of the great minister in the last years of his life.

Most importantly, this linear ‘traditional’ style triumphed over Continental realism later in the century. A lone painter like John Bettes continues Holbein’s realism and three-dimensionality, but too much realism was not what English patrons wanted; and for a wealth of reasons – well summarised by Tarnya Cooper – Elizabethan art turned back to medieval linearity.