Before Christmas I read Andrew Brown’s review of Elvis at the O2 (Telegraph December 13th 2014). You have to agree with him that Elvis Presley is the greatest entertainer of the Twentieth Century, ‘a cultural monument as significant as the Elgin Marbles.’

You could be more ambitious still. This week the International Union of Geological Sciences decreed that we are living in a new geological age. The Anthropocene, originally a sociological term for the age of industrial man, is now an official unit of geological time. They have decided that the Holocene Era – which until Monday I thought we were still living in – ended with the first atomic test at Alomogordo on July 16th 1945; that detonation marked the beginning of the Anthropocene Era. The twenty years between Elvis’s birth in January 1935, and the recording of That’s All Right (Mama) in July 1954, neatly straddle that Big Bang; Elvis, ‘the Atomic Powered Singer,’ and the bomb are contemporaries in a single shutterflash of geological time: future ages will say that the modern world was born of those two parents.

Later in his review Mr Brown describes his journey to Greenwich by water:

As we passed Traitors’ Gate at the Tower I thought of CJ Sansom’s brilliant detective story Dark Fire. His hero Shardlake is crossing the crowded river in a wherry when a piercing trumpet blast causes everyone to stop “as an enormous canopied barge painted in bright gold appeared, a dozen oarsmen in the king’s livery making rapid sweeps through the water”. The king is hidden inside the canopy with the curtains drawn. Everyone bows their heads and doffs their caps. In that brief scene you glimpse life under the tyranny of Henry VIII.

It is a fantastic image – like something from A Man For All Seasons – and the juxtaposition lodged Henry and Elvis together in my head.

It got me wondering; how do Henry and Elvis compare? If, that is, you take them both at their best. There will be plenty of time later, when I’ve seen a few episodes of BBC2’s Wolf Hall (begins Sunday 28th) to explore the darker dimensions of Henry’s character. For now Henry is the Young Lion, not the savage old man-eater – the man Christina of Savoy said she would happily marry if only she had two heads – and Elvis is not yet the tranked-up ghost of those last years in Vegas.

Certainly they both had an eye for the ladies, and a love for the finer things in life; Elvis lived in regal state at Graceland and when the Beatles were granted an audience with him, John Lennon described it as being bowed into the Presence of the Sun King.

Like Elvis, Henry was also a genuinely talented musician; he sang and played the lute, harp, lyre and horn. According to Kinney and Swain’s Encyclopaedia of Tudor England (2001) there are 45 known compositions attributed to him, and a further three masses and a three-part motet as-yet untraced. This is an impressive catalogue for an amateur. He didn’t write Greensleeves, which is based on a Spanish tune from thirty years after Henry’s death, but his Pastime with Good Company, written for Catherine of Aragon in 1513, was a hit throughout Europe. The French composer Jean Richafort paid Henry the supreme musician’s compliment by borrowing the tune; he took the top line and slowed it down for his De Mon Triste Deplaisir. You can listen to Pastime with Good Company performed here by the New World Renaissance Band. I like Owen Phyfe’s plangent, reedy tenor; Mark Smeaton must’ve sounded like this singing to Anne Boleyn, before everything went pear-shaped. ‘The King’s Madrigal’ is still recorded today; there are 122 different versions on iTunes, and at the folk end of the rock spectrum it’s a favourite of artists like Jethro Tull. I like this wild version performed here with pagan relish by Blackmore’s Night who – symmetrically – have also covered Elvis’s Can’t Help Falling In Love.

As I was mulling all this over I found this interview with Damian Lewis, who is playing Henry in Wolf Hall. The context is Lewis’s own experience of aggressive mood swings after he concussed himself in a motorbike accident. He relates this to the change in Henry’s character after he was knocked unconscious for two hours in a fall at jousting in 1536. This is a good argument: I’ll save discussing it for later.

I think we all have an understanding that Henry was a womanising, syphilitic, bloated, genocidal Elvis character.

‘But in the period I play him he had a 32in waist and was much taller than anyone else. His beautiful pale complexion was often remarked on.

‘I found that the grandiose, more paranoid, self-indulgent, self-pitying, cruel Henry emerged in the period after [the King’s jousting accident].

Lewis’s physical comparison is an obvious one. Henry was a few inches taller than Elvis but in later life they could have worn each other’s clothes quite comfortably. It’s also important, as Lewis points out, that Henry, like Elvis, was a sex symbol when he was young – and, again like Elvis, still going strong into early middle-age. Henry was 45 when his jousting accident turned him into a near-invalid. Elvis was 38 in 1973 when his divorce spiralled him into irreversible prescription drug abuse; his come-back Vegas gig in 1969 is one of his greatest performances. This eyewitness account captures the raw appeal and sheer beauty of Elvis still in his prime:

[Elvis’s] style and panache that come close to pure magic. Lithe, raunchy with the sweat pouring down his face, he now moves with the precision of an athlete, the grace of a dancer, flamboyant and flashy, sexy and self-mocking, he moves with the instincts of a genius to give poetry to the basic rock performance.

This echoes what the Venetian Ambassador Giustiniani wrote of of Henry in 1519, even to the image of him sweating through his tennis shirt:

His Majesty is twenty-nine years old and extremely handsome; nature could not have done more for him.  He is much handsomer than any other sovereign in Christendom; a great deal handsomer than the king of France; very fair, and his whole frame admirably proportioned.  [He] has now a beard that looks like gold.  He is very accomplished, a good musician, composes well, is a most capital horseman, a fine jouster, speaks good French, Latin, and Spanish; is very religious…
He is extremely fond of tennis, at which game it is the prettiest thing in the world to see him play, his fair skin glowing through a shirt of finest texture…

This portrait painted a year later gives a sense of Henry’s muscular handsomeness.

Googling Henry VIII portraits I came across this homoerotic fantasy by Kirill Fedeyev, probably the most extraordinary image of an English King. 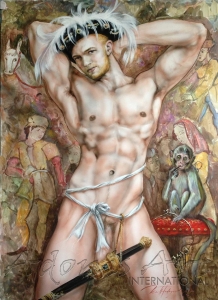 This painting, based on Baroque Martyrdoms of St Sebastian, might owe more to the success of Showtime’s The Tudors than Henry’s contemporary reputation as an Adonis, but there is a serious point here. We instantly recognise the subject of Fadeyev’s painting because we all know what Henry VIII looked like. Henry succeeded in turning himself into an icon.  His portraiture projected his image into his subjects’ daily lives, a symbol of authority that must’ve become as familiar to them as their own face, creating an Orwellian sense of omnipresence.

Henry and Elvis are both creator figures: the religious reforms begun in Henry’s reign define England’s sense of itself as a nation, which continues to this day, particularly in our relation to Continental Europe; Elvis invented, or ‘conducted’ that amorphous set of values and beliefs we instinctively recognise as ‘modern’. It’s no surprise that both of them have been portrayed as messianic figures. Andrew Brown writes that ‘The curators don’t try to sell Elvis to you. They assume you already accept the doctrine that he is the King of Rock and Roll.’ [my italics] Little Richard said, ‘Elvis was God-given, there’s no other explanation. A Messiah comes round every few thousand years, and Elvis was it this time.’ John Lennon said in an echo of the Book of Genesis: ‘Before Elvis there was nothing.’ In this context, a postcard I once owned showing Elvis as Christ of the Sacred Heart makes perfect sense.

Henry too was painted as a biblical hero, as King Solomon and King David, as well as an icon in England’s mythology; the Winchester Round Table casts him as his ancestor King Arthur, England’s once and future King. For now I’ll leave you with the apotheosis of Henry’s personality cult, not the Whitehall Mural, but this less well-known group portrait. Here in Holbein’s King Henry VIII presenting a Charter to the Barber Surgeons c.1545 the King is enthroned, like a Christ in Majesty, surrounded by kneeling figures who resemble the donors flanking a Saint in an altarpiece. Elvis said, ‘I am not the King. Jesus Christ is the King.’ In asserting his authority as Supreme Head of the Church of England, Henry was more forthright. The inscription in Holbein’s portrait says that the King is proxime a Christo – ‘next after Christ.’