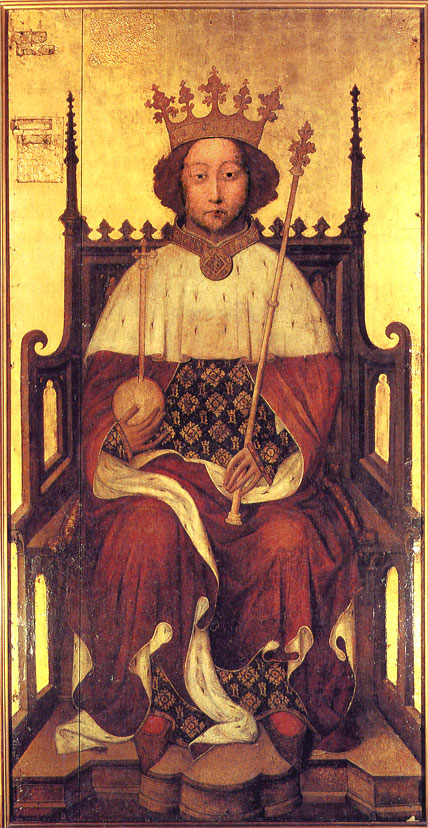 The subjects of this week’s three posts – King Richard II; the Prophet Mohammed; Elvis and King Henry VIII – feel a bit like the answers to a question on Radio 4’s Round Britain Quiz. ‘And the link is… ?’ In each case a portrait has become an icon, imbued with a power beyond merely telling you what the sitter looked like.

This Tuesday was Epiphany, the 12th Day of Christmas and the Feast of the Three Kings. It is also the birthday of King Richard II. I’m a fan of his because – whatever else happened in his reign – he was our first art-loving King and his patronage produced the Westminster Abbey portrait and the Wilton Diptych both c.1395. These are paintings as good as anything painted on the Continent at the same date, 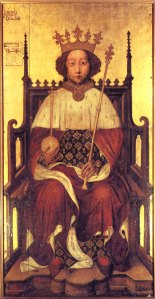 (c) The Dean and Chapter of Westminster Abbey

The Westminster portrait, painted larger-than-life in oil on panel, is the earliest surviving easel portrait in England, and there is nothing in Europe at this date to compare with it. The likeness agrees with Richard’s contemporary tomb effigy, and his portrayal in manuscript illustrations. This is the first time we have a complete sense of what a King of England really looked like.

Richard’s reign began well. In 1381 he dealt with the Peasants’ Revolt with a characteristically Plantagenet combination of quick-wittedness, personal bravery, expedience and ruthlessness, all at the age of fourteen. The English knew where they were with a King like that, and felt safer for it. But by the 1390s he seemed to be getting rather out of touch. Richard had been King since he was ten; it was the only life he knew, and in time he began to have a more exalted view of himself than the King of England’s traditional role as warlord and the Barons’ first-among-equals. Richard liked to be called ‘Highness’ and ‘Majesty,’ and according to the Eulogium written after his deposition:

‘After this on solemn festivals when by custom [Richard II] performed kingly rituals, he would order a throne to be prepared for him in his chamber on which he liked to sit ostentatiously from after dinner until vespers, talking to noone but watching everyone; and when his eye fell on anyone, regardless of rank, that person had to bend his knee towards the king …’

The Westminster portrait conjures the atmosphere of these crown-wearings, as if they were a rite in worship of the King himself. And in the Abbey, where it has always been, it would remind viewers of representations of Christ the Judge, such as this early Fifteenth Century example from Holy Trinity, Coventry. It was a potent icon, whose superhuman scale and conception expressed Richard’s conception of his own divine majesty. 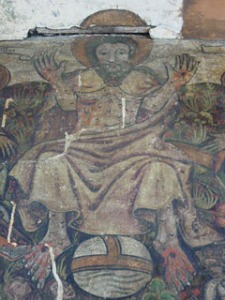 The Wilton Diptych painted in tempera on a miniature scale; when the two hinged panels are closed it measures only 21 x 15 inches. It was made as a portable altarpiece to go with the King on his progresses, and it is an intimate, private object with a highly personal iconography. It shows Richard not as he was when it was painted in the 1390s, but as he looked back in 1381, the finest hour of his kingship, when he calmed the rebels at Smithfield, riding fearlessly towards them shouting: ‘You shall have no Captain but me!’ As if commemorating this moment when Richard came of age and seized his Kingdom for himself, Christ hands the King a banner of St George, with a painting of England in the finial. The message again is clear: Richard’s rule is divinely-ordained, and Richard himself is mystically more than human. 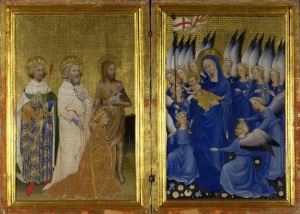 Richard’s side of the Diptych with his three Patron Saints presenting him to Christ and the Virgin – whose angels wear Richard’s White Hart livery badge – reminds you of the Three Kings at Christ’s Nativity; and this finds another echo in Richard’s own birth, which was attended by the Kings of Portugal, Castille and Navarre.

Richard’s self-identification with Christ, and the way it must’ve gone down with the more traditional faction at Court, makes me think of Woody Allen’s Apology, a send-up of Plato’s Apology of Socrates:

Simmias: The senate is furious over your ideas for a Utopian state.

Allen: I guess I should never have suggested having a philosopher-king.

Simmias: Especially when you kept pointing to yourself and clearing your throat.

Richard’s Barons might have put up with a King who wanted to be Jesus, if he had also been muscular and warlike. But Richard was not a warrior. He made peace with France in 1386, and under terms of the French King’s choosing. Richard married Isabella, a French Princess who was only six at the time. Richard’s first marriage to Anne of Bohemia had been childless, so the kingdom faced a wait of about ten years for an heir. This was a frightening prospect in itself, but the cultural tone of Richard’s circle was even less encouraging. Court literature extolled the imitation of Christ’s chastity, even within marriage (JM Bowers: Chaste Marriage, Fashion and Texts at the Court of Richard II) and the King impaled his arms with those of King Edward the Confessor, the chaste, and in some traditions virginal, Royal Patron Saint. The writing was on the wall. Forces were mustering against Richard, and for another century and a half no King would portray their own authority in such exalted terms and religious language.

In the National Gallery the Wilton Diptych is displayed on a midriff-high plinth in the middle of a room in the Sainsbury Wing. Last time I was there I waited til the room was empty, then went and knelt in front of it. I had to see it from the same angle that Richard would have seen it, set up on a table in his chamber, carried with him by his household from castle to castle in the last years of the 1390s, to Ireland and back, and through Wales, as the news got worse and Bolingbroke got nearer. Alone in the gallery, looking up at the Diptych I tried to see it – through Richard’s eyes – resting on thick figured damask  with the flickering of candlelight reflected in wax-spattered gilt, and imagined him drawing strength from his painted self as his reign collapsed outside.