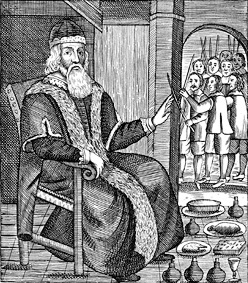 In the interests of research yesterday I bought these Lindt Chocolate Santas, (2 for £5 from Sainsbury’s). After we’d eaten one each, and felt slightly sick, we decided that we should’ve just shared one between us. The crucial point would’ve been made equally well by a before and after photo of the same Santa.

So here they are. Santa on the right, who looks more or less like Father Christmas, is holding a sack of presents in his right hand, and a teddy bear in his left. But stripped-down Santa on the left is a rather intimidating figure, with a bundle of sticks in his left hand, to beat or threaten naughty children with.

In the Alpine countries Santa even has frightening companions to do this part of his job for him, like the terrifying Krampus. This is a world away from his origins in the philanthropist St Nicholas of Smyrna, giving money to young women to save them from prostitution, so there must be a further pagan spirit even deeper within. 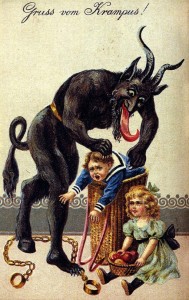 Santa in America, where the European cultural influence is equally important, is a fusion of the English Father Christmas and the traditional Continental St Nicholas, one inside the other like our chocolate Santas. And this may be why he has a slightly sterner edge in America that he has never had over here. The ‘watch out Santa’s about’ tone of  the lyrics of Santa Claus is Coming to Town (1934) – ‘so be good for goodness’ sake’ – hints at this. And episodes of two American cartoons, Futurama and American Dad, play with the idea of a vengeful, murderous Santa. It’s a joke, obviously. But it still sits oddly with our conception of Father Christmas, and makes more sense if there’s still a ghost of the Alpine sprite about him.

Britain got the gentler end of this merger of Yule spirits, and by the 1870s our Father Christmas had picked up Santa’s very generous practice of bringing Christmas presents. But what did he do before that?

I turned to The History of Father Christmas and Santa Claus for the answer. ‘Sir Christemas’ first appears in a Fifteenth Century carol by Richard Smart, Vicar of Plumtree in Devon. He brings the news of Christ’s birth and urges people:

Father Christmas really comes into his own in the Seventeenth Century, when he comes to the defence of the Stuart Christmas which was under threat from the Puritans. In 1616 Ben Jonson’s Christmas his Masque:

Enter Christmas, with two or three of the Guard.

He is attir’d in round Hose, long Stockings, a close Doublet, a high crownd Hat
with a Broach, a long thin beard, a Truncheon, little Ruffes, white Shoes, his
Scarffes, and Garters tyed crosse, and his Drum beaten before him.

Why Gentlemen, doe you know what you doe? ha!
would you ha’kept me out? Christmas, old Christmas?
Christmas of London, and Captaine Christmas?

Frontispiece to The Trial and Examination of Father Christmas (c) wikipedia

Josiah King’s Trial of Old Father Christmas, published 1686, was written shortly after Christmas had been reinstated as a public holiday. It is written as a Court report of Father Christmas’s trial by the Puritans; he is, of course, acquitted, to great rejoicing. The illustration shows a figure instantly recognisable to us as Father Christmas. This was clearly his standard appearance; fifty years earlier, Thomas Nabbes had described him as ‘an old reverend gentleman in fur-lined gown and cap’ in a masque of 1638.

This kindly figure, the personification of good cheer and celebration, remained largely unchanged for the next two hundred years, encouraging adults to drink deep, eat plenty and have a great time. Dickens’s Ghost of Christmas Present with his tables groaning with roasts and pudding is his direct descendant.

Frustratingly, though, there is no evidence what colour Father Christmas’s robes were in the Seventeenth Century. The Stuart sources are good on the archaic costume; Father Christmas is always dressed in the reassuring, old-fashioned style of their grandfathers. But they are silent on colour. And Dickens’s ghost wears green, to match his ivy garland. It would be wonderful to find some early evidence of red. The idea that Santa/Father Christmas didn’t wear red til a Coca Cola advertising campaign in the 1930s is wrong. You can see why this became such a popular theory. Throughout history, conspiracy theories makes the best memes, and the stubbornest to correct.

Telling your wordly-wise interlocutor, who has lifted the bonnet on the world’s workings, ‘Actually Santa wears red in Victorian Christmas cards on both sides of the Atlantic,’ doesn’t really cut it. If only you could say, ‘Mmm but Father Christmas was wearing red at the Court of King Charles I.’ The evidence is out there, I am certain.

Merry Christmas to you all!