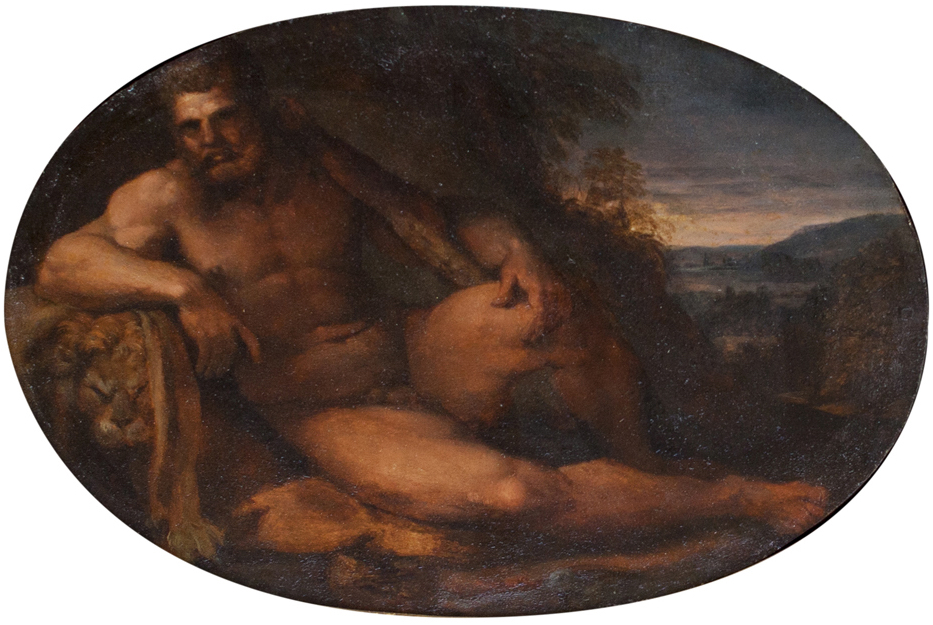 Dad had been watching the sale online, while I was at work, and on the phone that night he told me that the Hercules had gone sky-high. It had sold for £250,000. It was amazing. The bidding must have opened at about £1,800, so you can imagine what the atmosphere in the room must have been like as it went up and up and up. Zak and I saw this happen with a painting at Gorringe’s last year, and there’s a very palpable lightheadedness afterwards.

Dad asked me who it could be by. I have to admit that beyond thinking it was quite attractive in the catalogue,  I hadn’t really thought about its authorship. On second inspection I said it could be Annibale Carracci.

Annibale Carracci (1560 – 1607) doesn’t get the media attention of his contemporary Caravaggio, but he’s just as an important a painter, and equally central to the invention of Baroque style. With his brother Agostino and cousin Ludovico, he founded a revolutionary art academy in Bologna in 1582. They set out to reinvent painting. Italian art had become unrealistic and hyper-stylised. Mannerist paintings like Pontormo’s Deposition filled imaginary space with fantastic, attenuated figures. Decorative effect was more important than physical plausibility.

The Carracci wanted to take painting back to basics . They believed in accurate drawing and observation from nature.

The Butcher’s Shop 1583 (Christ Church Picture Gallery) is like a manifesto. The oddly-posed soldier reaching into his purse on he left is probably a joke ‘mannerist’ figure included as a contrast with the straightforward and realistic poses of the butchers. The Carracci family were originally butchers, and the picture – with the three painters as models – expressed their belief that painting was a job of work, like a trade, not an increasingly rarified profession.

Mannerism began with Michelangelo and the exaggerated proportions of his David, but the Carracci considered he was the last artist before the ‘Fall’. They admired the physical solidity of his style, and the fact it was grounded in life drawing. Annibale’s mature work blends Michelangelo’s sculptural presence with the gracefulness of Raphael.

Annibale’s greatest work was the painting of the Gallery at the Palazzo Farnese in Rome, 1597 – 1602. He was helped by his pupils, who included future Baroque greats like Lanfranco, Domenichino and Pietro da Cortona, and the result is a Michelangelesque monument, worthy of comparison with the Sistine Chapel ceiling. It broke Annibale’s health though, and his spirit. I’ve been told that when it was all finished, his patron Cardinal Odoardo Farnese deducted five years of expenses from the bill, leaving him with next to nothing. Annibale fell into a deep depression and died.

Back to Hercules. The first part of Annibale’s work for the Cardinal was producing paintings for an antechamber to the Gallery, the Camerino. These were based around the life of Hercules. The most famous is The Choice of Hercules 1596 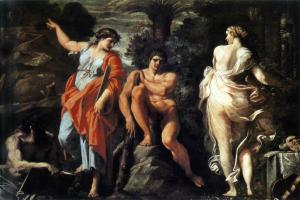 but the Camerino paintings also included a (very Michelangelesque) figure of Hercules Resting. This is the preparatory drawing for it, in the Cleveland Museum of Art. 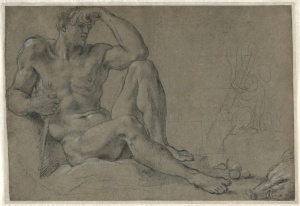 Now we are getting closer to understanding why someone might pay £250K for the Bonhams painting. And in his blog on October 31st, one of Dr Bendor Grosvenor’s readers sent in this image of a Carracci drawing that sold for £73,000 at Sotheby’s New York in 1998.

This would seem like irresistible evidence of a sleeper. The drawing reproduces – or predicts – the painting almost exactly, apart from the fact that the hand position has changed. Alterations like this are fat to the fire of one’s imagination – clearly the artist changed his mind between making the preparatory drawing and painting the final picture. The way that Hercules’s hand now grips his knee rather than disappearing behind the leg makes the pose more rhythmic, dynamic, like a strong man rousing himself from sleep. Etc etc.

I am indebted to Tim Williams’s blog ‘A Question of Attribution‘ for supplying another vital piece of evidence.

William Young Ottley, keeper of drawings at the British Museum and collector of Italian paintings had owned – and presumably from context and price (£21) this is an oil not the Cleveland drawing – a ‘Hercules reposing after his Labours, A study with some variation, for his Fresco in the Farnese Palace at Rome’ attributed to Carracci in his sale at Christie’s London May 25th 1811.

This is the icing on the cake. Ottley had visited Italy and acquired paintings from great collections there. Tim Williams speculates that the Bonhams painting may have been intended as a portable study to show Annibale’s patron the Cardinal; ‘setting aside,’ he says, ‘the possibility of there being another larger, lost Hercules Resting…

‘I would wager that it will resurface beautifully restored, and double the money at the TEFAF in Maastricht next year.’

Alas no. From here my soundtrack is the sinister Florentine dirge, the Canto dei Capi Tondi – ‘Don’t listen to happy people’ – that warned against optimism, even at Carnival time. With this in the background here are the chilling words of one of Bendor’s readers

Don’t wish to teach granny how to suck eggs… but re. your Hercules item: a high price against a low estimate surely does not necessarily mean it’s a sleeper.  In this particular instance I would call it “speccy alert”.  As we all know, many of them just die a slow and painful death… with bitter and twisted buyers. The real sleeper is the one that just ‘walks out’ of the saleroom – largely unnoticed.

As the Fat Boy says in Pickwick: ‘I wants to make your flesh creep.’

Because here is what appears to be Hercules Reclining, again, a year later, cleaned, but not on a stand at TEFAF for half a million, but on in Edinburgh at Lyon and Turnbull, for £2 – 3000 on November 27th. Here is the catalogue entry:

Shocking. You’ll see that at some point Annibale’s name has been written on the back of the picture, so – if this is the same painting – when the buyer’s restorer took the copper panel off its mount the first thing they saw would have confirmed their every hope. But after that…

The Lyon and Turnbull painting is a work of less quality than you would expect from Annibale, a much lazier picture than he would have painted – the modelling is perfunctory and there’s no sense when you compare the lion skin with Hercules’s leg that the artist is able to distinguish fur from flesh. The cataloguing ‘Manner of’ is the final killer, because this is shorthand for ‘a later painting in the style of.’

However, it’s very unusual to see something recycled so quickly. One normally struggles on for a few years or so, hoping scholars might eventually agree…

Anyway, I bet the underbidder at Bonhams is feeling somewhat relieved…

Undoubtedly so. The usual dealers’ maxim is ‘It’s not the pictures you buy that you regret, it’s the ones you miss.’ Not so here. But how unbelievable it must have been to be the vendor. Asking Bonhams to repeat the figure when they rang up for results. Refreshing their browser again and again when they looked up the sale on Bonhams website, just to be sure they weren’t imagining it. £250,000. A holiday of a lifetime; a house; dry-rot cured; leaks mended; business saved. Manna from Heaven.

And as for the buyer. I hope – if it is the same painting – that they’re not ‘bitter and twisted.’ That would be very sad. A quarter of a million would be a horrific amount of money to lose; but if this is the case I admire the way that they have put the painting straight back into sale, with the same attribution so there is no attempt to disguise what it was. It’s an honourable way to behave. The painting might otherwise have lingered, tantalisingly, in the literature, linked to the New York drawing and acquiring over time a spurious authenticity like Lieutenant Kije. I hope they know the auction house casino of old. Some you win; some you lose. And I hope they have other irons in the fire.

As for the Hercules. What is it then? Unless it’s a very clever outright fake, inspired by the 1998 drawing in New York, it might be a later copy of a still-unknown Carracci original. If I were a millionaire I would buy it as – in the words of Sir Anthony Blunt in A Question of Attribution – ‘an Allegory of Supposition.’

And there is still some ambiguity. I have been careful to say ‘if it is the same picture’, because at 23 x 33.3cm (9 1/16 x 13 1/8in) the Bonhams painting is an inch smaller. An inch is quite a lot. A mistake with the tape measure? Or two paintings? Curiouser and curiouser. I look forward to seeing what it goes for.