There is not much on at the cinema right now, but we are very much looking forward to Mike Leigh’s ‘Mr Turner’, which opens here on October 31st.

JMW Turner comes in an opposable pair with John Constable. You always end up being more of a fan of one than the other, and I have always been a Constable supporter. But back in the days when I was first discovering art, Mum showed me Turner’s ‘Rain, Wind and Speed’ 1844 (National Gallery) as an example of how dynamic and revolutionary an early painting could be. 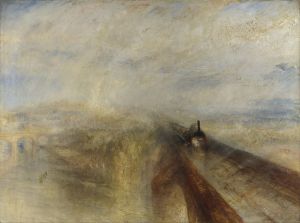 I hadn’t known that Spall learned painting for two years before he started filming. According to Ian Burrell’s article in the Independent on Friday (‘Timothy Spall is the real thing as a fake’), he studied with the painter Tim Wright. As Wright says:

“They are not pastiches of Turner: there are some paintings and drawings and watercolours that stand up on their own.”

Their unlikely relationship began when Leigh, who knew Wright as a fine-art teacher for theatre designers in London’s Drury Lane, arrived on the doorstep of the artist’s studio with Spall in tow and an explanation of a “mystery project” he had previously mentioned. “Mike said: ‘We’re going to do Turner!’ I had never done anything like it before.”

Spall’s art lessons began with the “basics”, as he attended Wright’s studios in Clerkenwell, London, for two days a week. “I quickly realised he was the sort of person who was going to be responsive and intrigued by the subject. He had an interest in art as well – no real training but he was certainly interested in Turner, obsessed by Turner,” said Wright.

“There are things that are very difficult but he was very tenacious. He never cut corners and was very diligent – it was quite impressive to see.”

This is terrific stuff, and it explains why his working in the trailer looks so very convincing. Especially the most famous episode in the Constable v Turner rivalry, the moment when Turner upstages Constable’s Opening of Waterloo Bridge just before the opening of the Royal Academy show in 1832. Turner’s seascape Helvetsluys was hanging right next to Constable’s painting. This painting of Dutch ships in choppy water was more tonally restrained than Constable’s glittering panorama. Turner was worried it might be overlooked, so he painted an eye-catching red buoy in the foreground swell. Constable came in, saw when he’d done and said: ‘Turner has been here and he has fired a gun.’

It was a stroke of genius, but to me it always feels like a point scored by the opposition in the last minute. Impressive but annoying. From the trailer I’m hoping that Timothy Spall will give me a ‘way in’ to liking Turner as a man. As he says in the film when considering HMS Temeraire as a future subject – another painting I love – ‘I shall cogitate upon it.’

The Turner/Constable argument is well summarised in this article by Jonathan Jones from the Guardian (Turner and Constable exhibitions revive Britain’s greatest art rivalry). I’m looking forward to seeing ‘Late Turner: Painting set free’ at Tate Britain this Autumn. You don’t have to choose one or the other. But as Jones says, the distinction between these two revolutionary geniuses, artists who single-handedly brought Britain into the front rank of European painting in the early 1800s, is one between realism and abstraction. It’s a matter of taste which one rings your bell. Applying Jones’s test, though there’s so much I love in both painters, I prefer Constable to Turner, Lucien Freud to Mark Rothko.

In the trailer, one critic assumes that Turner’s later abstract style must be a result of losing his eyesight. In fact, Turner’s eyesight was no worse than most people’s. I know this because I have looked through his glasses. Philip Mould has a pair that belonged to Turner, which were kept after his death, along with a magnifying glass, a snuff box and a card case, by his housekeeper Maria Tanner, who worked for Turner at his house on Tite Street.

This pair shows that Turner was short-sighted and slightly astigmatic. He would have used them for viewing at distance. Two further pairs for close-work belong to the Ashmolean Museum, who have put them on longterm loan with Tate Britain. Turner would presumably have painted using the long- and short-sighted pairs together, viewing the subject of his painting with Philip Mould’s pair, then switching to the Ashmolean pair to work on his canvas. I can imagine him with one pair on his nose and the other balanced on his forehead, the usual scenario in the days before bifocals. It makes me wish that Timothy Spall was a friend of mine, and I was trying to think what to give him for Christmas.

Thanks to the V&A’s superb ‘Constable: Making of a Master‘ – of which more next time – I am now seeing the world through Constable’s eyes. We were walking the dog at Shoreham yesterday, where the streets of cumulus coming over were just like the sky that Constable painted at Weymouth 200 years ago. 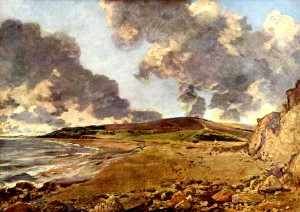