The news recently was full of giant spiders – how they are growing to vast size in the heat and will soon be wanting to spend the winter indoors. In the lock-up where I park the car every morning for work there is a huge spider living in the corner, and from the empty skins, one still in the web, she must have moulted twice in three weeks. 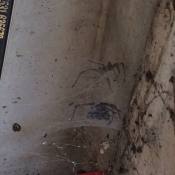 I took this photo two weeks ago. She is now really quite huge – these days it’s dark when I get to work, and when I shine a torch on her she’s significantly bigger now than the cast-off skin. If she stretched out her legs she might not cover a saucer but she would definitely overlap a beer mat.

I wondered whether she was a Cardinal Spider, a large Southern house-spider we didn’t get in Warwickshire where I grew up. If you look them up online you’ll find a story that they get their name from frightening Cardinal Wolsey at Hampton Court. This story is now the only version repeated online, with variations – the Daily Mail (‘Invasion of the spiders‘ September 6th 2011) adds to the mythos by saying that Wolsey was bitten by one.

Is this true though? Cardinal Spiders are much commoner in North Africa and Turkey. They are largely unknown outside the South East of this country and have long been associated with Hampton Court. This chimes with the other story I read ten years ago – that they were brought to this country in the carpets that Wolsey imported for his luxurious new palace. That makes sense. Only the other day I heard on the radio about an Asian mosquito that has been imported to Britain from India in car tyres, where it lays its eggs apparently.

The earliest reference I’ve found online to the Cardinal Spider is in Earnest Law’s ‘History of Hampton Court Palace in Tudor Times‘ 1885:

At this point… tradition demands, perhaps that we should notice the legend of the ‘Cardinal Spider.’ This enormous insect, with its fat reddish-brown body and its long jointed hairy legs, often attains the size of five inches in width; and when seen crawling about a bedroom at night will startle even persons of tolerably composed nerves. It is alleged to be a kind of spider peculiar to Wolsey’s palace and in some mysterious way connected with his disastrous fate, to be destined for ever to haunt the scene of his former greatness. Such is the story. The fact, however, is that this supposed unique specimen of the arachnida is well known to zoologists under the name ‘Tegeneria Guyonii or Domestica’, a species which though certainly found in extraordinary abundance in the old nooks and corners of Hampton Court, is yet not unknown elsewhere in the valley of the Thames.

Law is not quite right here. The Cardinal Spider isn’t T. Domestica, the (relatively) smaller house-spider we’re more used to further north. It is Tegeneria Parietina, its own species. But he is right about its distinct distribution, Hampton Court and the Thames Valley leading from it.  In Law’s time, T. Parietina was found in the Eastern Mediterranean and around Hampton Court, the home of carpetmakers and England’s great carpet importer.

They may have moved further afield in this country since. So if the spider in the lock-up is T. Parietina, then it is a direct descendant of stowaways who came to England in the 1520s in Cardinal Wolsey’s carpets. I shall raise my hat to her.

But what about the idea of Wolsey being frightened by his spiders? Online, from the Daily Mail to the Natural History Museum this story is now repeated as truth. I’m sure it’s a traditional story, but I can’t help thinking that it’s more influenced by a popular idea of Wolsey – like Terry Scott in Carry on Henry – rather than the truth, where I reckon Wolsey was pretty hard-boiled. 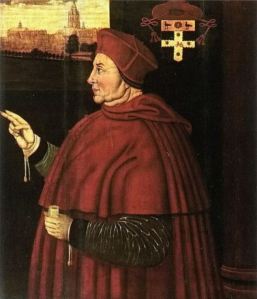 Wolsey’s real attitude I am sure would have been more like that of Charlotte Barker, intern at Hampton Court, who describes a day of rooting under the floorboards of the Cumberland Suite at Hampton Court – ‘Spiders and Star-flowers at Hampton Court‘ February 14th 2014 – when she found this:

Just as I thought I should pop off to lunch, I pressed my face to floor to have one last look under a wall. That’s when I found it. Something large, something carved, and something (Cardinal spiders be damned!) I had to get. I slid my hand under, and then my whole arm disappeared into the wall to pull out this beauty of a find.

This moulded plaster star-flower is the only surviving piece of an elaborately decorated ceiling in the Duke of Cumberland’s Bedchamber. Designed by William Kent in 1732, the ceiling was completely destroyed by fire in 1952.

Having found a unique piece of history, lodged in a wall, it shows that the past is still out there waiting to be discovered…. 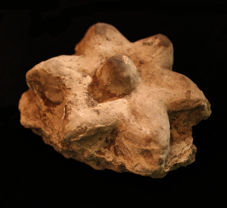 And as Charlotte Barker says, ‘ you should get on with work no matter how big the spiders are.’ Wolsey would have agreed.

I can’t find an illustration of Kent’s interior online, but ‘William Kent: Designing Georgian Britain‘ at the Victoria and Albert Museum this summer probably covered it. I missed the exhibition but I’ll have to see if it’s in the superb-looking exhibition catalogue.

Later – a friend of mine commented about the Cardinal Spider:

I’m pretty sanguine about spiders, but I think if I saw on of these on my duvet then even my “tolerably composed nerves” might falter.

I had to admit:

My composure is an act of will. When we were staying in a farm caravan for lambing a while back a spider made me jump back so fast I nearly knocked Zak unconscious with my elbow.