This morning’s Matt cartoon in the Daily Telegraph is quite funny. 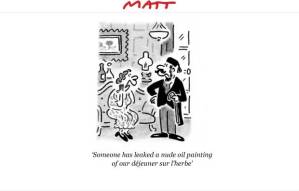 It refers of course to Edouard Manet’s scandalous Déjeuner sur l’herbe, rejected from the Salon in 1863 and exhibited instead at the Salon Des Refusés, the alternative venue established by Napoleon III when he realised that the cutting-edge art rejected by the Salon was actually more interesting. 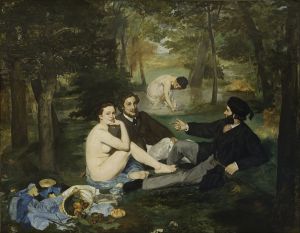 Manet’s painting was shocking because it was obviously set now. If you took out the young men in suits the painting could be a homage to Giorgione or Titian, classical, safe and respectable. The modern, clothed figures immediately gave the whole scene a sexual charge. Not goddesses but prostitutes. It was a revolutionary painting.

Manet’s painting is at the Musée D’Orsay in Paris, but there is a half-size preparatory version at the Courtauld Institute in London. It’s well worth seeing. 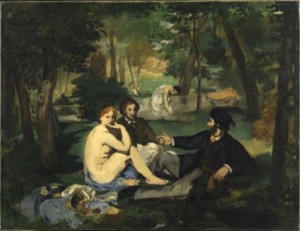 As for nude photos of celebrities. I am sorry that their privacy has been invaded, by a hacker or – as it seems now – a glitch in their server’s security. But as Jeff Goldblum’s character says in Jurassic Park, there’s no such thing as an infallible system. It’s like John Lennon said: ‘Anything that’s written can be read.’