I heard on the Today programme yesterday that Professor Donald Olson, a leading astrophysicist at Texas State University, has established the exact time of day when Claude Monet (1840 – 1926) painted his 1872 study of the port at Le Havre.  Impression, soleil levant (Musée Marmottan Monet) was shown in 1874 at the studio of Nadar, the photographer, as part of an exhibition of thirty progressive painters, including Degas, Renoir, Cezanne, Morisot, Sisley, Pissarro and Boudin. 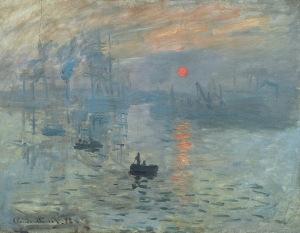 Louis Leroy wrote a review in Le Charivari which he called Exposition des Impressionnistes taking his inspiration from the title of Monet’s painting, which he compared to wallpaper. Leroy meant to be rude, but the artists liked the term – it described exactly what they were trying to achieve – and they adopted it for themselves. Impressionism was born, and Prof Olson has now established that this first (publicly-recognised as) ‘Impressionist’ painting captures the view of the port at Le Havre at precisely 7.35 am on November 13th 1872. Prof Olson describes the process of his discovery in an essay to the catalogue for an exciting-sounding exhibition at the Musée Marmottan.

The roots of Monet’s Impressionism go back to his time as an art student in Le Havre. In 1856 the sixteen year-old Monet met Eugène Boudin (1824 – 1898) sketching on the Normandy beaches. Boudin painted on the spot sketches of shipping and coastline. Boudin’s big influence was his friend Johan Jongkind (1819 – 1891), who also became a mentor of Monet. Jongkind made rapid on the spot watercolours of marine landscapes, which he would work up in the studio as finished oils. Boudin took this further by making oil sketches on the beach, and this business of painting ‘en plein air’ rather than in the studio, became a defining element of Impressionism. Boudin also painted very Constable-like little sketches to record the sun and weather. Constable’s sketches, incidentally, were far better understood and appreciated in France during the mid-nineteenth century than in England.

Impression, soleil levant owes a clear debt to Boudin. Monet painted a series of Le Havre maritime subjects in the preceding decade. He sent one of these, Navires sortant des jetées du Havre to the Paris Salon in 1868. It was met – by mainstream critics – with complete incomprehension. Wildenstein’s Monet catalogue raisoné describes the painting as whereabouts unknown – I remember thinking how lovely it would be to find it – but Gary Tinterow (Origins of Impressionism Metropolitan Museum of Art 1994 p.428) says that Monet destroyed it himself, presumably in frustration at responses like this cartoon:

The cartoon is the only surviving record of Monet’s composition.

The caption – suggesting that like the steamboat, Monet’s rapid painting is rushing to beat the clock – may be first time anyone made the made the old joke that I heard on the Simpsons recently. In Raging Abe Simpson and His Grumbling Grandson in “The Curse of the Flying Hellfish” (Fox 1996) Mr Burns grabs a cache of looted paintings off Bart at gunpoint, telling him to hurry up: ‘Time is Monet.’ How wonderful that people were making this joke even before Monet was famous.