This Friday I went to ‘The First Georgians: Art and Monarchy 1714 – 1760‘ at the Queen’s Gallery, Buckingham Palace.

I’ve been looking forward to this show since I first heard about it. It is incredibly good value for money. The £9.95 ticket gives you unlimited re-entry for a year, if you remember to get it stamped when you leave, and you can buy the 480 page hardback doorstop of a catalogue (Rufus Bird, Wolf Burchard, Kate Heard, Kathryn Jones and Desmond Shawe-Taylor) for a very reasonable £30.

The politics of the period are largely absent from the show – no galleries of statesmen – and you appreciate the Hanoverians as much as a family as a Constitutional entity. The influence of the women of the family is particularly strong, with the formidably intelligent and multilingual Electress Sophia, who would have become Queen of Great Britain if she had lived two months longer

and with King George II’s wife Queen Caroline – described by Voltaire as ‘an amiable philosopher on the throne’ – who continued Sophia’s Court tradition of intellectual patronage. This watercolour of c.1819 by Charles Wild shows the library that William Kent was building for Queen Caroline in 1737, the year she died.

Caroline is now beginning to receive the credit she deserves for her encouragement of arts and learning. Caroline Crampton writes in the New Statesman this month about ‘the queen who brought the Enlightenment to Britain’ and a new book by Joanna Marschner ‘Queen Caroline: Cultural Politics at the Early Eighteenth Century Court‘ examines chapter-by-chapter Caroline’s patronage of painters, architects, poets and gardeners. She was, as Lucy Worsley in her BBC series accompanying ‘the First Georgians’ describes her, ‘the user-friendly face’ of the Hanoverian Monarchy, and the perfect, foil for her loving but abrupt and irascible husband. If, like me, you are a veteran re-reader of Lord Hervey’s Memoirs you will know that she also managed the Government. Caroline and the Prime Minister Sir Robert Walpole found it easier to sort business among themselves, involving the King as little as possible. As my Grandmother would say, a trouble shared is a trouble doubled.

King George II was a soldier, and in his love of Handel he had a soldier’s taste for stirring music. He was the last English King to lead his troops in battle, at Dettingen in 1743 – and he had fought bravely under the Duke of Marlborough at Oudenarde in 1708. His son the Duke of Cumberland succeeded him as Commander-in-Chief in 1745, and a sizeable gallery is devoted to their campaigns. This includes the Duke’s handwritten orders for the Battle of Culloden in 1746 – with a hasty correction scrawled on them as he reacted to the Jacobite army’s deployment in front of him – as well as a remarkable series of maps and battle-plans, meticulously drawn by the Duke’s draughtsmen on campaign. The Duke’s German engineer and draughtsman Schultz (d.1749) is known only from his surname but his circular fisheye panorama of the landscape and encampments viewed from the church spire at Dieghem in 1745 is a masterpiece. 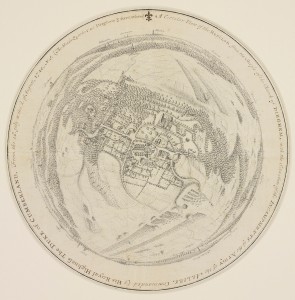 Another of the Duke’s draughtsmen was Thomas Sandby RA, who made a drawing of the opening of Culloden, with Highland skirmishers in the foreground. His large watercolour of Windsor Great Park with Virginia Water, looking north, c.1753 – 1760 is hauntingly beautiful. Thomas’s brother Paul was a soldier in the Duke’s army at this period. Both would become leading figures in the art Establishment later in the century. The exhibits are powerful reminders that artists and Princes shared the dangers of the firing line in this period.

Later the exhibition recreates a palatial hang – with a panoply of grand Old Master painting Rubenses, Gaspar Poussins and Claudes – but the gems for me were paintings like this compositional study by John Wootton (1682? – 1764), showing the Duke of Cumberland with two officers, possibly Lord Henry Campbell and Sir John Ligonier. 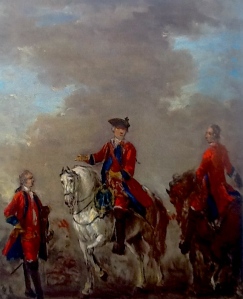 Wootton was a successful horse painter and topographical landscapist to the Prince of Wales. There are several examples in the show of his large and formal subjects, but they didn’t have the life and the light of this rapid little sketch. In the flesh the left eye of the chestnut horse is just dotted in. The horse seems to be looking back at you, a beautiful bit of observation from a painter who knew horses; it is a touch that brings it to life, in contrast with the Duke’s grey, whose pose and proportions are a deliberate echo of horses in Van Dyck or Rubens.

William Hogarth (1697 – 1764) is well represented in the exhibition. There was some work I haven’t seen before. This tantalisingly unidentified subject was once called Susanna and the Elders, but is now considered to be a Procuress scene. Quite possibly, but I do wonder if it’s a study for an unrealised Old Testament history painting. 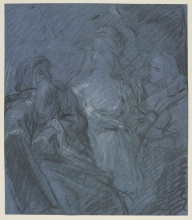 Hogarth and the early Georges did not real ‘get’ each other, however, and his work doesn’t appear in the Royal Collection until King George IV and Queen Victoria began to collect him. The Family of King George II c.1731 – 32 is a lively composition sketch, but the portrait was never realised, and the sketch was acquired by HM the Queen in 1955.

Hogarth’s contemporary Marcellus Laroon(1679 – 1772) is represented by two painting, both conversation pieces. The Dinner Party c.1719 – 1725 was presented to King George I in 1725, according to the inscription on a preparatory drawing. Laroon is a fascinating artist, a former soldier and – probably – actor. The paintings in the exhibition are both illustrations of Georgian High Life, but Laroon’s other paintings can be rather mysterious, as if they illustrate a play we haven’t seen. 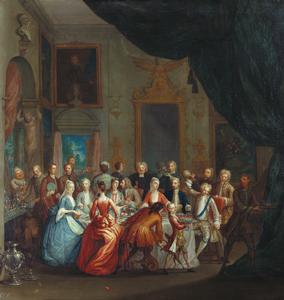 Laroon’s Noblewoman’s Levee c.1740 shows an otherwise unknown contemporary equestrian portrait in the background, and like the superb portrait of King George I by John Vanderbank (1694 – 1739) in the exhibition, it shows that the early eighteenth century was capable of Vandyckian grandeur.

By this point I was at the two hour mark and already had to be somewhere else (as now I must walk the dog and go to work in a minute). The gallery included examples of Queen Caroline and her son Frederick Prince of Wales showing avant-garde taste in collecting works that weren’t especially admired at the time – but are highly regarded now. Thomas Howard Duke of Norfolk and Sir Henry Guilford by Hans Holbein (c.1497 – 1543) were bought by Queen Caroline, and the Interior of a Farmhouse with figures (‘the Jealous Husband’) by David Teniers (1610 – 1690) that was part of a Teniers set that Fredrick hung in his house at Leicester Square. Teniers particularly was considered the most unimproving painter and very ‘low’ art.

Before I left I learnt the rather remarkable fact that English Grand Tourists would stop their carriages at the point in the Roman Campagna shown in Claude’s View of Rome with the Ruins of Maecenas’s Villa and view the landscape through special tinted ‘Claude glasses’ that made it look like the painting. Extraordinary. I wonder if any survive. I also got down on my hands and knees to look under the seat of a fantastic great carved and gilded Kentian armchair by Henry Williams. In case one suddenly crops up miscatalogued in a provincial furniture sale I ought to know what it looks like. Like a heavily carved frame, in fact, where the blind-side is still roughly chiselled out of the wood, like the beginning of a sculpture, but even the bottom was gilded.

The exhibition strikes a wistful note only twice. We learn that King George I loved Kensington Palace the best of all his residences, because the formal gardens there reminded him of the gardens he had left behind at Herrenhausen. And in a passageway off a cabinet of Hanoverian portraits there was a small group by Pierre Mignard of the family of King James II in exile, with Queen Mary of Modena and Prince James Edward and Princess Louisa Stuart. Prince James Edward, born Prince of Wales, was pointing at a crown on a cushion, the closest he ever came to wearing it. They were set against a brilliant Mediterranean sky with an Italianate palazzo in the background, sunny but glum, a postcard from a family who have gone on holiday by mistake. If King James II had learnt the same lessons from his hard-knocks upbringing as his brother King Charles II did, he need never have gone away. The Stuarts’ loss was Hanover’s gain. As this exhibition shows, it was Britain’s gain as well.

Now I look forward to a quiet few days to read the catalogue. And going round the exhibition again.