Last February, a medieval skeleton was discovered in a Leicester car-park. Just as everyone was celebrating the discovery of our last medieval King, Bendor Grosvenor raised some important objections to calling it King Richard III. That’s to say; if the skeleton is identified as King Richard by mitochondrial DNA, surely the same affinity would be observed in any female-line descendant of a common female ancestor. Of whom there must have been a few around at the time and place. 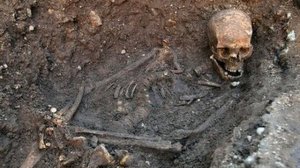 This March, Martin Hicks of Winchester University and Martin Biddle of the Winchester Research Unit also queried the DNA evidence and the accuracy of radio-carbon dating. They say the question of identity should be judged by a Coroner’s court. That same month, the Plantagenet Alliance, a pressure group including some of Richard’s descendants, persuaded the Ministry of Justice to call a Judicial Review to decide where the bones should be reburied; lucratively in Leicester, or in York as the King himself had wished. Vanessa Roe, head of the Alliance, interrupted proceedings at the Judicial Review to say that a human casualty of war had become an archaeological specimen.

She is quite right. This human dimension seems to have been lost. And I will bet my last silver sixpence that you could test the bones and judiciate til Domesday and never prove categorically that they were or were not the bones of Richard Plantagenet. Better to treat them as you would a painting, whose identity might never be proved to the crucial standard of academic validity; skeleton of a soldier, possibly King Richard III (1452 – 1485).

You have to hold two simultaneous viewpoints, one in the wholly objective Court of Academic Evidence – is there even the slightest chance that this could be the skeleton of any other person? – and the other in the subjective tribunal of your own head. And there I believe that this is indeed the skeleton of King Richard III. The skeleton’s slight scoliosis persuades me. John Rous (1411/1420 – 1492) the Warwick historian wrote two ‘Rous Rolls’, illustrated histories of the Earls of Warwick during Richard’s lifetime, one in Latin and one in English. The Latin roll refers to Richard’s ‘inaequales humeros, dexter superior, sinisterque inferior,’ his uneven shoulder, the right higher than the left. Richard had acquired Warwick Castle by his marriage to Anne Neville, daughter and co-heiress of Warwick the Kingmaker, and had visited Warwick in the interval between his two coronations, so this description is compelling.

Horace Walpole cites Rous’s account of Richard’s appearance in his ‘Historic Doubts on the Life and Reign of King Richard III’ 1768, one of the earliest works to review the evidence of Richard’s appearance and character. I shall have to see what he says about the treatment of the King’s body after his death. Bendor queries the fact that the skeleton’s wrists seem to have been bound from the way they are placed together over the pelvis. He argues this makes it more likely the body belonged to a prisoner executed by beheading.

I disagree. Polydore Vergil, Henry VII’s historian writing in his Anglica Historia 1503 – 1513 describes how ‘Richard’s naked body was slung over a horse, its head, arms and legs dangling.’ Perhaps the wrists were tied at this point, but other accounts directly support the idea of the wrists being bound. Robert Fabyan states in his Chronicle that:

‘He was trussed behind the pursuivant called Norroy as an hog or other vile beast, and so all besprung with mire and filth was brought to a church in Leicester for all men to wonder on and there lastly irreverently buried.’

Fabyan’s Chronicle is dated 1533 here, but he died in 1512, so his life is contemporary with events. His account take us right up to the moment that the body is dumped in the grave and makes the pose of the skeleton – ‘irreverently buried’ – all the more expressive.

Walpole’s ‘Historic Doubts’ mentions a story that reminded me of something a friend of mine said a quarter century ago:

I liked that, a sort of country-house brain-teaser to show that even the very distant past is only just over the horizon. Like the fact that the last woman in England whose father had been born in the eighteenth century died when I was three.

The other day I realised that ‘My Grandmother Says’ – like King Richard’s hunchback – might be based in fact. Walpole says: ‘The old Countess of Desmond who had danced with Richard declared he was the handsomest man in the room, apart from his brother Edward, and very well made.’ Katherine Fitzgerald Countess of Desmond died in 1614, by some accounts at the age of 140. No doubt impossible to prove – some sources say that Lady Desmond was only 100 – but completely fascinating.

It’s a great shame that my own Grandmother died three years before the skeleton was discovered. She would have been delighted, and sure it was Richard’s. She was a great supporter of his, and convinced that he didn’t kill the Princes in the Tower. Here she is on the right as Richard Duke of York in her first season at Stratford. Richard III was played by Alec Clunes, Father of Martin. The Company was planning to go on tour to America later that year, 1939, but events intervened.

Certainly there is no beyond-reasonable-doubt evidence tying Richard himself to the deed. In 1984 Channel 4 staged The Trial of King Richard III, before a retired judge, with eminent counsel and expert witnesses including Pamela Tudor-Craig and David Starkey. A jury of members of the public found the King not guilty.

The earliest contemporary account of the Princes’ disappearance is Domenico Mancini’s ‘De Occupacione Regni Anglie per Riccardum Tercium’ ‘the seizure of the Throne of England by Richard III’. Mancini was an Italian doctor who was in England from 1482 – 1483, and wrote his account for the Archbishop of Vienne, one of the counsellors of King Louis XI of France. One of Mancini’s sources was Dr Argentine, one of the last people to see the young Edward V alive. Mancini reported that the Princes had disappeared under suspicious circumstances, and by 1483 the rumour at the French Court was that Richard had murdered them.

This is again one of those questions we may never get to the root of. There have been so many suspects, all with a claim to the throne once the Princes were dead: Richard III, the Duke of Buckingham, Lady Margaret Beaufort and Henry VII. Perhaps the most important fact is that whoever actually killed them, no one had an interest in keeping them alive. Even those who had no personal claim to the throne might remember the words of Ecclesiastes 10:16 ‘Woe unto thee O Land, when they King is a child.’ As Richard Hipshon says in ‘Richard III and the Death of Chivalry’ they might look back at the preceding sixty years of war, begun in the unstable minority of the boy-king Henry VI and think that a Kingdom might be saved for the loss of two lives. A sad thought, that makes the Princes seem all the more lonely.

Perhaps the only positive thought to take from this is that Richard III’s reign marks the moment when political murder stopped being something the law and the country winked at. Shakespeare’s Richard is a monster because he murders the people who are in his way. That’s the birth of a strikingly modern viewpoint. Before Richard III, plenty of Kings and Princes were murdered for political reasons, and plenty of their subjects too; their deaths might be avenged, legally or otherwise but the moral right was with the last man standing. Edward II, Richard II and Henry VI were all murdered in a way that would be impossible after 1485. Moral progress was slow perhaps; King Henry VIII dealt with the last Plantagenet heirs by a kind of judicial murder, executing them on fabricated charges of treason, but at least it was understood that things had to look legal. Secretary Davison may have suggested that Mary Queen of Scots could meet with an accident, but Sir Amyas Paulet her gaoler would not ‘make so foul a shipwreck of my conscience, or leave so great a blot on my poor posterity.’ And although Queen Elizabeth had other cousins whose claims to the throne made her uneasy during her reign – Lady Mary and Lady Catherine Grey, and Arbella Stuart – she did not have them murdered. Imprisoned for the rest of their lives, yes, but not murdered. It was no longer done.

3 thoughts on “King Richard III, Horace Walpole and my Grandmother; and the Tudors invent the modern conscience”