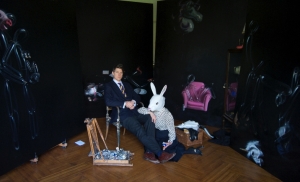 This morning I had an email inviting me to the exhibition of nominees for the Catlin Art Prize 2014,  at Londonewcastle Project Space in Shoreditch.

My friends Phil and Khloe Cath, who work as Mr & Mrs Cath, have been nominated, and I’m looking forward to seeing their new stuff. Mr & Mrs Cath graduated from Goldsmiths last year and have already been causing quite a stir. For me their work was the highpoint of a very strong Degree Show. Zavier Ellis, the director of Charlie Smith London, included them in his exhibitions ‘The Future Can Wait’ in October last year and ‘Young Gods’ this January. In an interview in October with The Other Art Fair he says:

‘I would urge people to look at Mr & Mrs Philip Cath, who I saw for the first time this year when doing my rounds of graduate shows. The make monumental paintings that are intelligent, knowing, technically superb and at once affirmative and ironic. I boldly predict that they are destined for great things.’

Suvi Lehtinen of ArtFetch described their work in Young Gods as ‘strange and alluring… Weird, but in a good way.’

As Charlotte Cripps says in the Independent,  the Caths’ work is stunning for the degree of labour and ingenuity that goes into it. Their paintings are elaborate allegorical tableaux that pay respect to Old Master subjects and compositions – their Degree Show included a set of Deadly Sins – but reinterpret them through the prism of the Cath’s rather surreal imaginations.

Their life-size Art Of War 2011 (c)Leslie Collection shows the allegorical figure of Painting riding triumphant in the Battle of the Arts, a typical Cath metaphor for the time-old debate: which is the greatest of the arts? 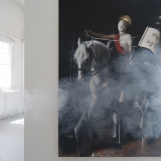 It looks dreamlike and imaginary, as if a pre-Raphaelite had mated with a De Chirico. And it is. But it is also a meticulous still-life painting of a real installation; each element is posed from real elements crafted by the artists, so that every painting is also a record of a sculpture. The sheer work involved is breathtaking; the mummy-like figure was posed by Mrs Cath; the banner was made by Mr Cath even down to the embroidery of the battle-honours, just visible in the painting, and the horse itself was created from tens of A4 photocopies of a Lippizaner. These sheets of paper have been shown exactly, and the horse has a strange double aspect, at once a flat paper mosaic and at the same time real, solid and snorting about to ride out of the canvas. In Seventeenth Century Seville, the painters used to tell the sculptors that however realistic a statue might be, it only came to life when it was coloured by a painter. The Caths’ Art of War makes the same point.

The Caths’ paintings for the Catlin Art Prize exhibition develop the technique they explored in the Deadly Sins, with paintings of balloon figures, again formed and posed beforehand as sculptures. 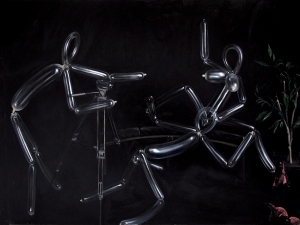 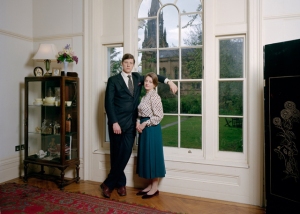 Their Catlin Prize exhibition is a series of paintings called Eve’s Progress, with a nod to William Hogarth’s Rake’s Progress. They chart the attempts of Eve, the feminist heroine, to navigate the numbing tragicomedy of modern life, pornography, and machine-induced soullessness. These paintings are a hymn to ‘the faceless souls of data collection and the economic units of an increasingly post human reality.’ I’m sure they’ll be treated with a good dose of typical Cath wit and we’re hugely looking forward to seeing them.