I’ve been looking into Thomas Hudson and his pupils, and a reader has just told me about a very interesting reidentification of a late work by Joseph Wright of Derby (1734 – 1797). Wright is one of the two ‘names’ to have studied under Hudson. The other, of course, is Sir Joshua Reynolds.

Just as Warwick Castle celebrates its 1100th Anniversary, the art historian Adam Busiakiewicz has identified this 1787 landscape Moonlight with a Lake and Castellated Tower (Private Collection, Canada) as a view of Warwick Castle with Caesar’s Tower. 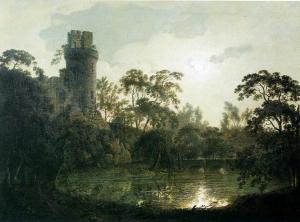 Canaletto’s 1748 Warwick Castle from the South Front shows the same view with the mill, and the houses of Mill Street that have been omitted by Wright to create a more picturesque composition. For this reason I wondered if it was a capriccio based on a further painting.

Mr Busiakiewicz considers a more exciting possibility, and wonders whether research might unearth a link between Wright and the Earls of Warwick. This is very likely. George Greville 2nd Earl of Warwick (1746 – 1816) was a great collector and patron of British painting. He was a particular admirer of George Romney, even offering him a room in one of the towers to use a studio. Sadly Romney declined. I wonder if it was in Caesar’s Tower. I hope that further evidence comes to light. If Wright made even a brief visit to Warwick it might lead to a reexamination of other work. Maybe there are some drawings?

Moonlight with Caesar’s Tower Warwick Castle is a terrific addition to Wright’s oeuvre – intensely beautiful, romantic and full of brooding atmosphere. It adds a new dimension to our understanding of his work in the last decade of his life. As this 1775 drawing by Paul Sandby shows, in addition to rearranging the rest of the space, Wright has also simplified the section of Caesar’s Tower, which is multi-barrelled in reality. His object is the tower’s expression rather than its specific detail; not an architectural illustration, but a haunting sonata.

Contrasting Wright’s painting with the earlier Canaletto is like setting Piranesi’s Veduti alongside his Carceri: it shows the Georgians’ changing aesthetic psychology, as they moved from the sunlight of pure Reason into the moonlit groves and shadows of Imagination.

One thought on “1100th Birthday Present for Warwick Castle”