Today is Boat Race Day*. My Grandmother said that when she was a girl it was a huge event in London. This painting of Hammersmith Bridge on Boat Race Day in 1862 shows just what she meant. I wonder if people still perched up on the cables like that in her day. Absolutely terrifying.  Dally supported Cambridge because she preferred light blue. She hoped I would go there for the same reason. 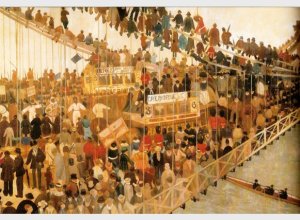 Boat Race Day was painted by Walter Greaves (1846 – 1930) when he was sixteen. Greaves was the son of a Thames waterman. He became friends with James Abbott McNeill Whistler when the American painter first came to London. Greaves took Whistler on the nighttime boat trips that inspired his Thames Nocturnes, and taught him to row; in return Whistler coached his painting. Greaves’s Whistleresque portraits of his mentor appear at auction from time to time, but Boat Race Day is his masterpiece and seems to predate Whistler’s influence.

Last night we watched the third and final episode of James Fox’s A Very British Renaissance. We hadn’t seen the first two episodes yet. It was superb – an unexpected treat to channel hop on a Friday night and hit on this:

Dr Fox took us through a quick course in how British art and culture caught up with the Continental Renaissance in the sixteenth and seventeenth centuries – slightly later than Europe, and with our own particular spin. Cookmaid with Still-life of Vegetables and Fruit 1620 – 25 by Sir Nathaniel Bacon (1585 – 1627), is a British take on the Dutch and Flemish still-life fashionable in the preceding century. Dr Fox said that it is the first example of the genre in British painting. Bacon also painted the first known landscape in British art, treating countryside as a subject in its own right, rather than just background.

The poetry that has made Donne immortal wasn’t published until two years after this death. His portraiture, like his verse, runs the gamut from the youthful libertine (acquired in 2006 by the National Portrait Gallery, London) to the aged widower fantasising his own death so he can rejoin his wife. 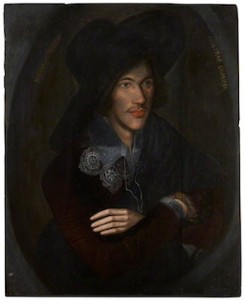 Donne sat for this dress-rehearsal for death in the shroud he kept ready for the occasion. Izaak Walton describes the occasion in Donne’s biography. The room was lit by several fires, then Donne undressed, put on the shroud and posed standing on an urn. The image was engraved head and shoulders, and then repeated exactly in his famous marble effigy by Nicholas Stone at St Paul’s. Donne hung the original on the wall by his bed as he lay in his final illness. I wonder what happened to it, and who the artist was.

I ought to read Thomas Burton’s The Anatomy of Melancholy. Burton was at Christ Church, my old college. The shots of the Upper Library were stunning. This library  – under-visited and increasingly difficult to just wander into – houses some remarkable things: Cardinal Wolsey’s red hat – which once belonged to Horace Walpole at Strawberry Hill – and a copy of Dr John Dee’s On Spirits. Walpole also owned Dr Dee’s ‘mirror’, the obsidian stone that Dee and Edward Kelly would use for divination, but that is now in the British Museum.

The Anatomy of Melancholy is said to be full of humour; reading, Burton says, is the perfect antidote to melancholy, keeping you busy and safe from self-indulgence in melancholic thoughts; unless of course you are reading about melancholy. I shall order it on abebooks. I can’t recommend them enough – sanely-priced second-hand books from small booksellers.

Dr Fox brings the curtain down on this golden age of intellectual leisure with Sir Anthony van Dyck (1599 – 1641) and his second visit to England in 1632. Van Dyck’s super-elegant, sophisticated painting is the English Renaissance candle burning brightest before it goes out; even as he was dragging British art into the seventeenth century, trouble was on the horizon, war clouds were gathering and everything was about to come crashing down in the Civil War. It was all the Puritans’ fault, Dr Fox said. As a glimpse of Renaissance England before the cataclysm, he showed us the Double Cube Room at Wilton, Inigo Jones’s glorious architectural setting for the collection of Van Dycks belonging to Philip Herbert 4th Earl of Pembroke (1584 – 1650). I’m looking forward to catching up on the first two episodes.

Lord Pembroke is a paradoxical figure though. Yes, he was central to the English Renaissance Arcadia. He was one of Shakespeare’s ‘incomparable pair of brethren’, and a great patron of art and literature. But appearances can be deceptive; he was also a Puritan himself – not a radical or a Republican, but one of the English Protestant tradition that had included Sir Francis Walsingham and Robert Dudley Earl of Leicester. When it came to the Civil War, Lord Pembroke was a Roundhead, one of the Parliamentarian peers known as ‘the Noble Defectors,’ a good chunk of whom had also been major patrons of Van Dyck. The Civil War was a complicated business.

And – as the creators of New Worlds (Channel 4, Tuesdays 9pm) remind us, more people in this country died – proportionately – in the Civil Wars than in the First World War. Small wonder that people had had enough of melancholy by the Restoration. We must watch New Worlds, but from the trailers I’m slightly worried. I don’t want to see King Charles II portrayed as a baddie. The writers are very into English Republicanism, The Good Old Cause, as it was called. If you’re that way inclined then 1649 – 1659 was a brief golden moment in our history, and a great missed opportunity. But the Republic never caught on here. The phrase ‘the Good Old Cause’ was used by the late 1650s, when already sounded nostalgic.

High-minded Republicans like Algernon Sidney could see themselves as Ancient Romans. Hardcore puritans like Praise-God Barebone could look forward to the End Of Days and the Last Judgement. But the rest of the population were practical people. They lived in the present and they realised, in Oliver Cromwell’s words, ‘the Government must have something monarchical in it.’ Republicanism was a spent force in England before King Charles II was invited back in 1660. Neo-Romanism and extreme puritanism both took root in America, though, so New Worlds is quite right there.

We won’t be watching the Boat Race in the pub. The Puritans would be very happy. We shall drink a great deal of coffee instead, which they called ‘the great soberer.’

*Edit: Today is not Boat Race Day; that’s tomorrow. I blame all the coffee. It does give me time to mention the paintings in this beautiful watercolour though. They’re like the  random accumulation you’d find on the walls of an old pub these days. There’s a Dutch brothel scene in a Lely panel frame; an old-mastery landscape being admired by two cognoscenti with a candle and a small-scale portrait of a man in armour. It looks like a reversed copy of Kneller’s portrait of the Duke of Marlborough c.1705. An overpainted print? Or a copy after a print? The small-scale copies of life-size portraits that appear at auction vary considerably in quality. High-end versions would have hung in patrons’ townhouses or as mini-galleries in their closets. The rougher examples must often have hung in taverns and coffee shops like this, particularly when they showed Royalty, politicians and celebrities of the day.