Last week I went with a friend of mine to have a portrait of his x-rayed. He had asked me to research it for him, and I asked him if I could write a post about it, because it was such a superb illustration of the ‘archaeological’ side of researching a painting.

Here is the painting as my friend saw it at auction. It was catalogued at auction as Sixteenth Century School, oil on panel. From the costume he reckoned that it must be Dutch or Flemish rather than English. There was a stencilled number on the back, which showed that it had been consigned to Christie’s at some point, and when he contacted Christie’s archive they confirmed that it had been sold from a Devon country house collection in the 1950s, as by Adriaen Thomasz Key (c.1544 – after 1589). Key was one of Antwerp’s leading portraitists in the a second half of the sixteenth century, a good name to have on a painting, and this made him take a closer look at it.

There was clearly a great deal of later overpaint on the face. This is an exciting thing to see. Auction buying is always a gamble to some degree, and the gamble here was whether the overpaint covered up a lot of serious damage, or whether it was an overzealous emulsion hiding some sound original work. Sometimes old restorers mend a small damage and then overpaint the entire surrounding area to blend it in.

So, my friend bought the painting and took it to his restorer. This is what it looked like when the overpaint was cleaned off – not entirely what he’d expected, but certainly more interesting. Under the later work the original paint surface was largely intact. Apart from covering an old split in the panel at the left, the overpaint had been a literally cosmetic job to make the sitter look younger. Now, looking her real age, our Antwerp lady had a real presence. This was a commanding woman, someone who assessed and gave orders. And along with her new authority of bearing, new symbols of status emerged from the old overpaint. Beautifully painted gold and enamel buttons appeared on her fur mantel and a double gold chain fastened down the front of her doublet. The crisp lace of her ruff stood out as a masterpiece in still-life drapery painting.

There was something else though. A lace collar began to show through beneath her chin, although the flesh tones painted over the top of it appeared to be original. This seemed to be a pentiment, where the artist had changed his mind part way through the execution of the portrait and altered the form of her costume. We were also perplexed by the thin white ring around her neck. What was it? How was it attached? Was that part of an earlier scheme too? Looking at other portraits of the 1570s this seems to have been a wire-supported collar, that might have attached to the headdress. I have found examples on other sitters that support a thin muslin gauze around the neck, and others that stand proud from the neck like this, but there is still nothing exactly comparable in any other portrait that I have seen. 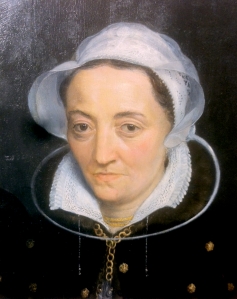 Our restorer put back the flesh tones over the frill collar on the neck, and filled in the losses along the panel split at the left, and this is the portrait after conservation. His work revealed the very free, vigorous brushwork our painter used in painting the face, and the rapid sketchy handling of the paint to create the hair where it just emerges from her cap. This is quite unlike Adriaen Thomasz Key, who is known for the meticulous, hair-by-hair treatment of detail. It is the signature style of his contemporary and friend Frans Pourbus the Elder (1545 – 1581), who was such a close associate of Key that when Pourbus died his son, Frans Pourbus the Younger, was apprenticed to Key’s studio. Comparison with other works by Frans Pourbus the Elder showed the same deft hand and broad modelling of the face and confirmed the attribution.

There was still the question of the costume though. Our restorer wondered what to do about the gold chain around the sitter’s neck. It was original to the painting, but it appeared to be part of the ‘first’ costume, represented by the high frill around the neck. He suspected that fashion had changed halfway through sittings, and so Pourbus had repainted the lady’s costume. It seemed a shame to cover up such a beautiful and well-painted detail, but it didn’t strictly belong to the painter’s final conception of the portrait. In the event we decided to let it stay, as a hint of the sitter’s original dress.

My friend who owns the portrait is tireless in getting to the bottom of things, and so he decided to have the painting x-rayed. This is the result. 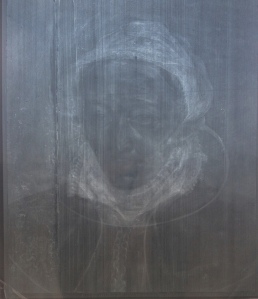 As you can see, the frill collar at the neck now stands out as the artist originally painted it, and the gold chain can be seen where it originally went round the sitter’s neck. But there is another detail. There are two curved shaped on the sitter’s shoulders, edged in lead pigment, so either white or yellow, almost like the shoulder-pieces of a suit of armour. I went back to the archive and looked through portraits by Key, Pourbus and Pourbus’s father Pieter Pourbus (1523 – 1584) to see if there was a mid-sixteenth century fashion that would explain this. I was glad to find several portraits showing women wearing a sort of heavy cloak over their shoulders, with a white trim and lining, with a frill collar round their neck and heavy gold chain knotted and worn double down the front. Here is an example in colour from atheneum.org, Pieter Pourbus’s 1551 portrait of Jacquemyne Buuck.

Our sitter’s chain isn’t knotted like this, but it must have been in life, so I wonder if the painter either didn’t complete that detail before the plain changed, or whether he scraped that part of the surface flat in order to paint over it more easily. From comparison with other examples, our painting seems to date from the period, c.1570, when this fashion changed. Details like this, imagining the conversation between the lady and Frans Pourbus about her portrait – the moment they decided it must be repainted, and the glimpse of their world it gives you –  remind you that as well as being a concrete thing in front of you this portrait is also a frozen moment of time in their lives, in Antwerp 350 years ago.