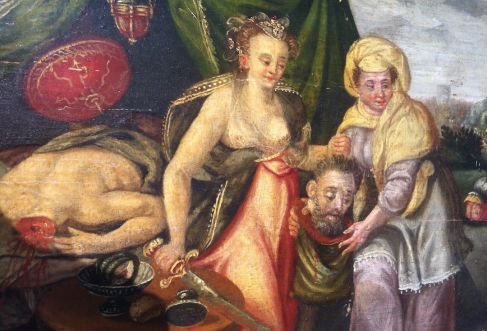 Paul Taylor, Curator of the Shakespeare Birthplace Trust, has just featured this panel painting on the Trust’s website.

I first saw the picture in an auction catalogue, where it was catalogued as Nineteenth Century, but it jumped out immediately as an authentic piece of sixteenth century popular art. It didn’t disappoint when I viewed it at sale. Everything was what I would have hoped for in a sixteenth century painting. The bowing of the oak panel. The dense craquelure of the paint surface richly patinated with dirt and old varnish. And when I held it up to the daylight the bright, clear colours sang out through the grime. The figure of Judith even had a look of Queen Elizabeth I. This was no coincidence. Judith, fearless, cunning and beautiful Israelite champion was identified with Queen Elizabeth by contemporaries. As Alison Weir says in Elizabeth the Queen ‘poets eulogised the Queen as Virgo, Pandora, Oriana, or ‘England’s Astraea, Albion’s shining sun’, while the Protestant establishment saw her as a new Judith or Deborah.’ (Pimlico 1999 p.223)

When war with Spain looked imminent throughout the 1570s and 80s, this muscular incarnation of the Queen became even more popular. It would have been an inspiring and comforting image, a succinct expression of defiance and victory, like a Churchillian bulldog. It may even be that Holofernes’s severed head is meant to resemble King Philip of Spain. Certainly there is no doubt – and I thank Dr Susan Doran for supporting the suggestion – that the Elizabethan viewer would have read the painting as a two-fold narrative, with one meaning superimposed on the other. The Israelites and the Philistines were the twin image of England and Spain.

Writing in 1588, four months before the Spanish Armada appeared off our shore, Thomas Deloney writes in ‘The overthrow of proud Holofernes and the triumph of vertuous Queene Iudith’:

for them that in him trust:

When earthly hope is all in vain,

He takes us from the dust.

And kept us from decay:

As may be seen this day.’

As a Stratfordian by birth it was a privilege for me to be able to place the painting with the Shakespeare Birthplace Trust. Paul Taylor’s website entry mentions the important fact that ‘Shakespeare named his second daughter Judith knowing the associations with a strong and devout Jewish woman from the Old Testament’, superb evidence of the powerful hold Judith’s story had on the Elizabethans’ imagination, and on their conception of themselves.